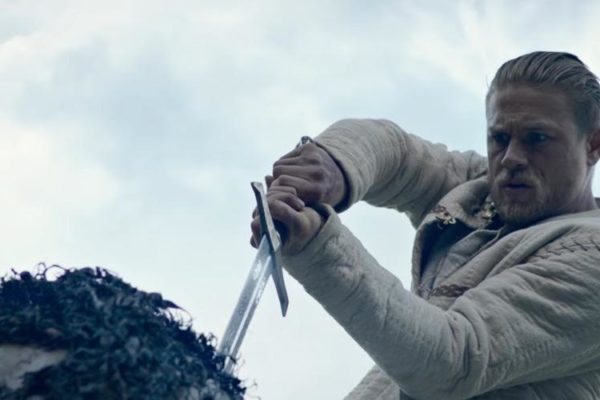 In Macbeth, one of his better plays, William Shakespeare wrote: “It is a tale, Told by an idiot, full of sound and fury, Signifying nothing.”

When he jotted that down Shakespeare thought he was talking about life, but what he was really describing was the character of 21st blockbuster movies. Well, most of them anyway.

If the sprawling, ugly, largely incomprehensible mess of King Arthur: Legend of the Sword is anything to go by, Guy Ritchie has now consolidated his status as the worst “A List” director working today.

He has taken the Arthurian story and mashed it into a mega slice of FX-driven drivel, an empty-headed, post-content visual stew that reduces the legend to multiplex mulch, full of blurry effects and frenetic editing. It’s essentially a three-second epic, where the average length of a shot is about three seconds.

Charlie Hunnam (Sons of Anarchy) is at the dead centre of this debacle, with Eric Bana popping up in between attacks by giant elephants and monster snakes.

In 2004 Clive Owen starred in King Arthur, a pretty good, and much better reworking of the tale. And, of course we have other films such as Camelot, Excalibur, First Knight and even Monty Python and the Holy Grail, each of which at least had some passing respect for the saga.

Ritchie’s ability to drive a narrative seems confined to meaningless motion. He loves thuggish, growling accents and anachronistic dialogue. When going into flashback, he uses montage techniques that look like bad television. The VFX sequences are muddy and lack distinction, often appearing to have been ripped out of Harry Potter or Lord of the Rings. The film looks like a $175 million showreel of somebody who doesn’t know what he’s doing.

And the seal on that is in the film’s overriding quality: it is thunderously dull. King Arthur: Legend of the Sword is easily one of the leading examples of same-same, post-content 21st century cinema thus far.

One only wishes it was the last.

A sumptuously decorated historical drama from veteran director Guridner Chadha (Bend It Like Beckham) that recounts the final days of Britain’s domain over a divided India.

With Hugh Bonneville (Downton Abbey) and Gillian anderson (X Files) putting on their best plummy accents as Lord and Lady Mountbatten, Chadha shows off the lavish locations with relish while showing how the sweep of history played out among the staff of the huge house in which the Mountbattens oversaw the separation and division of India.

A fine, prestigious drama designed to commemorate the 70th anniversary of the event, fans of Winston Churchill won’t much like the film’s recently discovered revelation of his part in India’s transformation, which was one of Chadha’s motives for making the film.

Check out our interview with Gurinder Chadha

Daniel MacPherson plays a pilot who defies corporate orders and escapes the cushy confines of a space station run by a stern if twitchy commander (Rachel Griffiths) to rescue his daughter (Tegan Croft, in an impressive performance) from the planet below before it gets wasted.

The deal is that the company has been running a secret program in a prison facility, but the whole thing has gone south, resulting in large, ugly monsters being unleashed upon the landscape, so the only way to cover up the misdeed is to destroy the place.

One of the clear objectives of this film is to show how even low-budget sc-fi fare can deliver Star Wars standard visuals, and on that score it succeeds admirably. The budget’s limitations are noticeable in some of the scenes in an overrun city, where the need for wide shots and bigger action aren’t satisfied.

Storywise, Abbess is also a little too eager with his jump cuts, which often land you in a confusing place as you try figuring out what is going on.

As well-crafted as the film is, it bears an over-sized a fanboy vibe that will likely play better on home screens. That said, it is an enjoyble, efficient lark. Abbess plans on making a series of films, and this certainly points to great promise.

If you liked the first one, you’ll positively love this next installment in the straight-faced action franchise starring Keanu Reeves as a hitman who absolutely everybody wants to kill.

Director Chad Stahelski, who did the the first one in 2014, presides over some brilliantly choreographed mayhem that includes some ballet-like vehicular carnage, hand-to-hand combat and loads upon loads of intricately staged gunplay.

Alongside his love of long shots – something especially difficult to pull off in an action film – the film also boasts one of the best visual effects sequences we’ve seen in yonks that takes place in a venue covered in mirrors.

It’s non-stop, hands down action all the way here, with the promise of a third chapter to come. All we can say to that is – Yay!