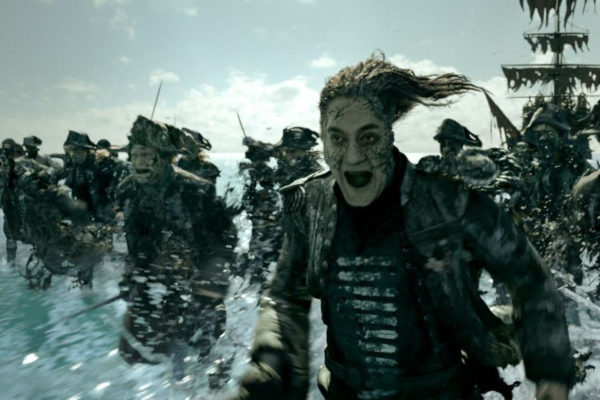 Just when Disney’s sea-faring fantasy franchise seemed all set to founder comes a leaner, cleaner installment that easily qualifies as the best-paced and most enjoyable of the lot.

This could, to some degree, have something to do with there being much less Orlando Bloom in it. Also, the second and third films stand as among the most greivous examples of brand-driven post-content 21st century filmmaking, so the film also benefits by comparison for at least being comprehensible.

He wants to bring his dad back from the dead, but the only way he can do that is by harnessing the magical power of Neptune’s Trident, and the only way he can get to it is with the help of Jack Sparrow (Johnny Depp), the swaggering foundation stone of the franchise.

En route he ensnares the proto-feminist Carina Smyth (Kaya Scodelario) who narrowly escapes persecution for being a witch over her belief in science. This occurs during an impressively mounted sequence where an entire bank is dragged through a coastal town.

Geoffrey Rush steps in with major support as the evil spectre of Javier Bardem joins the chase for the trident. It’s a delightful case of ham versus ham.

In contrast to the swirling blur of visual effects that cursed the first three films – the style of On Stranger Tides seemed to settle down a bit – the spectacle here bears a lot more clarity and imagination, the blending of fantasy into the pirate realm working and looking better than ever before. Of special note is a parting-of-the-ocean sequence that would have given Moses a run for his money.

Could we have lived without another Pirates film? Of course. Still, if they were going to make another, they at least had the good sense to include dashes of inventiveness amidst all the mandatory over-acting.

Continuing his run of terrific latter-career performances, Richard Gere shines as a shyster who politely lies and exaggerates his way through the New York business world until an ‘accidental’ encounter with an Israeli politician, who later becomes prime minister.

As Norman Oppenheimer, Gere infuses his low-level, ever-smiling operator with the energy of an eternal optimist whose delusions of importance are matched with an inherent integrity you can’t help but admire. It’s an increasingly engrossing portrait with Gere, still at the top of his form after top turns in The Benefactor, Hachi: A Dog’s Tale, Arbitrage and The Second Best Exotic Marigold Hotel.

On the verge of depression and desperate for meaningful human contact, middle-aged loser Wilson (Woody Harrelson) hooks up with his disaffected wife Pippi (Laura Dern) in an effort to squeeze some measure of happiness back into what he realises is an empty, largely wasted life.

Refusing to become a full-time curmudgeon, and with no respect for personal space, he maintains a defiantly upbeat outlook, his attempts to connect with people in cafes and public toilets offering funny reflections of a man desperate for any sort of relationship.

So it’s a game-changer when Pippi reveals that he is a father. Suddenly, it seems, his life has an emotional core.

Directed by Craig Johnson (The Skeleton Twins) – taking over from Alexander Payne (About Schmidt), who would have been a perfect fit for this film – and based on the graphic novel by Ghost World’s Daniel Clowes (who did the screenplay), Wilson is one of those unheralded, unpretentious films that offers unpolished truths about human nature and the awkwardness that comes with honesty.

Please don’t let this small gem of a film slip by you.

Replete with interviews, archival materials and footage of Whiteley trying to describe himself, director James Bogle does a great job illustrating his life and the impact of his work, with much in the film suggesting how far ahead of his time Whiteley was.