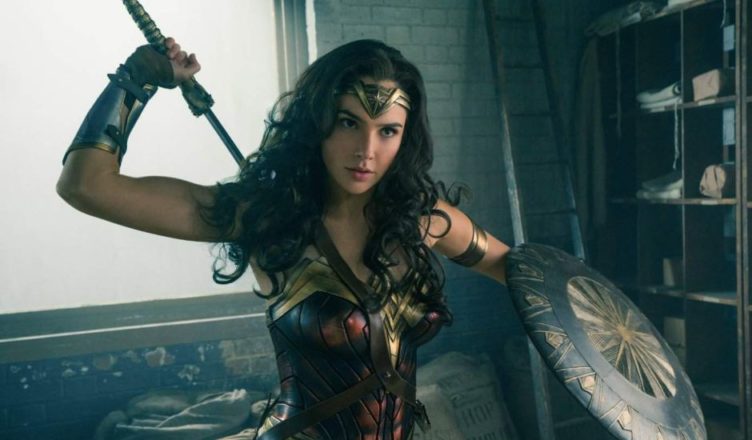 We’ve waited long enough for a decent female superhero movie to grace us and, given the few flailing attempts of the past – Electra; Catwoman; Supergirl (the 1987 movie, not the swell TV series) – the big question is: has the wait been worth it? The answer, happily, is yes – if only barely.

Israeli actress and former model Gal Gadot (she was in four Fast & Furious films) takes on the mantle of the immortal Diana, daughter of Zeus, the God of Gods.

Living on an invisible, female-only island she is trained by Amazon warriors to face down the inevitable arrival of the evil God Ares, enemy of Zeus.

Eager to be her own woman, Diana gets involved fighting for the Allies in World War One when an American pilot (Chris Pine from Star Trek) pierces the island’s cloak of invisibility in a stricken plane and recruits her to his mission of destroying a secret poison gas program cooked up by a renegade German officer (Danny Huston) and a disfigured scientist (Elena Anaya).

Given how the superhero genre has been awash with testosterone pretty much since it was kicked off by 1978’s Superman, the need for a credible female hero has been growing, and the one delivered here has all the killer skills and defiant personal qualities required. She won’t be ordered around – not by men, not by her mother – and is always the first into battle. Hence the film is full of “you go, girl” moments designed to please the genre’s long-neglected female demographic.

Yet Diana seems far more confident than the film’s director, Patty Jenkins, whose last work of note was the Oscar-winning 2003 film Monster with Charlize Theron.

To be frank, as a narrative the film is over the shop, with huge story holes, inconsistencies and continuity lapses that are, at times, breath-taking.

For instance, watch for the vanishing German destroyer, a big-movie blooper only possible in this era of post-content cinema. Then there’s the matter of how Diana manages to conceal a large, heavy sword inside a skimpy ball gown. Why can’t the Amazons see beyond their dome of invisibility? Are they immortal or not? How do they reproduce? And why does Diana suddenly behave like a ditz in a rom-com when it comes to being with a man for the first time?

Even Diana’s battles with the German infantry are awkward. While they are well-staged, using that insta slo-mo device we were introduced to in 300, they feel odd, given how Diana pities all soldiers in the war as being innocent pawns manipulated by a greater evil. So why take such glee in killing them?

Ah, all this nitpicking. Perhaps, long ago, filmmakers might have cared about such lapses in logic, but the brief of Wonder Woman is not to make coherent sense but to conjure enough rousing big-screen girl-power action to spark a new femme-focused franchise, and on that score it acquits itself well enough.

The welcome doses of humour help make the film’s many shortcomings forgivable, and Gadot fills the form-fitting uniform vacated by Lynda Carter, who played Wonder Woman on TV from 1975 to 1979, with honour, sass, just the right amount of sexiness and, most importantly, the ability to lay waste with the aid of a huge VFX team.

Set in a ramshackle mansion in 1979, this meandering, centreless ensemble comedy-drama stars Annette Bening as an ageing single mother who fills her large house with young, eccentric tenants while trying to raise her teenage son (Lucas Jade Zumann). Writer/director Mike Mills, who gave us the fabulous film Beginners, tries hard to inject style into this semi-biographical coming-of-age yarn, but it’s a long, slow haul.

Bening shines as a failed woman trying to show direction who has to recruit others to help advise her son in the ways of love, but the film is too rambling to generate much warmth, even with support from Billy Krudup, Elle Fanning and Greta Gerwig. The film was nominated for a best screenplay Oscar and has been a darling of American critics.

Crude as hell and full of self-references, this loving parody of the 1990s hit series stars Zac Efron and Dwayne Johnson in a sun-filled party-like lark full of sand, sun, surf and slo-mo.

Though Efron and Johnson begin as rivals – the former is a fallen sports celebrity, the latter his means of redemption – a bromance inevitably develops as they go on the hunt for corrupt local politicians and a master criminal played by Bollywood mega-star Priyanka Chopra.

It’s a slick, well-directed diversion, with a neat B-story involving a relationship between sexy lifeguard CJ Parker (Kelly Rohrbach in the role made immortal by Pamela Anderson) and flabby schlub Ronnie (Jon Bass), who, presumably, is intended to embody the average male who watched the show. This is the film indulging in a bit of clever wish-fulfillment.

On a point of order, the film is commonly referred to as an adaptation of the TV series, which isn’t exactly the case. It uses the brand, setting and character names and mulches them into an affectionate parody, spiced by the kind of raucous adult-comedy we’ve seen dozens of times.

What would have been more challenging, and thus much harder to do, would have been to side-step the parody route and do a straight-faced adaptation that replicated the spirit of the show that enjoyed an audience of about a billion.

Still, what we’ve got here is good enough to warrant cameos from David Hasselhoff and Pamela Anderson, as well as the promise of a sequel.

In the style of Snowtown comes a remarkable, haunting debut film from writer/director Ben Young about two disturbed suburban serial killers (Stephen Curry, Emma Booth) who prey on teenage girls. Ashleigh Cummings plays their latest victim, lured one night into their home with the promise of a drink and cheap weed.

Using long takes and deft editing to great, unsettling effect, Young creates a horrific, increasingly tense atmosphere among the ordinary trappings of a mid-range house as the captive girl observes the interplay of her two tormentors as she tries figuring out her best plan of attack.

Admittedly, the film does stumble in its final reel. Having established such a high degree of realism, Young then asks us to forgive lapses in police procedure and normal human nature so as to swallow his finale whole. It doesn’t quite come off, and is the only part of the film that veers toward the conventional.

That debatable quibble aside, Hounds of Love is a splendid example of tense, throat-tightening horror, made all the more vivid because of its everyday setting.

And the performances are searing, especially from Curry, who inverts his funnyman reputation (The Castle; The Nugget) to deliver the scariest human monster since Daniel Henshall’s work as John Bunting in Snowtown. It really will send shivers through you.

An under-reported movie phenomenon of late – partly inspired by the success of The Passion of The Christ – is the quiet box office success enjoyed by “faith based” features in the United States. Often made by specialist divisions of major studios on modest budgets, and with overtly religious themes, they play to large crowds, but often draw little attention.

The Shack is the latest in this growing sub-genre and has already taken about $100 million at the US box office against a small budget of about $20m.

It stars Australian actors Sam Worthington (Avatar) and Radha Mitchell as a couple who lose their youngest daughter in the most horrific of circumstances. Yet while she is able to move on, he remains tortured, almost paralysed by anger, guilt and powerlessness.

The film deals in starkly spiritual terms with the issues of loss, hatred and forgiveness, and raises a lot of common questions about who’s side God is on.

The strong first half of the film, which plays like a well-made conventional thriller, does give way to a lot of flowery dialogue and symbolism that some might find cloying and a tad tiring.

That said, the film arrives on our screens at an auspicious time. Embracing the concept of forgiveness for those who have wronged us is a tough call at the best of times, but given what’s going on in the world at the moment, it’s hard to imagine even the most devout extending their sympathy for murderers who, by any fair measure, scarcely qualify as human.

In a brave performance, Worthington brings a salty edge to his character, especially when engaged in discussion about some of life’s biggest and hardest questions. The one he can’t quite get an answer to is why God, who is meant to be good, allows evil such freedom. Not even co-star Octavia Spencer seems to be able to help him with that one.