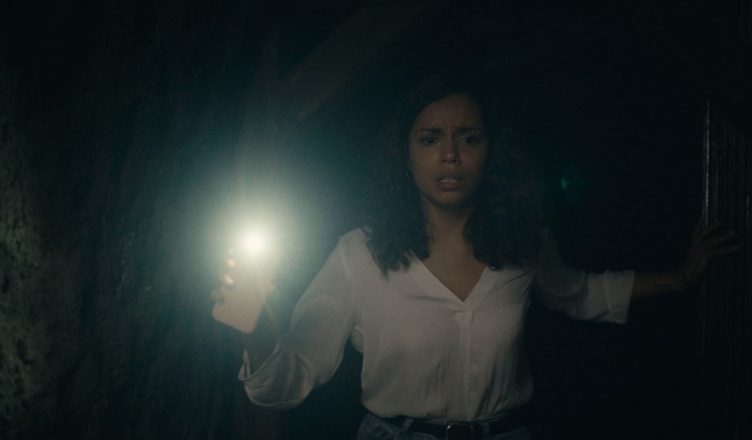 Who goes there?: Tess (Georgina Campbell) inspects her rented house in ‘Barbarian’.

Jumping straight to the head of the contenders queue for Best Horror Film of the Year comes the Barbarian, a fiendish delight that plays well outside the box of tricks we typically get with spook movies.

Whatever surprises and twists a horror film might contain, by and large we usually know where we are with the story and what the likely outcome will be.

What starts out as a seductive, off-the-shelf frightfest, the film politely obeys all the genre rules before steering left, then left again, and again. Writer/director Zach Cregger, an actor and comedian, masterfully builds tension and mystery throughout, all designed to tease you and have you thinking “what the heckfire is going on?”

The fun begins when Tess (Georgina Campbell), a young job-hungry woman, arrives late at night in heavy rain at a rented house in the decrepit part of Detroit.

She’s keen to get warm and dry and into bed so she can be fresh for her interview the next morning for a research position with a local documentary filmmaker.

Tut, she discovers the place has been double booked, finding a man called Keith (Bill Skarsgård) already cozily ensconced and clearly not expecting any visitors.

Being a smart girl, she is immediately suspicious of the circumstance and it’s only after some very well-handled awkwardness that she slowly lets her guard down and agrees to stay the night.

From that spooky, suspenseful point Barbarian blossoms into the most magnetic and inventive horror film we’ve seen thus far in 2022, with plenty of convention-loving yet cliche-averse storytelling to suck you in to a premise that cleverly refuses to reveal itself until it’s good and ready.

The film has already proved a hit in the US, again demonstrating the power of the ever-reliable horror movie business model – that is, keep the budget low (in this case about $US4 million) and the box office returns shall flow. Provided, of course, you haven’t made a stinker.

This isn’t that. Barbarian is a newly-minted gem of the genre, skilfully made to keep your keester on the edge of your seat, your eyes glued to the screen and your mind wondering “where on Earth is this going?”. What a beaut.