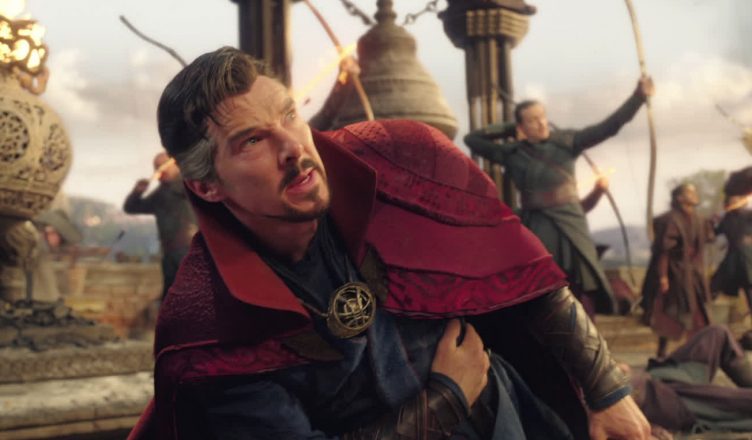 Story scribble: Benedict Cumberbatch in ‘Doctor Strange in the Multiverse of Madness’.

DOCTOR STRANGE IN THE MULTIVERSE OF MADNESS ** (126 minutes) M
Time was when superheroes were something special and awe-inspiring. Now there are so many of them they barely raise an eyebrow.

In Doctor Strange in the Multiverse of Madness we have a telling scene where Dr Strange (Benedict Cumberbatch), dressed in his full regalia, is sitting with his new friend America Chavez (Xochitl Gomez) in a crowded New York café. One person comes to take his picture. Nobody else cares.

That’s about the level of wonder in the latest Marvel bland-out, a steep step down from Spider-Man: No Way Home, which clocked in as arguably the best Marvel film to date.

In a typically cyclonic assault of congested storylines and VFX blizzards the good Doctor teams up with the young America to do battle against Wanda (Elizabeth Olsen) by travelling through various multiverses in search of some friggin’ book that has a spell or a recipe or whatnot that’ll make everything right.

The film is a jumble of half-baked ideas and silly, eye-rolling concepts about alternate selves, universes crashing into each other and inter-dimensional councils that have the same standard of security guards we usually see in Bond films.

There’s magic and wizardry and sorcery all over the shop, the film is stuffed so full of characters with superpowers it’s hard to keep track and the whole multiverse conceit keeps the swish-panning visual effects cascading off the screen, leavened only by the occasional comedy bit.

All this ruckus, however, can’t conceal the film’s glaring central flaw, namely that there’s nothing human at stake. Marvel has been churning out these superhero flicks at such a clip they’ve finally managed to produce one that forgets to put humans at the heart of the mayhem.

It’s another $250 million lump of cinematic tofu, distinguished only by hitting a new extreme in woke virtue signalling.

Throughout the film America wears a colourful badge of the Puerto Rican LGBTQI+ community on the front of her jacket, prominently placed in the frame so it’s impossible to miss.

Good on her – but given that it’s put in your face for most of the film does it have anything to do with the story?

Look, Doctor Strangelove in the Multiplex of Mediocrity isn’t a bad film exactly, but it is a blancmange that is expensive as it is forgettable.

And, frankly, it’s a bit of a shock to see the shemozzle was directed by Sam Raimi, given how good he usually is at putting distinctive touches on big films.

In his Spider-Man trilogy, for instance, he excelled at sculpting VFX sequences as if they were works of art. Take the Sandman scene from Spider-Man 3 (a perfectly fine superhero film, despite being much-maligned). Or the crane sequence.

Nothing like that here. Even Raimi’s early Evil Dead films had more panache visual panache than anything on show in Dr Strange 2. And he did it on a budget that wouldn’t have covered the catering on this.