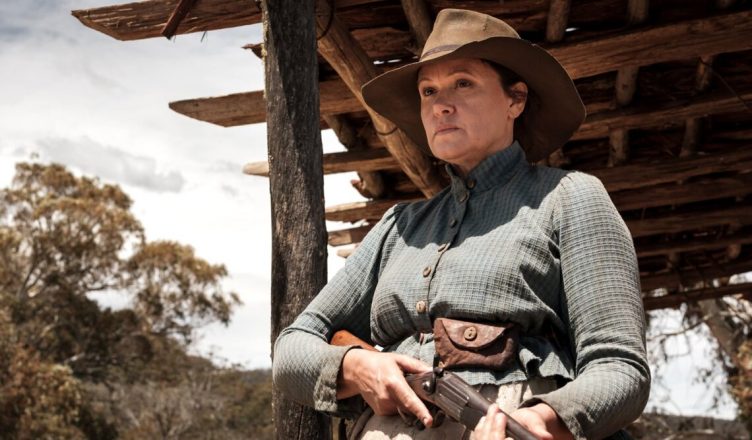 Have gun, will point: Leah Purcell as a feisty frontier woman in ‘The Drover’s Wife’.

THE DROVER’S WIFE: THE LEGEND OF MOLLY JOHNSON ** (108 minutes) MA
While it mounts a noble attempt at spinning a sprawling Aussie frontier drama, The Drover’s Wife founders on its lofty tone, its sense of self-importance punctured by patchy storytelling, some baffling continuity knots and anachronistic fumbles that have characters from the 1800s speaking like Millennial activists.

Molly (Leah Purcell) is a tough-as-nails frontier woman, a character point hammered in from the get-go.

When she’s not holding a broom sweeping away at the dusty ground in front of her shack (it’s never explained why she does this) she’s pointing her double-barrelled shot gun at anyone silly enough to underestimate her.

One such fool is Yadaka (Rob Collins), an indigenous fellow trying to outpace the local plods who are after him for a series of murders he swears to Molly he didn’t do.

His charming manner and highly articulate way with words suggest more of a misunderstood nice guy rather than a killer. So Molly, hard woman though she is, finds him handy to have around, especially when it comes to mentoring her son and helping out with the delivery of her fifth child. Talk about trusting a stranger.

Molly has already met the new local police chief, Sergeant Nate Klintoff (Sam Reid), and his lovely, amazingly progressive wife Louisa (Jessica de Gouw) as they arrive to set up in the nearby town.

As the police begin investigating the slaughter of a prominent local family, we begin learning of Molly’s backstory, which is delivered with unwieldy dumps of exposition.

The film, written and directed by Leah Purcell, is based on her acclaimed, award-spangled 2016 play, which, in turn, was inspired and freely adapted from the 1892 Henry Lawson short story. She also wrote a novel and has been hankering to make the film, so she’s obviously close to the material.

While that might give the making of Drover’s Wife a nice backstory, alas, it counts for nought when watching the film, which is often confounding rather than captivating.

It’s Purcell’s first feature film as a director and the many story potholes in Drover’s Wife suggest it might be a case of over-reach – or, to put it more bluntly, biting off more than she could comfortably chew.

Permeating the film is such a strong compulsion to say Very Important Things about colonialism, injustice, equality, violence and respect for culture that the film willingly sacrifices drama for tub thumping.

For instance, the overlay of feminism across the narrative just doesn’t stick – or, rather, it sticks out like a modern filmmaker using a period film to advocate a cause with the subtlety of a very modern bullhorn.

Thus we have the proto-feminist Laura wanting to start a news pamphlet to raise community awareness about battered wives and equal rights. She even proclaims how important it is to give a voice to those who lack representation.

No doubt there were strong-willed social justice warriors in 1800s Australia, but great doubt they spoke as if they were spouting op-eds on Instagram.

Consequently, the more didactic The Drover’s Wife gets the duller it becomes, morphing from a potentially compelling drama to a muddled polemic so sure of itself it doesn’t mind literally writing its message in large letters and parading it centre-frame. Ehh.

The film even has issues with basic matters such as scene setting – so, how far or close is the town from Molly’s home? – and continuity, with the film sporting some belated attempts to clarify early story riddles.

Though the film looks great – kudos to cinematographer Mark Wareham – the spots of magic realism come over as clunky and contrived, as if they were a hasty after-thought.

Performance-wise, the film presents a real mixed bag, with a stiffness running through some of the lead turns, especially from Purcell who, as Molly, is stony rather than steely, her face mostly locked into a defiant grimace.

Purcell has proved herself a fine actress in films such as Lantana and Jindabyne but her shot at directing herself here goes sideways – much like the film.

It’s a big disappointment. The Drover’s Wife could have been a classic. One can only wonder how the film might have turned out in the hands of a more seasoned director.