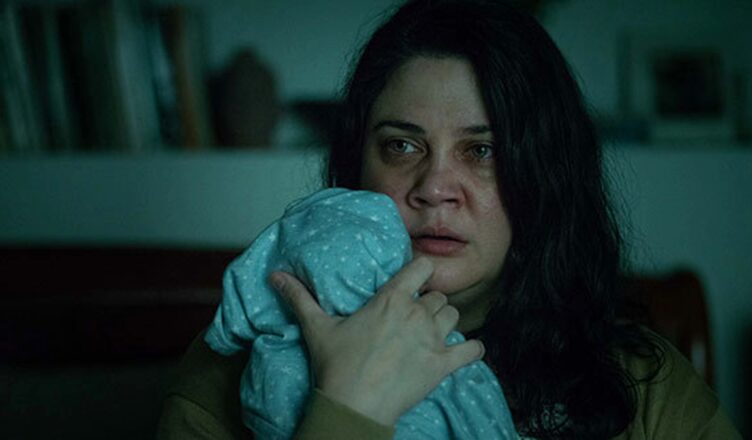 Hold on tight: A mother fears a ghost wants her baby in the horror short film ‘The Moogai’.

The art of the short film demands that brevity be an asset rather than a liability, a distinction that often trips up ambitious filmmakers aiming to serve up their cinematic punch inside a few scant minutes.

Here’s a selection of shorts that span the spectrum from excellent to not-so-great. They’re all Australian, but for the first and final.

In The Giverny Document (Single Channel) director Ja’Tovia Gary invites black women on the streets of Harlem to give her their views on how safe they feel. Some feel fine – thanks be to God, Jesus and situational awareness – while others, mainly young women, feel less so. Footage of cop-on-black violence are frenetically inserted at random moments along with combat shots of American missiles hitting targets, Nina Simone performing Feelings and wild animated patterns. At 41 minutes, the film seems to make its point well enough without all the flashy avant-garde garnish.

Much better and sharper is the supporting Australian short feature Day in the Life (dir: Karrabing Film Collective; 32 minutes) that pungently documents the shabby conditions in which the Indigenous folk of a remote township live. A wandering soul wanting to cook some breakfast discovers there’s no power, no water, no help from neighbours and no mobile signal, his predicament underscored by sharp montages of quotes, captions and archival footage describing how bad the general situation is. As an art-film polemic, Day in the Life is very good, indeed.

For sheer genre-based fun it’s hard to beat The Moogai (15m), an excellent, compact little horror treat from director Jon Bell (writer on The Warriors, Black Comedy, Cleverman) in which a new mother (Shari Sebbens) lives in fear that a spirit wants to steal her baby. A real knockout, this, with Meyne Wyatt especially good in the all-important role of the supportive but doubting husband.

We get a strong taste of culture clash in Victoria Singh-Thompson’s Don’t Forget to Go Home (12m) as two teenage girls abandon a wedding to go raving, leaving their tradition-loving family to grow sick with anger and worry. Some very good handheld camerawork here with strong location work and good production values that make the film look like it had a decent budget.

On the same strong par are:

Madeleine Gottlieb’s Laura (13m): as two teen boys catch up after a long time apart to ruminate over their lives-in-progress and events at their high school, a long-held secret slowly surfaces.

Tâm (12m): Director Nora Niasari and actors Jillian Nguyen & Nick Barkla capture the aftermath of a night-gone-wrong with in-your-face frankness in a single camera take. With special kudos to cinematographer Sherwin Akbarzadeh, the film is both technically accomplished and a cutting commentary on predatory behaviour. Bold, remarkable.

Call History (10m): The tortures of digital communication are given their ironic due by Lillian Paterson as a young woman (Zoe Terakes) with personal trouble and in need of contact finds little more than frustration from her device. Great use of close-ups, enhancing a terrific central performance, though the sudden end makes it feel like there’s a scene or two missing.

A similar issue comes up in Jamie Helmer & Michael Leonard’s The Diver (12m) where a strong set-up – a crayfish-diving teen has images of his living father drowned – builds slowly, then suddenly ends. Should short films be self-contained or play like snippets from a larger work? Good argument starter.

To finish, much lauding and praise has been showered upon Nimic by “out there” Greek director Yorgos Lanthimos (The Lobster; The Killing of a Sacred Deer; The Favourite which won a best actress Oscar for Olivia Colman). The nonsensical story involves a cello player (Matt Dillon) whose chance encounter with a fellow commuter sparks a mini-nightmare about identity obliteration. Some think it’s brilliant but, in line with much of his work, it unspools as pretentious twaddle. No disrespect.

LA LLORONA ***1/2 (97 minutes)
You can escape justice, but can you ever escape your conscience? That’s the poser at the heart of director Jayro Bustamante’s sinister horror film where politics intersects with the supernatural, and the outcome is positively nerve-racking.

In a sensational verdict he is legally let off, though the crowds baying for his blood don’t swallow it and surround his mansion, chanting away and keeping a 24-hour vigil. Even his servants want to leave his service.

Enter new maid Alma (Maria Mercedes Coroy), a beautiful young woman with long hair and a haunting air who seems to embody the menacing presence of the “Weeping Woman”, a legendary spirit of local lore.

With slow, unsettling camera moves and deft use of the dark, Bustamante conjures an increasingly claustrophobic atmosphere as the general is slowly forced to confront the evil deeds of his past.

MARTIN MARGIELA IN HIS OWN WORDS **1/2 (90 minutes)
Fans of fashion history are the ones most likely to get the most out of this very well-made, very well-researched profile of the enigmatic designer Martin Margiela.

Unlike his flashy peers, Margiela stepped back from the spotlight so people could focus on his innovative creations. He is even kept out of frame as he provides a reflective narration for much of the film, along with various admirers and collaborators.

As a study of an artistic evolution, there is some broad interest in Margiela’s unpredictability, which includes a partnering with the very conservative Hermes brand, a move that cost him a lot of fans. His love of Barbie dolls is also noteworthy and admirable for the way they helped give form to his passion.

Still, as polished as it is, including lots of archival footage courtesy of his mother, it’s not really a film designed to attract anyone who doesn’t already have a standing interest in Margiela’s work or the world he so colourfully inhabited.

For more details about MIFF programs and tickets visit https://2020.miff.com.au