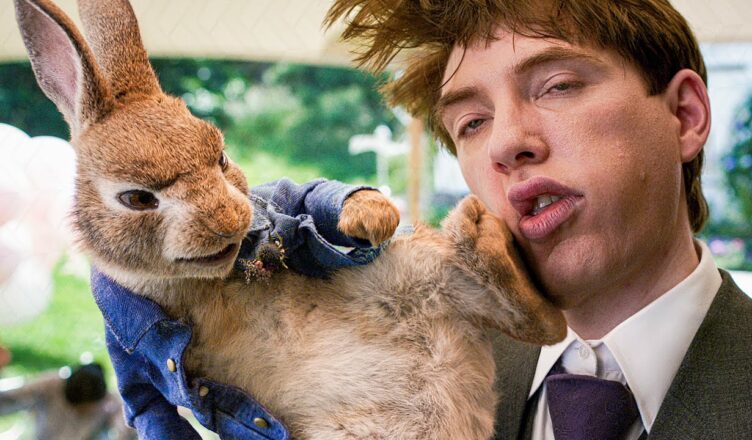 PETER RABBIT 2 *** (93 minutes) G
After a year-long delay that was no fault of his own, the bunny is back, along with his gang of fellow rodents – Flopsy, Mopsy, Cottontail, etc – and his new human pals, author Jemima Puddle-Duck (Rose Byrne) and former enemy Jeremy Fisher (Domhnall Gleeson).

As beautifully animated as the first film, and with another scene-stealing performance from Gleeson, Peter Rabbit 2 is not a bad little jaunt for a sequel.

It’s sufficiently fast, funny and family-friendly, though the film, again directed by Will Gluck (Easy A, Fired Up, Friends With Benefits) does sag a bit in the middle.

Things are looking up for Jemima, whose modest little book about Peter has attracted the attention of big-time London publisher Nigel Basil-Jones (David Oyelowo, so good as Martin Luther King Jr in Selma).

He loves the book and wants to do more, only he insists that Jemima introduce some crass changes to help sales, all of which she happily agrees to, artistic integrity be damned.

Not so happy with all this is Peter (voiced again by James Corden), who does not like the way he has been characterized as a mischief maker.

In anger he hits the mean streets of London and happens upon some underworld characters who give him license to play up to the mischievous stereotype that has been thrust upon him.

So begins a nicely etched story arc about the price you pay for not being your true self, a theme that has permeated almost every animated feature film since 1990.

While Peter gets involved in a heist plot, an admittedly more interesting storyline develops with Jemima and Jeremy, who is somewhat alarmed at how willing his new wife is to sell out her principles for a lot of money.

It’s a bit of a pity the film didn’t play around with this idea more, but the proficiently staged action as Peter gets into deep trouble keeps the film from losing its pep.

The film’s closing credits do remind you that, as wth the first film, much of the talent and financing for this film came from Australia.

Now, when Peter Rabbit hit big at the local box office in 2018, taking more than $26 million, it was duly heralded as an Australian film success story.

It was filmed here, post-produced here, there’s a lot of Australian talent in the voice cast and in the production, especially with the wonderful digital animation from the Oscar/BAFTA-winning Animal Logic production powerhouse.

Still, the director, Will Gluck, is American, and the Beatrix Potter source material is about as English as you can get, as is the story’s idealized setting.

So, given how often notable figures in the industry talk about how important it is for Australian films to tell Australian stories in Australian voices about Australian culture and so forth, do films such as Peter Rabbit 1&2 step up to the rhetoric?

Is this the basis for an important debate? Or is the question a symptom of cultural cringe? Is the issue, in fact, a non-issue?

Possibly the latter, one dares suggest. Perhaps we should relax about being so parochial.

After all, it’s kind of cool – is it not? – to be able to say how the best movie version of one of the key American novels of the 20th century, The Great Gatsby, was done by a bunch of Australians.

Footnote: The release of many hotly-anticipated films have been jacked around by Covid, and Peter Rabbit 2 is one of many that have been delayed for more than a year. The prayer is that many other similarly delayed films will hit our screens this year.