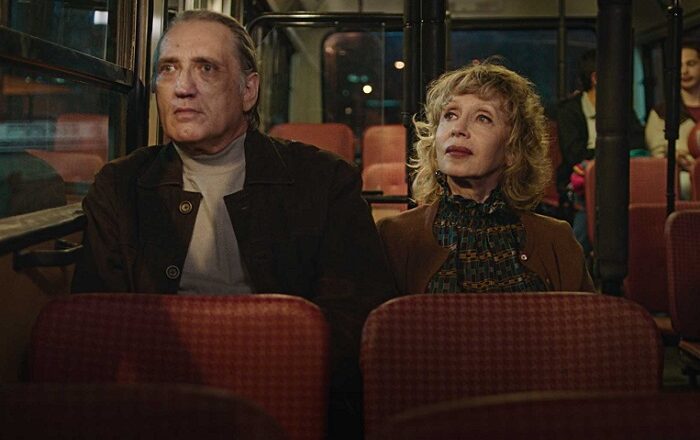 The golden opportunity to hit refresh on their lives comes as a mixed blessing for Victor and Raya Frankel (Vladimir Friedman and Mariya Belkina), two elderly Russian Jews who find that the collapse of the Soviet Union offers them the chance to leave the confines of the decrepit Motherland and relocate to a very sunny, very welcoming Israel.

It’s 1990, and tensions in the Middle East are high thanks to Iraq’s Saddam Hussein who has threatened to send over salvos of chemically loaded missiles at any moment. Everyone gets a gas mask and instructions on how best to take cover. It’s a tense time.

For Victor and Raya the warm welcome to their new homeland comes with a sizeable degree of cultural awkwardness. They specialized in dubbing Hollywood films into Russian, a skill set they discover is now next to useless.

They also gradually discover that the shift to their new home unveils some home truths about themselves and their marriage, which has long been based on a set of presumptions that might not be altogether true.

Desperate for work, Raya finds a modicum of success as a sex phone worker, a lucrative job that nonetheless comes with just enough prurience to keep it secret from Victor.

For his part, the laconic Victor stumbles into a lowly job for the council delivering flyers about what to do in case of a missile attack. He also chances upon a movie pirate who is keep to use his once-valuable services.

As the two feel their way into their new lives and sense the changes in each other, it becomes apparent that both are going through a mid-life crisis without knowing it.

The subtlety with which Friedman and Belkina register this on their weathered faces and through their body language is one of the film’s great delights.

Drawn from his own experiences, writer/director Evgeny Ruman composes a richly nuanced portrait of latter-life change, and how personal transformation can be incremental rather than sudden and involve realizing things that were already there.

If there is a key to the meaning of Golden Voices, it’s the redressing of neglect with respect, something Ruman suggests is something that can never come too late.