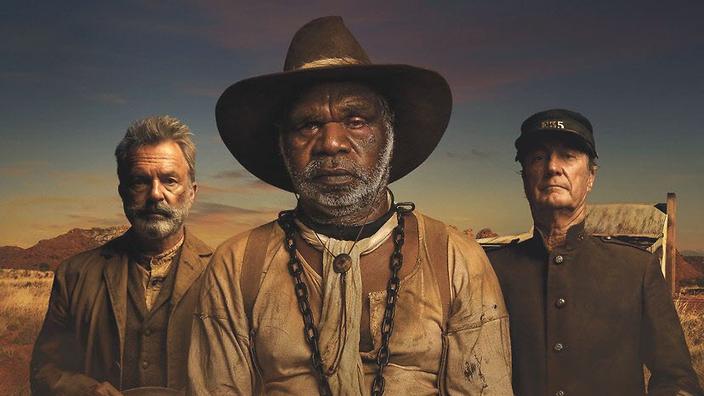 SWEET COUNTRY *** (113 minutes) MA
From esteemed indigenous director Warwick Thornton – whose 2009 breakthrough debut Samson & Delilah presented a brave, shattering contemporary view of aboriginal dispossession – comes a genre piece with a similar theme, though its eyes are fixed very much on the well-worn past.

Set in 1929, Sweet Country tells a big, simple story about murder, clashing cultures and the tension between racial prejudice and justice, all framed by the harsh, unforgiving, indifferent outback.

At the story’s centre is ageing blackfella Sam (Hamilton Morris), who is lent out as a farm hand by holy man Fred Smith (Sam Neill) to shady newcomer Harry March (the ever-versatile Ewen Leslie), who has just set up nearby.

Having never shaken off the shell shock he endured while fighting in the thick of World War I, March is a damaged man and a hard master, his untreated condition warping his sense of place, time and domain over the “black stock” who work the farms of white pastoralists.

A lethal incident sends Sam on the run with the local police (Bryan Brown) in pursuit, his hope being to show that the level head and even hand of modern justice will not be stayed by distance or local custom.

Thornton, who pulls double duty as a gifted cinematographer, proves himself something of a classicist here. Unlike Samson & Delilah, which was virtually all nuance, here he paints with big, broad strokes, showing the influence of John Ford and moving things at an unhurried pace.

Again proving his mastery of big-screen composition, Thornton wrings out the beauty and brutality of the landscape, evoking a semi-cultivated possession that is still wild enough to consume its inhabitants.

The measured pace serves Thornton’s incremental build-up of tension, with Thornton pulling off a climax that most won’t see coming,. There are stretches of the film where one wishes he would have engaged the elements of genre more energetically, as the central portion of the film does suffer from lethargy.

When presented with a new film from an indigenous filmmaker or with an indigenous theme it’s always tempting, in the name of cultural sensitivity, to automatically hail it as “important”, the presumption being that any contribution to the canon is worthwhile.

Such impulses are a case of good intentions misplaced, as well as being somewhat patronising. The high praise lathered upon Ivan Sen’s shoddy Goldstone is a perfect example of this syndrome.

Thus, Sweet Country is a good film, but it’s far from the important film Samson & Delilah proved to be. That superbly directed film broke barriers by offering a blistering, frank portrait of aimless indigenous teenagers in today’s Australia. It had an urgent message that needed cinematic voice. Thankfully, it connected.

With Sweet Country Thornton has given us a very well-made, engaging piece of genre entertainment, but any claims that it is an “important” film need to be heavily qualified by the fact that it joins a long, largely distinguished list of films addressing the historic hardships of aborigines, including Rabbit-Proof Fence, The Tracker, Black & White, The Proposition and Australia.

And let us take pause here to acknowledge the underrated Australian-American 1990 co-production Quigley Down Under. Starring Tom Selleck and directed by Aussie Simon Wincer (Phar Lap; The Lighthorsemen; The Cup; Lonesome Dove), it was the first major local film to feature scenes of aboriginal slaughter by white settlers.

Still, while Sweet Country might have qualified as a far more important film had it been made 20 years ago when the need for such films was far more acute, it is nonetheless a finely crafted film delving into dark aspects of our past that signals a film culture moving in the right direction.

I, TONYA **** (119 minutes) MA
The darkly funny account of the troubled life of champion ice skater Tonya Harding that is offered here combines a compelling sports story with ones about aspirational “white trash” – a racial epithet that needs to be regarded as equally dreadful as the “n” word – and American class prejudice.

In trying to establish the truth surrounding the notorious 1994 incident when Harding’s chief rival Nancy Kerrigan was bashed in her knees, we are regaled with face-to-camera interviews of people giving their versions of what really happened. These are supplemented by key moments when Robbie, in full flight as Harding, breaks frame to address the audience directly about the veracity of the events being depicted.

Those old enough to recall the story will find an instant fascination with the pressures Harding endured from her mother and her abusive husband (Sebastian Stan) while those new to it – including Robbie, who thought the script she was sent was fiction – will quickly fall under the thrall of the yarn’s bizarre intrigue.

Bubbling up through Harding’s tale is the prejudice imposed upon her because of her lowly class and her desire to rise above her lowly station. This gives the film a sharp, if unintended, topicality by identifying one form of 21st-century bigotry that attracts curiously little attention in today’s hyper-sensitive, rights-conscious, label-hungry environment. The film doesn’t scream out how discrimination against poor white people is textbook racism, but the point is there in those pungent scenes where she is being judged.

Robbie, best known until now for The Wolf of Wall Street, apparently trained hard for four months to skate convincingly in the film. However, it took an enormous effort by the film’s visual effects team to create those remarkable sequences in which Robbie appears to perform skating moves that only Harding could do.

This and other issues about the making and meaning of I, Tonya are covered in our interview with director/producer Craig Gillespie.

To view a trailer for the film, please click here:

DEN OF THIEVES *** (140 minutes) MA
In writer/director Christian Gudegast’s testosterone-driven heist-movie hamburger we get a gang of big-time bank robbers who are matched by a group of LA detectives lead by Gerard Butler who are almost psychopathically determined to nail them at their next gig.

As well as containing all the muscle cars, fights, shoot outs, chases, growling, arguing and heavying that you’d expect from an action film produced by Gerard Butler – it’s no surprise the director co-wrote Butler’s 2016 mega-hit London Has Fallen – the film has the added novelty of reversing the moral polarity of the good guys and the bad guys. While the crooks are meticulous and professional, the cops self-consciously act like a street gang, bending rules and threatening informants by happily telling them who the bad guys really are.

With barely a quiet moment anywhere and an above-average plot that actually makes sense, this lark is a highly entertaining guy movie. Whether females will enjoy it, however, will depend on their tolerance for a two hour-plus crime movie that has but a handful of women in it, and only as supporting characters.