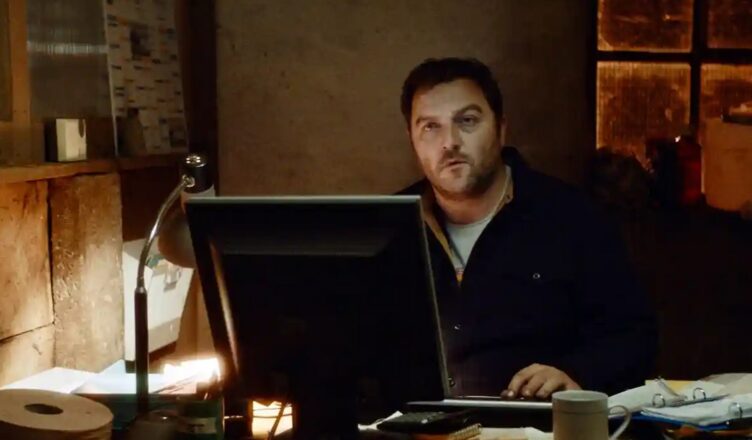 Reaching out: Denis Ménochet stars as a lonely farmer in in the fantastic mystery ‘Only the Animals’.

ONLY THE ANIMALS **** (118 minutes; subtitled) M
The disappearance of a wealthy woman in the snow-covered highlands of France triggers a near-brilliant mystery as we follow the interweaving stories of six people, some of whom are intimately and knowingly involved with the incident, others unwittingly so.

Showing a deep love of long takes and close-ups, Dominik Moll grabs you in the first few minutes with his slow-burn direction as the pieces of the puzzle gradually pull together for a genuinely startling payoff that includes many surprises and location shifts.

With the huge success of The Dry illustrating just how well-made a formula-driven mystery film can be, Only the Animals, which Moll adapted from the novel Seules les bêtes by Colin Nielgrabs, serves as an engrossing contrast where conventions are sidelined in favour of an intricately constructed, cliche-averse narrative.

Best known for his terrific performance as the dairy farmer in the opening sequence of Inglourious Basterds, Denis Ménochet again plays a farmer, Michel, whose troubled marriage prompts him to seek relief in the darker corners of the internet.

He heads a top cast including Damien Bonnard (Dunkirk), veteran Valeria Bruni Tedeschi and Guy Roger N’Drin as Armand, a teen who inhabits the same dark corner of the web as Michel.

Steeped in menacing atmosphere and framed by an ever-tightening tension, Only the Animals proves to be one pearler of a whodunit.

PENGUIN BLOOM ***1/2 (95 minutes) PG
The full force a paralysing accident has on a young family is front-and-centre for almost every frame of Penguin Bloom, a raw, touching, heart string-plucking Australian drama, based on a true story.

She has a lovely, chatty mother Jan (Jacki Weaver), who is also happy and healthy, as well as close friends who cannot be faulted for either their happiness or their health.

Enjoying their beach-loving lifestyle on the coast, cruel happenstance cuts into the lives of the Blooms when Sam falls during a holiday in Thailand and breaks her spine, confining her to a wheel chair.

It’s not just her spine that gets injured. Her spirit, sense of self and will to live come under crushing pressure by her paralysis. Angry and alienated she feels cheated, resentful and even rejected, though much of her alienation seems self-imposed by her bitter mindset and resentful attitude.

The only thing that seems to offer her any respite is the presence of Penguin Bloom, the family’s pet magpie who subtly takes on a spiritual symbolism as Sam battles with life, her condition exacerbated by flashbacks of how happy and healthy she once was.

The last things anyone wants to endure in any film dealing with disability is sentimentality, mawkishness or melodrama.

Emotionally, there are some broad strokes in the film, especially with Sam’s epic journey of readjustment, yet it all rings true.

Watts is so good here she is sometimes painful to watch, as well as being a bit of a pain for her family to put up with. It dawns on Sam gradually that much of the stress in their lives is actually under her control, if only she could relent and unshackle the guilt that now courses through her home.

At the heart of the portrayal is how Sam confuses acceptance with resignation, a mistake that keeps her from feeling the love around her. Watts captures that agonizing state of emotional limbo with stark authenticity.

Performances from the children are natural and believable, avoiding that trap we often see when child actors are directed to behave like miniature adults.

Particularly strong is Andrew Lincoln as Sam’s supportive husband, tasked with keeping his family anchored during the emotional storms brought on by Sam’s temperament.

Of all the performances in the film, however, special kudos must be dealt to Penguin Bloom, who prances about the house doing dramatically important bits of business like a feathered pro. The bird was, in fact, played by a flock of trained birds along with some deft digital assist that helped render the turn flawless.

Side note: We’ve just endured the “controversy” over Sia’s Music, which committed the newly hatched Woke School sin of casting a non-autistic actress as an autistic character.

There was a great pseudo-moralistic gnashing of teeth from some quarters over that – so, ladies and gents, where be the bellicose condemnation of Naomi Watts? She is not paralysed, yet here she is playing a paralysed character. For shame!

Yet it grinds against common sense to pursue the “like for like” casting mentality that dictates how a character with a disability or a condition must be played by a person who has the same. It’s crazy.

A big question that should be answered is: who thought up this nonsense in the first place?

The bigger question, however, is the one that never gets asked or answered, and that is: what is the restriction supposed to achieve?

The only thing that readily comes to mind is cancelled projects and the eventual evaporation of characters with disabilities from film and TV.

Now, what kind of accomplishment would that be?

SHADOW IN THE CLOUD *** (83 minutes) MA
The visual effects are great and Chloë Grace Moretz is, well, better than she was in Suspiria in Shadow in the Cloud, a gloriously preposterous, high-flying horror lark that borrows heavily from George Miller’s gremlin-vs-airliner segment from 1983’s Twilight Zone – The Movie.

As WW2 British Flight Officer Maude Garrett (nice job on the accent here) Chloe talks her way onto a bomber about to take off from a New Zealand airbase on a dark and forbidding night and head into the South Pacific.

Stuck in the ball turret on the bottom of the American bomber, our plucky heroine has to deal with a chauvinistic crew, a secret package, Japanese fighters and an otherworldly critter intent on tearing the plane apart from the inside.

Nimbly directed by Roseanne Liang, the film is a self-consciously outlandish adventure, including a memorable sequence where Maude – what ever happened to that great name? – breaches the safety of her bubble to contend with the plane’s gremlin.

The masterly visual effects certainly make it look pretty real, but as you watch Maude climb across the underside of a bomber flying at hundreds of miles an hour in freezing temperatures at night while being machine-gunned by Japanese fighters you can’t help but think: “Nah, this probably couldn’t happen in real life.”

Shadow in the Cloud is a load of ludicrous fun – and quick. Remember, that running time includes about 10 minutes of end credits.

DAWN RAID ***1/2 (98 minutes) M
The funny, fascinating, frenetic story of the phenomenally popular Kiwi record label Dawn Raid serves as a great cautionary tale about how not to handle success. Replete with archival video footage and some very frank interviews with founders Andy Murnane and Brotha D about what went wrong, the film, directed by Oscar Kightley, is essentially a colourful business documentary about the importance of keeping a close eye on how much money you’re making and where it’s going. In one hilarious moment one of the participants dissects the moment he realized the difference between turnover and profit. Terrific stuff.