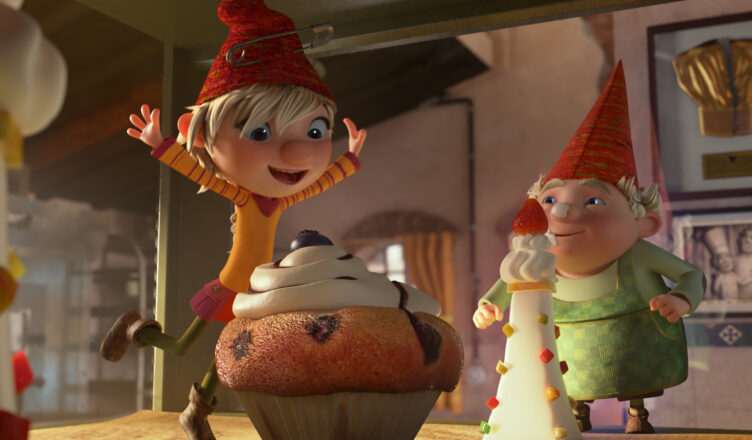 Cupcake-cute: Gnomes defy the rules to help humans in ‘The Elfkins: Baking a Difference’.

THE ELFKINS: BAKING A DIFFERENCE *** (78 minutes) G
A trio of gnomes emerge from their subterranean village and help a struggling baker get back on his feet in a very cute, well-baked formulaic kids’ film from Germany that is hard not to like.

Elfie is the standard animation-movie individualist – thank Pixar for that archetype – who wants to break free of the cloistered community that promotes prejudice against the humans who dwell above them.

Looking to expand her horizons and learn new life skills she makes for the surface accompanied by her spherical friend Kipp and the cynical, conformist Buck, whose plan to stop them backfired.

They chance upon Theo, a debt-laden baker. He’s at war with his brother Bruno who has built a baking empire across the road. They used to be close, of course, but jealousy and money tore them apart.

It’s a pleasantly predictable lark that dutifully follows the strict dictates of the kid’s animation genre by using high-key adventure to promote positive themes such as reconciliation and understanding. The Elfkins learn some life lessons about co-operation, community spirit and how likeable humans and their dogs can actually be.

This might be a case of over-thinking things, but the story’s take on Elfie’s journey is especially interesting to grown-ups looking for a subtext.

While her world-widening experience comes from defying the rules of her community, it’s their help she must call upon to complete her quest and give her adventure meaning.

Hmm. There’s some pithy message there, surely, perhaps about how going your own way doesn’t mean abandoning those you left behind.

Directed by Ute von Münchow-Pohl, the animation is good, if unexceptional, and the breezy pace – look at that no-nonsense running time – has some respectful Toy Story touches.