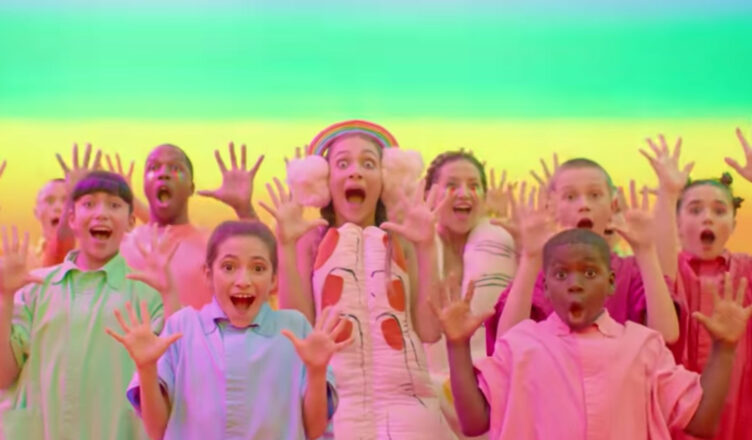 MUSIC **1/2 (107 minutes) M
Noted songstress Sia stumbles about with her semi-impressive directorial debut, a musical drama about autistic girl Music (Maddie Ziegler) who comes under the care of her drink-and-drug frazzled half-sister Zu (Kate Hudson) when their grandmother dies.

The film toggles between docu-drama styled scenes as Zu attempts dealing with the demands of looking after Music and brightly coloured musical fantasy numbers in which Music prances about with other members of the cast and a team of fluorescently costumed dancers.

The segues into these fantasy scenes are snappy but while the splashy sets, slick choreography and smooth camerawork make for some nice eye candy, frankly, these musical sidebars are nothing you wouldn’t see on TV.

They might look brash but there’s nothing all that fresh about them. They certainly pale against Sia’s billion-viewed music videos for Chandelier and Elastic Heart, in which Ziegler danced her way to global fame after Sia discovered her on the reality series Dance Moms.

As for the dramatic side of the tale, things skip and slide all over the place.

Small, nicely observed moments of tenderness and connection between Zu, Music and their extraordinarily friendly and supportive neighbours Ebo (Leslie Odom Jr) and George (Hector Elizondo) – they all implausibly live on the same floor – are offset by many clumsy attempts to introduce plot lines, most of which are left unresolved by film’s end.

The film also propagates a lazy cliche, last seen in The Queen’s Gambit, that really needs to end.

Kate Hudson puts in one of the better performances of her career as the troubled Zu – but how is it that she is so beautiful and in such great physical shape if she’s supposed to be having all these problems with drugs and alcohol and life in general?

There’s no accounting in the film for the hours per day she’d need to exercise to maintain such a toned physique, and how is it that excessive drinking has somehow left her face unblemished? Hudson does fine work, but she simply looks too healthy given the film’s striving for realism in its non-musical scenes.

Footnote: A silly tea cup-sized “controversy” has swirled around the film – and it needs to be soundly countered.

Long before Music was released Sia came under fire from the online mob for casting Ziegler, who does not have autism, in the role of a person who does.

The mob maintains that in movies like must play like, especially when it comes to people struggling with an affliction.

So the fact that Maddie Ziegler is not actually autistic has raised cackles in some quarters. Sia did briefly interact with the online mob before wisely withdrawing and saying that it was a waste of time to try and engage her newly-hatched army of online haters.

Quite rightly, too. Sia has nothing to apologize for in that regard.

The problem with the character of Music is not that Sia cast a person without autism to play a person with autism. It’s that Sia did not elicit a better, more rounded performance from Ziegler, or cast a better actress in the role.

That’s not to dismiss the performance out-of-hand, which would be unfair. There are moments when it works, particularly in the film’s more subdued beats.

Clearly much effort has been put into the portrayal but too often it’s the effort that we see rather than the character, thus resulting in a strained performance occupying the heart of the piece.

Incidentally, no rationale has ever been presented to clarify what the “like-for-like” dictum is supposed to achieve. A long line of Oscar winners demonstrate that an actor doesn’t have to have an affliction to convincingly play a character with that affliction.

If “like-for-like” was the rule then the cinematic portrayal of people with disabilities – or any sort of issue be it drugs, alcohol or mental illness – would very quickly drop off to nothing.