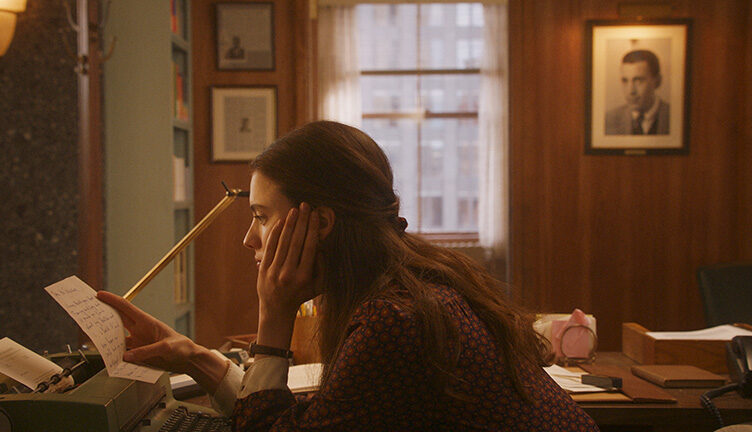 Author, author: Margaret Qualley plays an office clerk with a big job in ‘My Salinger Year’.

MY SALINGER YEAR **1/2 (101 minutes) M
The gleaming presence of up-and-comer Margaret Qualley bolsters an otherwise mildly entertaining reheating of The Devil Wears Prada story template, only here built around the enduring mystique of J.D. Salinger, the famously hermitic author of The Catcher in the Rye, a novel that has inspired generations of readers since it was first published in 1951.

We meet Joanna (Qualley) as a supposedly dream-driven lass from California who, in 1995, leaves it all to make it big in New York as a writer. The first big step in her scheme is a gig as a lowly clerk working for the literary agency that represents Salinger.

Running the place with a stern demeanour and an aversion to the emerging digital technology is Margaret (Sigourney Weaver) who gives Joanna the onerous but envied job of going through all of Salinger’s fan mail.

She must read them all, checking closely for nut cases the police might be interested in – the book was found on John Lennon’s assassin Mark David Chapman – and typing out standard responses to fans designed to douse their hopes of having any contact with Salinger.

Though instructed never to get personal with these boiler plate letters, Joanna can’t help herself, a transgression that results in the film’s most notable incident.

Written and rather flatly directed by Philippe Falardeau (who gave us the wonderful Monsieur Lazhar) from the memoir by Joanna Rakoff, the film is no great shakes either as an insight into Salinger or as an aspirational “making it in the big city” story.

The nature of Salinger’s fandom manages some traction, but the film’s main draw is Qualley, who holds her own against Weaver, whose verbal punches remind us of, but can’t really match, Meryl Streep’s tongue lashings in Prada.

So memorable as Pussycat in Once Upon a Time in Hollywood, Qualley manages to give some animation to Joanna, even though the character is curiously muted.

For a wannabe writer Joanna is surprisingly indolent and doesn’t seem to have her heart in her dream. Socially she’s immersed in the New York literary scene but is oddly disengaged; at work she’s in regular phone contact with a legendary writer who even offers her advice, yet somehow she can’t be bothered reading The Catcher in the Rye.

Still, Qualley, daughter of Andie McDowell, keeps Joanna from coming across as a drone, with her innocent face and Disney-princess eyes imbuing Joanna with an endearing naivety.