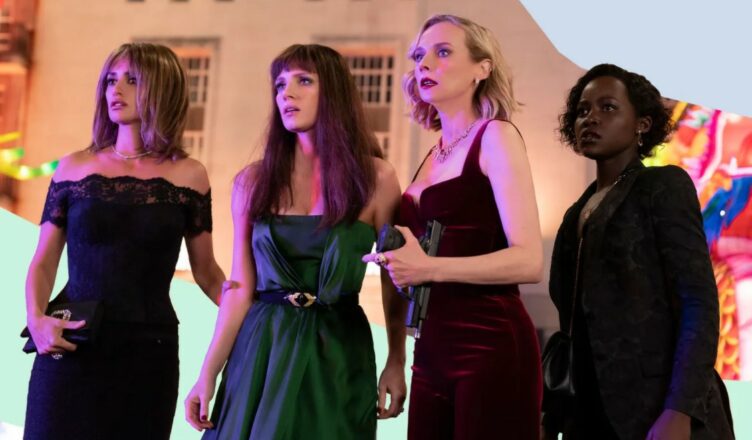 Watch out world: Four-fifths of the glamourous lead cast in action film ‘The 355’.

THE 355 **1/2 (122 MINUTES) M
A team of five women from five countries with five different personal agendas are brought together by crazy circumstance to show off a gorgeous array of designer fashions while saving the world, killing lots of bad guys in the process and taking care of one particularly nasty piece of work.

A super-hacking device has been created that can take control of any computer system in the world, allowing whomever has control of it to shut down cities, crash planes, disrupt television broadcasts and so forth.

First in the hunt for the cyber gizmo is CIA hotshot Mace Browne (Jessica Chastain). She realizes she needs help, so recruits her estranged MI6 pal Khadijah Adiyeme (Lupita Nyong’o).

In competition for possession of the family chocolate-sized external drive is maverick German agent Marie Schmidt (Diane Kruger, forever Bridget von Hammersmarkfrom Inglourious Basterdsnot as a symbolic representative of all men. Because that would be, you know, sexist.

On top of being extremely easy on the eye, the all-female headliners of The 355 play off each other nicely, even when they’re gunning for each other.

It’d be going too far to call it chemistry, but they certainly work much better than the all-femme ensembles we saw stumble through Charlie’s Angels (the new one, not the fab films with Lucy Liu, Drew Barrymore and Cameron Diaz), Ghostbusters and Ocean’s 8.

There are lots of clunky editing and bland blam-blam shoot outs that feature yet more of those movie henchmen who can never hit anything, even at close range with an automatic weapon. Of course, each time one of our girls shoot, they hit.

One fight scene of particular note involves a beautifully dressed Jessica Chastain squaring off with an anonymous bad guy in a stoush that goes on for so long, we actually cut away to other scenes, then cut back to see them still at it.

Remember that brilliant scene in Talladega Nights (2006) when that race car prang went on so long there was time to insert a beer commercial? Same deal here, only it’s not played for laughs. Not intentional ones, anyway.

Pay even a modicum of attention to the sub-Bond plot and you’ll find holes all over the shop. Most glaring is that the world-threatening gizmo they’re after is the only one.

Now, come on. The number one rule of digital technology is to always make a copy. Everybody knows that.

As John Hurt taught us in Contact (1997), even if your gizmo cost half a trillion dollars to make, you always make a back-up copy and stash it where nobody can find it. Just in case.

It’s also a tad disappointing why the meaning behind the title is treated as an afterthought. Why lazily slap it on at the end? Why not have a straight, stand-alone pre-credit sequence about the legacy and legend of the real “355” with historical illustrations, and maybe some animation? (Thinking out loud here of how Orson Welles began his brilliantly realized version of Franz Kafka’s The Trial with such a pre-credit segment.)

Still, the pulchritudinous cast help this OK popcorn pusher hang together well enough. It’s no classic, but at least it’s no Ocean’s 8.

Footnote With the passing of the legendary Sidney Poitier, a scan of his formidable filmography shows a terrific film he made in 1992 with Robert Redford called Sneakers.

Made long before the internet was a thing, the plot involved the acquisition of a lethal device very much like the one featured here.

Directed by Phil Alden Robinson (Field of Dreams; The Sum of All Fears) the movie also starred Dan Aykroyd, David Strathairn, Ben Kingsley and, in one of his last performances, River Phoenix.

It’s a ripping yarn, was a big hit and had ideas well ahead of its time. A prescient moment foreshadows the 9/11 terrorist attacks, a scene judiciously edited from TV screenings of Sneakers post-9/11. Well worth checking out.