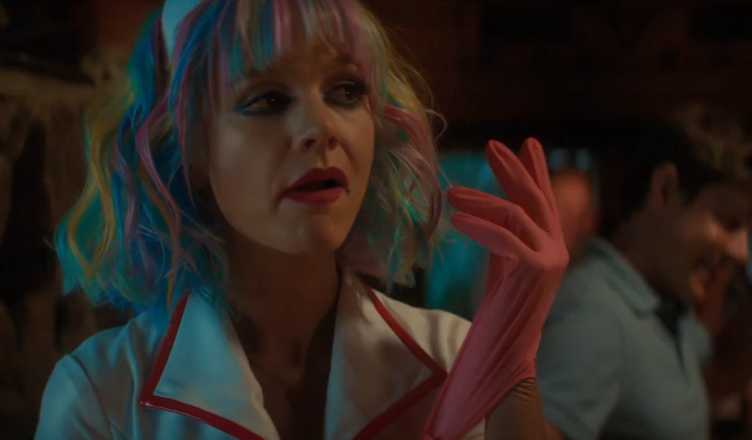 PROMISING YOUNG WOMAN *** (113 minutes) MA
Taking its cue from the B-grade drive-in films of the 1970s, Promising Young Woman is a very well-crafted, satisfying exploitation film that melds a comprehensive menu of #metoo bullet points into a consistently engaging revenge-thriller.

The basic premise is pure cinematic pulp: a young woman Cassie (Carey Mulligan) engages in a personalized attack on duplicitous men who try taking advantage of her when she pretends to be drunk at local clubs and pick-up joints.

An impressive debut feature from writer/director Emerald Fennell (a noted English actress), the film maintains quite a grip; the tone alternates between fierce and friendly as Cassie strives for justice over a sexual assault case that derailed her life.

So pungent are themes of bad men, abuse of power and the thirst for vengeance you’d swear Promising Young Woman was the type of film Lisbeth Salander, from Girl with the Dragon Tattoo, would make, or watch on a loop.

Front-loaded with Catholic symbolism – Alfred Molina appears as the very embodiment of guilt – the film is very enjoyable for the genre film that it is.

Though it is built upon hot-button topics of the day regarding sexual harassment, sexual assault, male privilege and so forth, Promising Young Woman should not to be mistaken for some searing, serious post-Weinstein drama about #metoo issues.

For something like that go to The Assistant or Bombshell, which stars Margot Robbie who co-founded LuckyChap Entertainment, the production company that made this film.

Think of Promising Young Woman more as I Spit on Your Grave refracted through a #metoo lens. And that’s a high compliment. Few things are more gratifying in cinema than the sight of women paying out on the men that wronged them. More power to them.

RAMS *** (119 minutes) PG
The fractured fraternal bond that has kept sheep farmers Colin (Sam Neill) and Les (Michael Caton) on non-speaking terms for 40 years comes under increased stress in the face of a government decision to destroy their flocks over fear of disease.

Living within a few metres of each other on their family’s century-old property, the pair have grown into bitter rivals, with Les often winning the local sheep competition.

When one prize sheep is found with a highly communicable disease, officials declare the area a hazard and order the liquidation of all sheep in the valley, meaning the extinction of their family’s special breed.

Colin and Les are then forced to consider the possibility of putting aside their very large hatchets and working together like, well, brothers.

A fine remake of the 2015 Icelandic film by Grímur Hákonarson, director Jeremy Sims maintains an assured balance between sporadic spots of comedy and the drama underpinning the threat to the livelihood of these men.

Caton gives Les a wonderfully growled and aggressive presence against Neill’s more personable, if cowardly Colin, who has a deep fear of confrontation with his brother, especially when Les is bearing a shot gun.

Also starring noted British actress Miranda Richardson as Kat the local vet, the film’s most admirable performance comes from Leon Ford in the thankless role of De Vries, the government man whose job it is to administer the cull and compensate the devastated farmers.

In the face of CV-19 the film has proved quite the hit at the constricted local box office, with an impressive take of more than $3 million.

That’s another feather in the cap of director Jeremy Sims, whose two previous films Last Cab to Darwin and Beneath Hill 60 also found sizeable audiences.

By the way, a point of order: given how Rams is an Australian remake of a film from Iceland, why hasn’t it been viciously attacked for “cultural appropriation”?

For those who have never encountered that term, half your luck.

For the fortunately uninitiated, “cultural appropriation” refers to the allegedly dastardly practice of being inspired by another culture and incorporating it into art.

Yet another stupid example of wokespeak, the term is intended as morally didactic rhetoric but is, in actuality, complete hooey. The term might run hot during an idiotic debate on TV or online, but it quickly runs out of puff because it is logically nonsensical.

Cultures don’t exist in isolation; they typically blend and reflect many cultures in all aspects of life including art. There’s no way to stop people being inspired by other cultures, but if there was art and culture would die that day.

HOW TO BE A GOOD WIFE **1/2 (109 minutes; subtitled) M
The evergreen Juliette Binoche adds her spark to an otherwise tepid French period comedy about a finishing school that teaches young women how best to serve their households and their husbands once they have achieved the life’s goal of matrimony.

Set in the turbulent late-1960s when the spirit of change put all traditional values on notice, the attractively located school’s latest intake of attractively appointed pupils can’t help but question the lifestyle they are being conditioned to accept as they become ever more aware of the freedom they are expected to sacrifice for family and France.

Brightly coloured, it’s a passable, feather-lite nostalgia trip with some broad comic touches as matron Paulette (Binoche) has to take over the school when her husband passes on. If only the characters weren’t made to spout dialogue that sounds as though they are mouthing the modern-day thoughts of screenwriters Séverine Werba & Martin Provost (the director).

We get that a lot with period films, where the attention given to fitting characters into costumes of a given period is rarely matched with words suited to the times.

And if the film is intended as a celebration of the rise of modern feminism, Provost really should have worked harder to bless the film with a much better finale than the soft-headed cop-out he’s opted for here.