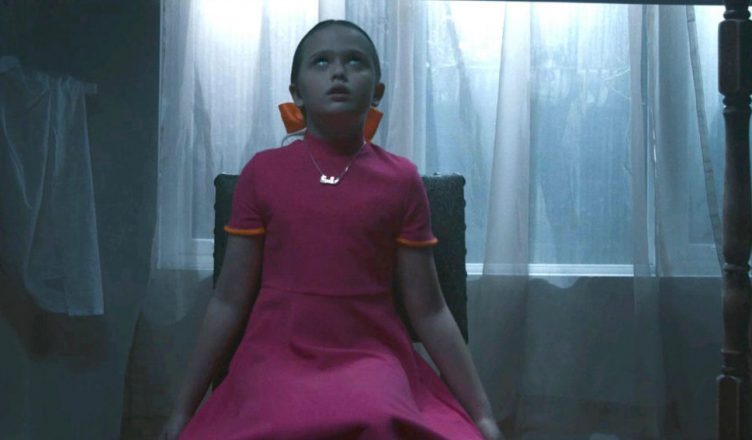 SURROGATE *** (95 minutes) M
One of the beloved conventions of the horror genre that never seems to grow old is the unnerving presence of children – either in trouble, causing trouble or caught somewhere in between.

It’s clear from Surrogate that writer/director David Willing and his co-scribe Beth King, know this well enough to grace their effective, proficient, tense low-budget spookfest with not one but three kids, none of whom you’d want knocking on the door at Halloween.

The well-mounted, surprise-soaked story drops us into the tortured life of Natalie (a very convincing Kestie Morassi, from Wolf Creek), a troubled single mother and nurse who suffers from a phantom pregnancy that seems all too real.

But it’s not just the inside of her body that’s causing grief.

Her quaint suburban home is soon host to the ghost of a young girl (Ellie Tevelis). She likes paying visits to Natalie’s daughter Rose (Taysha Farrugia), who is understandably terrified.

Desperate for help they turn to medium Ava Akard (Ellie Stewart), who happens to be another little girl. Dressed in a manner more befitting a Pollyanna remake than a chilling horror movie, she takes a seat between two large mirrors to speak with the spirit world on their behalf.

To wit, a friendly note to the squeamish: brace yourselves for a particularly confronting scene that features blood. Lots of blood.

All done in the best possible taste, of course.

It’s also worth noting how good it is to see Surrogate so soon after Sissy, another accomplished Aussie horror film. Seems horror is something young Australian filmmakers do very well.

Having already been exhaustively interviewed about the film, director David Willing was nonetheless willing to submit himself one more time, though this interview took place over a Yarraville coffee rather than Zoom.

Forgive the ambient background audio, but David is perfectly intelligible.

Surrogate is available in Australia on TubiTV.com and in the US & UK on Amazon Prime.

David Willing Interview Index
00:00 Setting the table; elevator pitch;
01:00 More thematic description;
02:10 Life of the film so far;
03:40 Streaming on Amazon Prime in US & UK and (also in Australia) TubiTV .com;
04:00 How did they land US Prime?;
04:38 Why are Australians so good at horror?;
05:34 Australia is a dangerous land; Utah camping anecdote;
06:05 Did you make a horror film because it was more likely to get made?
07:00 Casting and working with children;
08:33 The irony that they’re too young to see the film;
09:50 Using counter-intuitive colour scheme;
11:08 Child welfare officer as villain;
12:00 Digital vs film; a cost issue;
13:00 Discipline of working on a small budget;
14:00 Practical vs digital effects; “If I had the budget to do digital I still would have done practical on this film”;
18:00 The fine art of cutting a trailer that doesn’t tip the story;
19:06 Hitchcock influence.