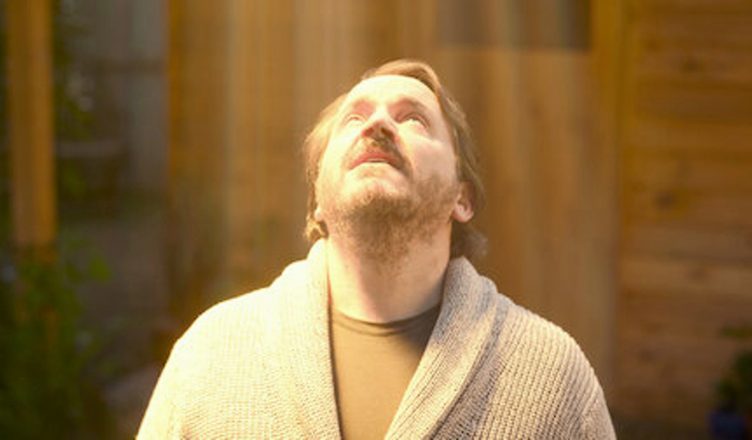 GOD’S FAVOURITE IDIOT **1/2 (205 minutes; 8 episodes) M
full season review
Some people can’t stand it, but if you respond the semi-improvised, blurt-laden comedy stylings of Melissa McCarthy and her creative partner/husband Ben Falcone you might get a kick out of their feather-lite, foul-mouthed, faith-based lark about a regular shmoe who is tasked by God to help prevent the Apocalypse, even as the four Horsemen ride through the local grocery store.

This light-emitting affliction is due to an intervention into his sad little life by The Almighty (Magda Szubanski) and her angel messenger Chamuel (Yanic Truesdale) to get people thinking more about God and how all religions are batting for the same team.

Into the fray enters a sexy manifestation of Satan (Leslie Bibb), who is engaged in a celestial punch-on with God which she is winning.

Set mostly in their office and Clark’s home, God’s Favourite Idiot is a pleasant low-flying fantasy jaunt fuelled by lengthly and often plot-irrelevant verbal exchanges between Clark’s nattering work colleagues about his situation and how best to help him out as they realize their next all-staff message might include a bullet point about how to dress appropriately for the End of Days.

Delivered in easy-to-digest half-hour eps, God’s Favourite Idiot is an easy, breezy watch, it’s unforced pro-God story floating on a host of congenially goofball performances from Usman Ally, Ana Scotney, Chris Sandiford and especially Steve Mallory as “Frisbee”, the awkward office manager who sheepishly reminds the staff that they actuallu have work to do.

McCarthy’s signature snark and Falcone’s love of dorky dialogue set the tone for the comedy. There’s lots of presumably improvised moments peppered throughout that, admittedly, can sometimes grow a tad tiresome, especially when the jokes don’t quite land. There is a lot of blurting, so if you’re not already a fan of McCarthy or of her particular brand of big-mouth comedy, God’s Favourite Idiot won’t win you over.

There are eight episodes in this run, with another eight to drop shortly to show us how the Apocalypse goes and whether it’s possible for McCarthy’s wardrobe to get any more florid, or for her gags to contain even more cuss words.

HALLELUJAH: LEONARD COHEN, A JOURNEY, A SONG **1/2 (118 minutes) M
Without wishing to suggest for a nano-moment that the late legendary poet/singer/songwriter Leonard Cohen (died 2016) is overrated, there does a come a point in the lives of those who are not hardcore, diehard, life-long fans when they say “I really don’t need to see another Leonard Cohen documentary”.

Based on Alan Light’s 2012 book The Holy or the Broken, directors Dan Geller and Dayna Goldfine have done about as thorough a job as you could imagine with their exhaustive, point-by-point slow-walk through Cohen’s life and work, starting broad then slowly honing in on his most famous song Hallelujah, best-known via all the cover versions that have been recorded (John Cale, kd lang, Jeff Buckley, etc) and its inclusion on the Shrek soundtrack.

There’s not an achievement, failure, turning point or talking point about Cohen’s life that isn’t accompanied by an interview snippet or bit of archival footage, the wealth of which reminds us that Cohen’s career must be one of the most comprehensively covered in modern music history. This should come as no surprise; the guy clearly loved being interviewed.

Yet while he’s impossible not to like and admire, the plodding pace and conventional chronological structure of the bio renders the telling somewhat dry, especially for those who don’t consider Cohen to be the sage this film clearly makes him out to be.

It’s lovingly made, no question, but strictly for fans.

HUSTLE *** (117 minutes) M
In his on-going quest to strengthen his standing as a dramatic actor, Adam Sandler puts in some sterling work as Stanley Sugerman, a basketball scout for the Philadelphia 76ers whose frustrated coaching ambitions force him to go solo with player Bo Cruz (Juancho Hernangómez), who he discovered in Spain.

With all his eggs in one basket (echoes of Jerry Maguire here) Sugerman’s battle to get his charge signed up becomes increasingly desperate in a solid, engaging sports drama reminiscent of the films by Ron Shelton (Blue Chips; White Men Can’t Jump).

Best known for his comic leads in a string of critically reviled, commercially successful films, Sandler first displayed his dramatic chops in Punch Drunk Love (2002), then Spanglish (2004), Reign Over Me (2007) and, most recently, in Uncut Gems (2019).

In Hustle he lets off a few zingers though director Jeremiah Zagar mostly keeps things on the straight-and-narrow as Sugerman fights to keep hold of his career as it verges towards the precipice.

Sandler also holds the distinction of being one of the first Hollywood types to fully harness the power and reach of the stream, his Netflix films Murder Mystery, The Ridiculous 6, Sandy Wexler and Uncut Gems all hitting big.

Even his dedicated detractors have to bow to the guy’s business nous and his uncanny ability to read the room.

THE MAN FROM TORONTO **1/2 110 minutes M
In a typically harried performance, Kevin Hart plays a failed gym instructor who, while trying to treat his successful wife at a luxurious retreat, is mistaken for a notorious hitman/torturer (Woody Harrelson) with whom he is forced to work in order to prevent an assassination.

As far as disposable, forgettable action comedy larks go it’s got enough movement and well-mounted fireworks to justify its generous running time – get back to a 90-minute standard, Hollywood – though there are some moments of allegedly “comic” violence that are surprisingly unsavory.

Most awkward is the killer’s attempt to become a kinder, gentler person via the influence of his everyman partner. It’s clumsy and furthers the suspicion that a lot of the films made for the voraciously content-hungry stream might be going into production a draft or two too soon.

Still, the action is directed with workmanlike proficiency by Australian Patrick Hughes, who made Red Hill (2010), The Expendables 3 (2014), The Hitman’s Bodyguard (2017) and Hitman’s Wife’s Bodyguard (2021).