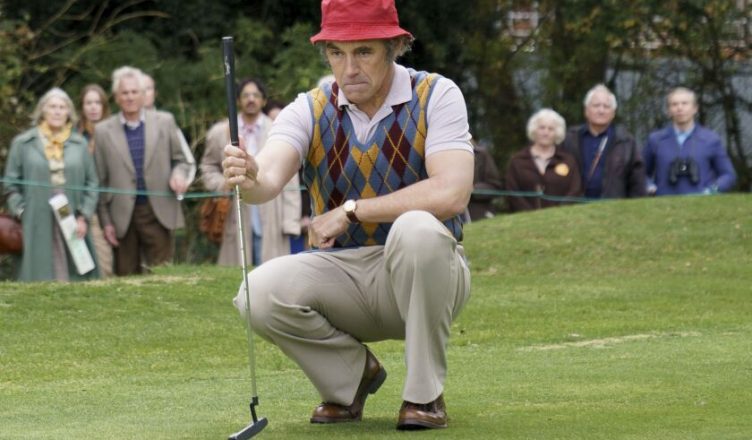 His shot: Mark Rylance as amateur golf nut Maurice Flitcroft in ‘The Phantom of the Open’.

THE PHANTOM OF THE OPEN ***1/2 (106 minutes) M
The Brits have long loved celebrating underdogs, eccentrics and losers on screen, provided, of course, that they radiate that most quintessential of all British qualities – pluck.

Projecting that dauntless spirit of dogged perseverance in the face of all odds, doubters and naysayers is Mauruice Flitcroft (Mark Rylance), the unassuming, fact-based hero of the uplifting, deeply enjoyable golf comedy-drama The Phantom of the Open.

Indeed, Flitcroft and his adventures into the august, class-conscious golfing world of the 1970s so beautifully crystallize the rule-bending underside of the prim & proper British archetype it’s a wonder his remarkable story has taken so long to be translated into a film.

With his long-standing job as a crane operator on the verge of vapourizing, the ageing Maurice Flitcroft (superbly played by Mark Rylance) decides to follow the “Follow Your Dream” advice he wholesomely gives his three sons, two of whom are competitive disco dancers, the other a young executive in the firm Flitcroft is being scrapped by.

With a head full of quiet determination he audaciously declares himself a professional, entering the 1976 Open Championship tournament where he becomes a media magnet, shooting a record-low score that readily establishes his celebrity as the world’s worst golfer.

Working from a screenplay by Simon Farnaby (based on The Phantom of the Open: Maurice Flitcroft, The World’s Worst Golfer which he co-wrote with Scott Murray), Craig Roberts directs with a strong sense of affection for Flitcroft and his media-friendly exploits, yet dials up the yarn’s dramatic underside as Maurice, quickly enveloped by clownish fame, begins questioning how hollow his dream-chasing philosophy might actually be.

Rylance, easily one of the best actors around, is pitch perfect as Flitcroft, playing the comedy softly and the heavier moments with just the right amount of gravitas.

In strong support are the ever-versatile Sally Hawkins as wife Jean, with Jake Davies as the corporate son and Christian & Jonah Lees playing the disco-loving twins who take their dad’s advice to heart.

Still, special mention need be made of the redoubtable Rhys Ifans who is pure gold as the snobbish club official, the precise counter to Rylance’s lovable eccentric. Yes, it’s a conventional comic contrivance, but it works.

Standing as a worthy companion piece to Eddie the Eagle (the 2015 film based on real-life ski jumper Michael Edwards, played by Taron Egerton), The Phantom of the Open certainly continues that rich tradition of sports films promoting the life lesson of how winning means more than coming first.

Warm, uplifting and grounded by sensible messaging about being aware of your limitations while pursuing your dreams, The Phantom of the Open is set to be one of the most fulfilling feel-good films of the year.