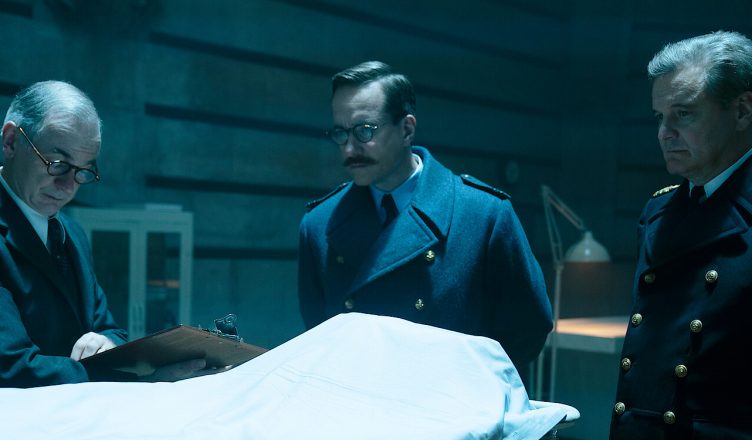 OPERATION MINCEMEAT ***1/2 (128 minutes) M
A fine, sturdy reprise of the old-fashioned British Stiff Upper Lip war drama, Operation Mincemeat recounts in engrossing detail the factual so-crazy-it-might-just-work scheme in 1943 by High Command to trick the Germans into believing the Allies were going to begin the taking of Europe through Greece rather than Sicily.

Lead by intelligence officers Ewen Montagu and Charles Cholmondeley (played respectively by Colin Firth and Matthew Macfadyen, both perfectly cast), the ruse involved a borderline-ludicrous plan to plant false documents on a corpse for the Germans to find.

Dripping with period detail – is it possible to make a bad-looking period film in the UK? – it’s a ripping yarn full of intrigue and exacting detail as the gents, with the help of secretary Jean Leslie (Kelly Macdonald), work hard to create a credible identity to go with the corpse.

The task involves planting personal touches to the corpse, including a love life, the development of which rouses some romantic interplay between Leslie and the two officers, one of whom has a huge, barely suppressed crush on her.

The perilous nature of the plan, which could have gone wrong at a hundred turns, is duly highlighted by director John Madden (Mrs Brown; Shakespeare in Love; Captain Corelli’s Mandolin; The Best Exotic Marigold Hotels), who manages to inject a tense sense of adventure in the proceedings.

It’s a tough trick for a director to pull off, to inject tension into a story the outcome of which is a matter of historical record. Ron Howard did it so well in Apollo 13 and Madden rises to the task here as the plan constantly appears on the verge of exposure.

Is Operation Mincemeat an old-style flagwaver? Sure it is, and one well done, as was Dunkirk, 1917, The Imitation Game and The Darkest Hour, and so forth.

Just like the “flagwaver” war movies of yore, these recent films don’t celebrate war or minimize the cost of war.

Rather, they herald the values of fortitude and courage that help a nation get through war, pulling focus how the big operational picture always boils down to the experiences and conduct of individual players.

FOOTNOTE: The story of Operation Mincemenat was told in the very good 1956 film The Man Who Never Was, directed by Ronald Neame starring Clifton Webb, based on the book by Lieutenant Commander Ewen Montagu.

FATHER STU *** (124 minutes) M
Hard-edged and potty-mouthed with a chip on his shoulder the size of an SUV, Mark Wahlberg puts in sturdy work portraying Stuart Long, a real-life lout who turned out to be a prime case study in Catholic conversion after a near-fatal accident helps him see the light.

Be as cynical as you like coming in to this faith-driven drama, but Wahlberg’s committed performance and the solid, realistic direction by feature first-timer Rosalind Ross hard sell a tough, believable story of how a man of little character came to find purpose in life beyond lust and self interest.

Moving from Montana to Los Angeles to pursue his dream of being an actor, Long falls for local girl Carmen (Teresa Ruiz) who he can only get to by feigning interest in the church she is committed to.

False pretenses gradually give way to a spiritual awakening of sorts, with his mother (Jacki Weaver) and estranged father (Mel Gibson) reluctantly along for the ride.

There’s plenty of talk about religion and values and God and so forth, but none of it is softened or sweetened, with plenty of arguing and challenges to whether Long’s turn towards God is a smart move.

The defining chapter to the story is how Long was afflicted by inclusion body myositis, a form of muscular atrophy that hampered his ability to be fully ordained as a priest.

The film’s inspirational brief is obvious, especially when the real Father Stu pops up during the closing credits. To be honest, though, the film works as a straight drama, even to atheists.

So even if you don’t buy into all that stuff about how Catholics love to reprocess suffering as tests from God – a sure-fire, time-tested argument starter – Father Stu still snaps as a fact-based biopic of a man who used tragedy to make the world better for himself and those around him.

Performances throughout are terrific especially from Ruiz, Weaver and the ever-grumpy Gibson, with Malcolm McDowell (A Clockwork Orange; O Lucky Man) chiming in with superb support as Monsignor Kelly, with whom Long knocks heads.

The film boasts a formidable Catholic pedigree: writer/director Rosalind Ross is partner to Mel Gibson, a producer on the film and probably the most famous of all the Catholic actors working today – and there’s an awful lot of them, including Wahlberg who was an initiating producer on Father Stu.

It’s easy to understand why Stuart Long’s story of redemption appealed to Wahlberg. In his teens Wahlberg was quite the racist thug, engaging in terrible acts of physical and verbal violence he later felt deep shame for.

That he should want to promote positive values of redemption and forgiveness for past sins through film is part of the power of cinema.

In that spirit, even Wahlberg’s secular fans would likely be willing to issue him a free pass for some of the music he perpetrated as Marky Mark and the Funky Bunch back in the 1990s. Not all of it, of course. But some of it.

FIRESTARTER *** (94 minutes) MA
A lean, streamlined update of the 1984 film starring a young post-ET Drew Barrymore sees parents cursed with paranormal powers trying to contain the ability of their daughter to start fires at will. Ryan Kiera Armstrong is effectively broody and moody as Charlie, the girl afflicted with pyrokinesis, with strong support from Zac Efron and Sydney Lemmon as her parents, who grow increasingly desperate as the lethal government agency who experimented on them close in for the kill.

Though the film is no horror classic and misses out on some of the joys of the original – oh, for the apocalyptic presence of George C Scott! – it’s a perfectly good little horror thriller, with a lot of nifty touches that bring this adaptation of Stephen King’s 1980 best-seller into the present day.

Yet it’s been critically slated. Can’t fathom why.