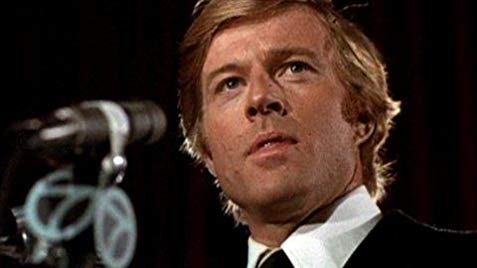 Vote magnet: In The Candidate Robert Redford played Bill McKay, a naive politician who learns fast about what it takes to win.

Much has been made of Robert Redford’s claim that The Old Man & the Gun will be his final film as an actor. If that’s true, he’s gone out on a high – to his credit, Redford doesn’t have the underside of bad films on his CV that most people of his vintage do – but, thankfully and predictably, he has since qualified that statement, especially in terms of directing more movies.

Though his latter-life directing efforts can’t match the sweet spot Clint Eastwood, 88, has found, Redford has helmed some fine films, such as Lions for Lambs, The Company You Keep and – yes – The Horse Whisperer (it grows on you over time!).

Longevity seems to be one of the perks of being part of Old Hollywood and Redford has never been known to willfully waste anyone’s time, especially his own.

Born in 1936, Redford hit Hollywood via TV in 1962. It didn’t take long for him to look beyond the appeal of his good looks and work for something deeper in film.

The star of such classics as The Sting, Butch Cassidy and the Sundance Kid and Out of Africa, Redford also harnessed an independent filmmaking spirit early in his career that lead to his founding of the world-famous Sundance Institute, to which generations of up-and-coming filmmakers owe their careers.

Now 82, Redford’s filmography is a formidable legacy of value-driven, character-based work. His most recent films as actor, such as All is Lost, and director, such as The Company You Keep, show how his instincts for strong stories with challenging themes and topical material are as sharp as ever, making the idea that he would retire even more implausible.

Here is a selective list of Redford’s 25 best films, spanning his career, and including one or two lesser known works.

THIS PROPERTY IS CONDEMNED (1966) After his attention-stealing debut in 1965’s Inside Daisy Clover, Redford proved he was no fluke as the love interest of established star Natalie Wood in this bittersweet Southern steamer. It was his first of many collaborations with director Sydney Pollack.

BAREFOOT IN THE PARK (1967) His winning performance as the hapless partner opposite rising star Jane Fonda in this Neil Simon smash about young love proved Redford could make women laugh as well as provide them with eye candy.

BUTCH CASSIDY AND THE SUNDANCE KID (1969) A classic western – some would argue anti-western for its lyrical style and odd use of music – this is the film that made Redford a star. But he was far from the first choice as Paul Newman’s partner: Steve McQueen, Jack Lemmon, Marlon Brando and Warren Beatty were all approached first before director George Roy Hill defeated studio objections to casting the charismatic up-and-comer.
DOWNHILL RACER (1969) Working with TV director Michael Ritchie, Redford cites this as his first examination of the American drive to win. As producer, he also credits the film – his first foray into independent cinema – with planting the seed for Sundance.

LITTLE FAUSS AND BIG HALSY (1970) Virtually unknown to all but the most hardcore Redford fans, this downbeat film by director Sidney J Furie cast Redford as an unlikeable womanising motorcycle racer opposite the diminutive Michael J Pollard. Though it is one of his most impressive and textured early performances, Redford never really returned to the nastiness he showed here so vividly.

JEREMIAH JOHNSON (1972) As the titular mountain man exacting revenge on the native Americans who killed his family, this visually stunning film (directed by Pollack) became a touchstone for the conflicted Americana Redford would later explore as a director.

THE CANDIDATE (1972) Redford’s second collaboration with Ritchie produced one of the best films of his career, a stinging political satire about a low-level liberal do-gooder recruited to lose an election. Redford’s final post-victory line – “What do we do now?” – has become a classic quote, signifying a man barely in control of the power he has just achieved.

THE HOT ROCK (1972) As a jewel thief driven by more than greed in Peter Yates’ winning crime comedy, Redford dialled down his star status to meld into a killer ensemble that included George Segal, Ron Leibman, Moses Gunn and Zero Mostel. Not a hit but still a gem. The film was made while the Twin Towers were still being built, visible in the helicopter scene.

THE STING (1973) Re-teaming with Butch director George Roy Hill, writer William Goodman and co-star Newman, Redford gave heart to a monstrously popular and stylish crime-revenge comedy that still ranks as one of the most popular ever made. And who could forget that theme?

THE WAY WE WERE (1973) Opposite Barbra Streisand and in the wake of Love Story (1971), Redford shone as a romantic lead. Another hugely successful collaboration with Pollack.

THE GREAT GATSBY (1974) Redford rose above the workman-like direction of Jack Clayton as the enigmatic protagonist of F. Scott Fitzgerald’s classic love/car-crash story. The film didn’t work, but Redford’s casting did.

THREE DAYS OF THE CONDOR (1975) As a low-level CIA researcher, Redford finds himself alone and hunted in a cold New York city, with only his captive Faye Dunaway to keep him warm. Stands alongside The Parallax View and The French Connection as one of the great films of the Nixonian era where paranoia and cynicism reigned.

THE GREAT WALDO PEPPER (1975) Can enemies who faced off in the air over the battlefields of World War I become friends? Redford’s ambitious stunt pilot finds the answer, with the help of an emerging craze called “the movies”. One of his most underrated films, directed by Hill, with great aerial sequences.

ALL THE PRESIDENT’S MEN (1976) Whenever journalists look for positive portrayals of their craft – which are admittedly rare – they look to this film in general and to Redford’s role as investigative reporter Bob Woodward in particular. The one-take scene where he’s scrounging for information on the phone is one of Redford’s proudest moments.

THE ELECTRIC HORSEMAN (1979) Another comedy with Fonda, only this time with a horse, fairy lights and a Las Vegas backdrop. Pollack directed this diverting excursion.

BRUBAKER (1980) What better way to know how to run a prison than to start off as an inmate? Though a dog-whistle at the box office, Redford’s drama about a prison warden trying to do the right thing in the face of systemic corruption remains one of the best films about what being a liberal really means.

OUT OF AFRICA (1985) Meryl Streep wants to tie him down, but Redford’s big-game hunter is more in love with his sense of freedom and the lovely African landscape than he is with her.

SNEAKERS (1992) As the leader of a team of professional computer and security system hackers, this brainy heist comedy was the first film where Redford made fun of the fact he was getting old.

INDECENT PROPOSAL (1993) A million dollars? To spend one night with Robert Redford? Most women would pay for the privilege. That oft-told joke aside, Redford helped Demi Moore and Woody Harrelson give heft to the moral dilemma at the heart of this otherwise cheesy story.

UP CLOSE & PERSONAL (1996) Set in the world of TV news, Redford (playing a producer) and Michelle Pfeiffer (as his star reporter) worked up a good amount of chemistry in their unfairly trashed romantic drama.

THE HORSE WHISPERER (1998) Directing himself as the man who could tame horses with his voice, this was the middle film in Redford’s informal trilogy about the American idyll. The others are A River Runs Though It (1992) and The Legend of Bagger Vance (2000). Think of them as cinematic tone poems to pastoral Americana.

THE NATURAL (1984) All great sports movies use sport as a metaphor for life. The concept might be a tad laboured here, but Redford nonetheless personified the all-American values of resolve and redemption.

LIONS FOR LAMBS (2007) With Tom Cruise, Meryl Streep and a pre-Spider-man Andrew Garfield, Redford directed and starred in this articulate, highly intelligent drama about America’s war on terror. Unfortunately, nobody was interested but it’s still a great, dialogue-driven wrestle with some thorny issues.

ORDINARY PEOPLE (1980) This searing drama about a wealthy family in emotional peril won Redford an Oscar for his directorial debut. We all knew Donald Sutherland was a great actor – but Mary Tyler Moore? Timothy Hutton also picked up a doorstop, as did the film.

QUIZ SHOW (1994) In what is probably his best work as a director, Redford recounts the infamous scandal of the 1950s where game shows were rigged to heighten the drama between contestants. A smooth, increasingly frazzled Ralph Fiennes side-stepped any post-Schindler type-casting with his superb performance as a manipulated winner. The film was a prophecy on the world of reality-TV that was about to hit, and boasted one of the best slug lines of all time: “Fifty million people watched, but no one saw a thing.

…and just one more…

Stuck in the middle of the ocean on a stricken yacht, Redford is a lost urbanite who must survive everything the sea and sky can throw at him. Directed by JC Chandor (Margin Call; A Most Violent Year), the film is both a great survival story and a declaration that Redford is one of the very few actors who can hold an audience with almost no words and without another soul on the screen.