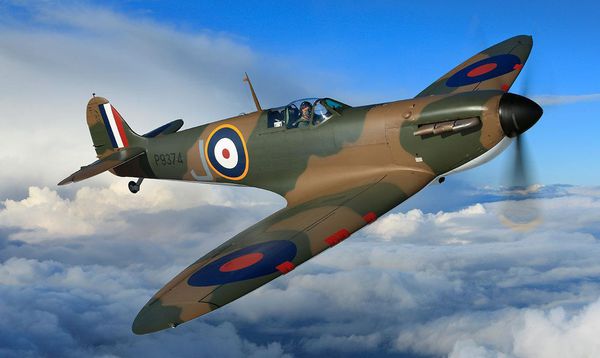 The valiant legacy of the Spitfire fighter and its role in pushing back against Hitler’s invasion of England is profiled in a superb documentary.

The evolution of the legendary Spitfire fighter and the crucial role it played in pushing back against the might of Hitler’s Wehrmacht – which had already conquered the skies of Europe – is chronicled in this dutifully crafted tribute. War buffs will love it.

Featuring a mix of archival footage and interviews with veterans, all tied together with a narration by Charles Dance, it’s a conventional package, yet a rousing one.

Having subdued most of Europe in a very short time, Hitler’s eyes turned towards England, confident that his huge air power would make short work of whatever antiquated jalopies the Royal Air Force had, especially given that his was several times larger, far more advanced and battle hardened.

England turned out to be a tad more prepared as the Spitfire helped fend off wave after wave of increasingly determined German planes, ultimately stemming the tide of Hitler’s advance.

There’s plenty of detail to marvel over, the brightest nugget being how the Spitfire’s wing design was nicked by a British designer who was inspired while working in Germany before the war.

With the rapidly shifting demands on the plane, huge teams of designers, with women prominent amongst them, kept developing the plane until, by war’s end, there were no fewer than 25 models.

The role women served in designing, building and delivering the Spitfire is given plenty of attention, with one veteran getting the surprise of her life when she is reunited with one of the country’s few surviving planes.

Of note, too, is how the huge loss of pilots suffered by the RAF and the physically punishing grind of combat is offset somewhat by the open admission by some vets that fun was a large part of their war experience. We also saw this come up in the WW1 documentary They Shall Not Grow Old, suggesting that humanity can triumph even when enveloped by the horror of war.

Now, any war buff or aviation nut will no doubt feel an odd mixture of elation and frustration with this film. For while it is a worthy, informative and entertaining tribute to the Spitfire, the claims of the plane’s importance during the war will, quite understandably, be met with objections. What about other fighters, such as the Mustang P-51?

The film does fleetingly acknowledge the place of other planes in the pantheon of great WW2 fighters – the eternally underrated Hawker Hurricane gets a mention, as do the German fighters that challenged the power of the Spitfire – but, to be fair, had the film gone off on tangents it would have cost the documentary its focus.

Buffs aside, young filmgoers should get a lot out of this film, primarily for chronicling the first time in history where mastery of the air became a critical part of any large-scale military operation, a lesson the Americans quickly learnt after the Japanese paid a visit to Pearl Harbour.

The second of five intended installments to the Harry Potter sub-franchise is, to be honest, an ornate, expensive-looking, visually dull slog.

The downcast and uncharismatic Newt Scamander (Eddie Redmayne, who won an Oscar for The Theory of Everything) is recruited to track down and capture the evil Gellert Grindelwald (Johnny Depp), who has escaped from prison.

His plan is to gather recruits to his cause of having “pure-bloods” rule the worlds of wizards and mortals, invoking the language and gestures of Hitler who, though not directly referenced in the film, was on the rise at the time the film is set.

Now, you know how sometimes with cordial concentrate you find a few drops at the bottom of an otherwise empty container and you think “I bet there’s just enough here for another glass” but you find after adding water that there wasn’t and that though you can still faintly taste the flavour it’s basically just an unsatisfying glass of water? Well, Fantastic Beasts II is the cinematic equivalent of that experience.

With a $200 million budget it sure is supposed to look impressive, with huge sets and swirling effects, but – Heaven help us – here is yet another big film that looks just that same as a stack of others. Eternally overcast and dimly lit, there are no fresh idea here, just more swirling bolts of lightning and critters that look as though they’ve escaped from Middle Earth.

Worse still, you can really feel the strain in the film’s laboured storytelling.

Written by HP creator JK Rowling and directed by David Yates, who did the previous FB film plus the final four HP films, the movie stands as a monument to sequel padding, as evident by the inordinate amount of back-stories and side-stories there are. They’re all over the place and damned annoying. It’s as though they’re trying to fill in the many blanks in the narrative and build up enough narrative bulk to drive the next chapter.

This accounts for the film’s sluggish pace, which, frankly, is often quite boring with its wearying stop-start, two-steps-forward, one step-back momentum.

And while there’s no argument JK Rowling is a brilliant, hyper-successful novelist, her screen-writing skills might need a lot of sharpening up if her first two efforts are any guide. Inspired direction would have helped, but Yates is clearly in auto-pilot mode.

The key symptom of this is how, beyond the clumsy story-telling and pedestrian direction, is the moribund central performance by Redmayne. He simply fails to bring much light or life to Newt. If only one of the energy bolts or magical wisps flying around in the film would strike him in the keester and liven up his character a tad.

As is the tradition with post-content cinema in the 21st century, the marketing tsunami behind the film will likely get the box office numbers it needs to justify a third entry into this far-from-compelling sub-franchise.

Or maybe not. We can only pray.

Although the message that “crime doesn’t pay” presides over the crime movie genre, we are, nonetheless, often invited to side with criminals, to see the world from their point of view and even to like them despite what they do.

Veteran actor Robert Redford, now 82, has starred in more than his fair share of films where his on-screen deeds are at odds with his likeability – The Hot Rock, The Last Castle, Sneakers, Indecent Proposal, The Candidate, etc – and his latest triumph, The Old Man With the Gun, slips neatly into line.

Set in the 1980s and based (mostly) on a true story, Redford plays Forrest Tucker, an extremely genial, smartly dressed old fellow who makes a very handsome living robbing banks in between his stints in prison, which he has become a master at breaking out of.

His robbery method is as simple as it is effective: he simply walks into a bank, hands the teller or manager a note informing them that they are being robbed, opens his coat to show them his gun – always off screen – then kindly and quietly gets them to fill his suitcase with cash.

With no violence, no shooting, not even a raised voice, but always with a smile, he then leaves the bank, walks to his car and drives off.

On his tail is Detective John Hunt (Casey Affleck, in a terrific, subdued turn), who is almost as charmed by Tucker as Jewel (Sissy Spacek putting in a fabulously natural performance), a woman who falls under Tucker’s spell, and with whom he forms a strong – and rare – emotional attachment.

With his elderly accomplices (Tom Waits and Danny Glover) in tow, he engages on a well-publicised crime spree. They are promptly dubbed the “Over the Hill Gang” and instantly become media darlings.

Director David Lowery has gone to a lot of trouble replicating the grainy look and filming styles of the period, including the movie music and graphics of the time. His chief focus, nonetheless, is to keep the character of Forrest Tucker within the popular perception of Redford’s persona – the handsome, ever-likeable loner. And it works, both as a light crimedy and as a valentine to Redford.

Much has been made of Redford’s claim that this will be his final film as an actor. If that’s true, he’s gone out on a high – to his credit, Redford doesn’t have the underside of bad films on his CV that most people of his vintage do – but, thankfully and predictably, he has since qualified that statement, especially in terms of directing more movies.

Though his latter-life directing efforts can’t match the sweet spot Clint Eastwood, 88, has found, Redford has helmed some fine films, such as Lions for Lambs, The Company You Keep and – yes – The Horse Whisperer (it grows on you over time!).

Longevity seems to be one of the perks of being part of Old Hollywood and Redford has never been known to willfully waste anyone’s time, especially his own.