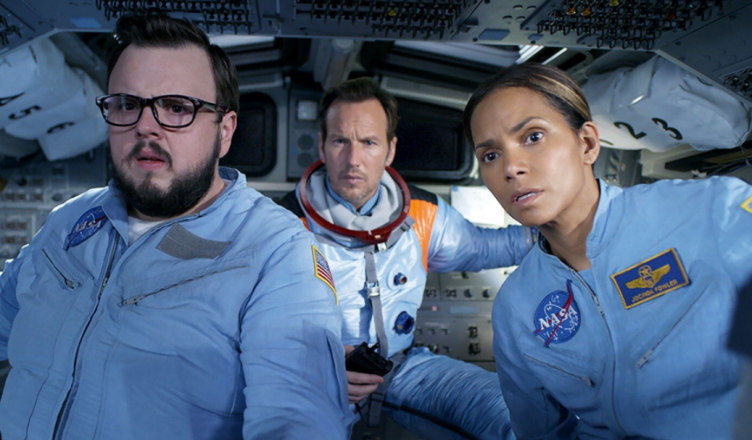 MOONFALL *** (130 minutes) M
Bringing us all to the brink of oblivion once again, fun-loving director of mass-scale disaster Roland Emmerich – who delivered unto us such apocalyptic visions as Independence Day I&II, Godzilla, The Day After Tomorrow and 2012 – offers up another enjoyable escapist cheeseburger of a movie, one that belongs squarely in the “leave your brain at home” category.

Our friend The Moon has gone off-orbit and is now heading, in ever-diminishing circles, towards Earth, causing havoc with tides and gravity, but not with mobile phone reception, which miraculously remains untouched.

As the Moon drifts ever closer and the mayhem on Earth intensifies, the hearty trio commandeer a space shuttle and fly through a perilous debris field. Their payload: one of those special storied devices that, if detonated in exactly the right spot, can bring any trouble to a sudden end, usually with a big bang.

As he demonstrated in 2012, easily his most enjoyable disaster pic, Emmerich has always championed the need for plenty of levity to offset the large-scale silliness of his cartoonish epics. Hence the film is full of gags, most of which work nicely, especially in the first, rapidly-paced part of the yarn.

There is, of course, some mandatory family drama, presumably to ground the shenanigans in something resembling relatable human emotion. Thankfully, this is limited to the fate of the astronaut’s son Sonny (Charlie Plummer) and wife Michelle (Kelly Reilly) as they scurry about looking for safety while the heroes are doing their thing.

These scenes constitute the most expendable and uninteresting parts of the movie. If you need to do a dunny run or check your stocks during the picture, this is the time to do it.

But you’re not here for Chekhovian drama; you’re here for cheeseball action and screen-filling visual effects, which the film delivers in sufficient quantities to satisfy anybody in the mood for two hours of cinematic chewing gum.

The VFX sequences are impressive, especially on a giant IMAX screen. Admittedly, the sight of tsunamis swelling over cityscapes is nothing new (thanks to Emmerich’s own The Day After Tomorrow), but he does have some novel touches here.

As the Earth’s gravity weakens we observe that strange, ironic beauty that comes with mass-destruction as things are pulled up from the surface and into the sky briefly before returning Earth. Thus we have boats being dumped in mountain ranges, trains being thrown about like ribbons, and so forth. It’s nifty stuff.

The film has a lot of fun playing on various conspiracy theories about the true nature of the Moon, their wackiness only one stop short of the planet being made of brie.

With today’s media ether being laced with anti-vaxxer chatter, now is not the time to encourage the idea that conspiracy theories be taken seriously.

Yet that’s something Moonfall is at no risk of. It’s just a big-screen cheeseburger. It might not be all that nutritious, but it tastes good. Enjoy.