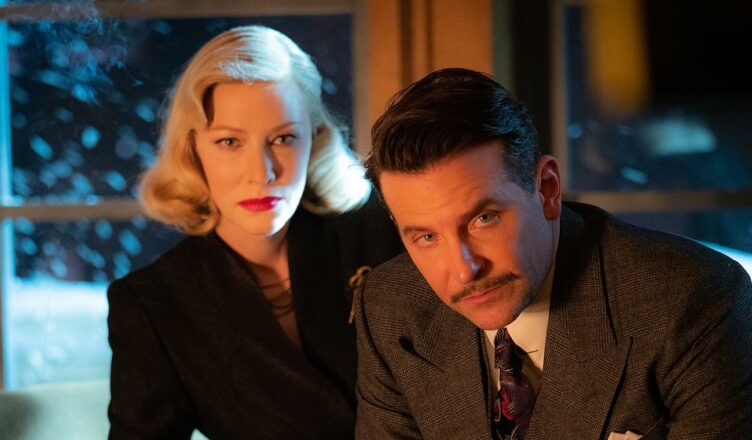 NIGHTMARE ALLEY ***1/2 (150 minutes) MA
It’s not official, but those of us who squirmed through 2018’s The Shape of Water can consider the beguiling Nightmare Alley as a make-up movie from the ever-erratic Guillermo del Toro.

Thankfully stepping away from the fantasy mode that gave us such turgid films as Pacific Rim, Crimson Peak and the aforementioned Shape of Water – did that sex-with-fish movie really win Oscars for Best Film and Best Director? – del Toro here serves up a much more measured, grounded and involving tale that has something those films lacked – namely, a decent story.

Based on the 1946 book by William Lindsay Gresham and bearing more than a passing resemblance to the very fine 1947 Tyrone Power movie, Nightmare Alley is an intriguing, engrossing, beautifully shot noir thriller following the eventful trail of Stanton Carlisle (Bradley Cooper), a seasoned con man who thinks he’s got everybody’s number.

Having fallen on hard times, Dame Fortune steers Stanton from a train at its final stop to a nearby carnival where he immediately finds himself in his element amongst the performers, especially those who specialize in tricking the local yokels out of their money in exchange for cheap thrills.

He particularly loves the mind-reading ruse of Zeena (Toni Collette) and sees a lucrative future for such an act that goes far beyond the flapping canvasses and cheap signage of the carnival. Having bonded with his fellow carnies, the chance of making big dollars in the big city prompts him to leave, taking along “Electro-Girl” Molly (Rooney Mara), a diffident girl who is a crucial part of his plan.

The pair conquer New York by playing classy venues packed with well-dressed rich people, most of whom are as mesmerized by Stanton’s fake psychic ability as the poor farm folk were back at the carnival. Seems the desire to believe in a life beyond crosses all classes.

Only icy blonde psychoanalyst Lilith Ritter (Cate Blanchett) sees Stanton for the shyster he is and before you can say “takes one to know one” – only a slight paraphrase of what he actually says to her – they hatch an ingenious scheme to milk the rich.

Handsomely produced and bathed in expressionist lighting to evoke that visually seductive noir feel, Nightmare Alley is a ripping tale of deceit, betrayal and comeuppance, with the occasional murder.

Oozing with oily charm and sporting a fast mouth with a slippery tongue to match, Cooper proves a perfect fit as the suave, ego-driven confidence man. He’s the quintessential rat with a gold tooth who knows a good thing when he sees it. Or thinks he does.

As the sexy psychoanalyst, Blanchett is a study in cool calculation; as beautiful as the art deco design of her carefully half-lit office, she looks and moves like the traditional femme fatale, right down to her luminous blonde bob and the little friend she carries around in her designer purse. Stanton certainly has his work cut out for him staying on top of his game in her presence.

Showing a love for subdued composition and seamless editing – contrary to del Toro’s usual style (how bad was the editing in Pacific Rim?) – the lush cinematography by Dan Laustsen makes the most of the film’s opulent period production as the story moves from the mud and tents of the Depression-era carnival to the ornate interiors of upper-class New York.

Though long, del Toro uses that time to build atmosphere in the first half and the set-up in the second, allowing the many second-tier characters to breathe, most notably stage psychic Zeena (Toni Collette), carnival owner Clem (Willem Dafoe) and Miss Kimball (Mary Steenburgen), a wealthy New York client who’s a little too eager to communicate with her departed son.

As with most films that involve confidence tricksters, there’s a guilty thrill in seeing whether the scamsters get away with their scheme, so while del Toro follows the 1947 film by preserving the narrative’s moral sting – Catholics will love that – he does a very good job playing on that naughty sense of complicity, as though we’re in on it.

The one small but unavoidable drawback to the film is how, in keeping with con movie convention, there are some pretty big twists.

Now, the best twists are, of course, the ones you can’t see coming, but given how we’ve been conditioned to expect twists in films like this, the element of surprise is diminished somewhat. It’s the old thing of expecting the unexpected, so that when it arrives, the initial gasp is accompanied by the knowledge that you knew something like this would happen, sooner or later.

Perhaps del Toro could have worked harder at sharpening the film’s surprises though, to his credit, he does deliver at least one certifiable doozy.

Footnote: In tribute to the 1947 film version of Nightmare Alley Romina Power, the 70-year old daughter of Tyrone Power, has a cameo in one of the early carnival scenes.