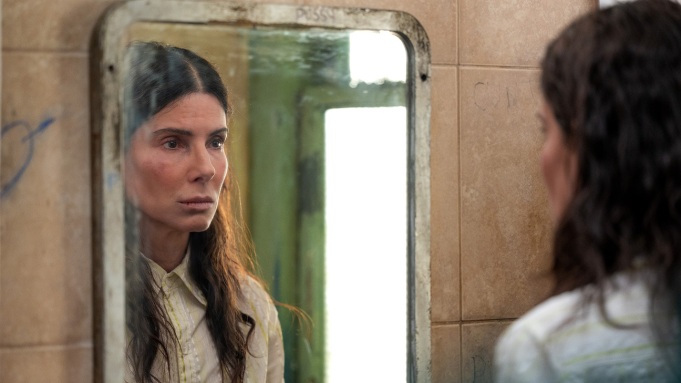 Bad reflection: Sandra Bullock is on the road to redemption in ‘The Unforgivable’.

Working hard to honour her parole obligations, she’s determined to start her new life by locating and reconnecting with her young sister Emily (Emma Nelson), who has little memory of her having long been happily ensconced with her adopted family.

Running parallel to Ruth’s quest for redemption is a powerfully motived revenge plot that director Nora Fingscheidt slowly brings to the boil as Ruth gets closer to fulfilling her dream.

Some clumsy, easily forgivable moments aside, The Unforgivable delivers a reasonably tense, magnetic tale of twisted justice and sacrifice. The film takes its time unfurling the story, drip-feeding details about what is going on and how all the pieces fit together.

As Emily’s father Michael, he does a swell job reflecting what most people would probably think of Ruth’s attempt to suddenly drop back in to Emily’s life. And it’s not polite.

THE LOST DAUGHTER **1/2 (122 minutes) MA
A chance encounter on a pretty, semi-secluded Greek beach triggers a change in holidaying professor Leda Caruso (Olivia Colman). She’s meant to be there relaxing, but after finding a lost little girl and returning the child to her mother Nina (Dakota Johnson), she finds herself mysteriously in possession of the kid’s doll.

Refusing to return it despite the little girl’s anguish over its absence, Leda involuntarily reflects on her rather dire record as a mother of two daughters, whom she abandoned for reasons so selfish and bohemian the character has trouble re-engaging our sympathy. Frankly, she’s a bit of a prick.

Maggie Gyllenhaal, best known as an actress, has received much praise for her directorial debut, which she also wrote.

To her credit she certainly proves a dab hand at building a sense of emotional unease as the truth about Leda slowly unfolds. The prickly acquaintance she has with Nina and her family creates anticipation that matters are going to come to an ugly head.

Colman – who, we have to keep reminding ourselves, won a Best Actress Oscar for the exceedingly mediocre 2018 film The Favourite – is quietly impressive in a nuance-rich portrait of a woman who is going through an inner crisis that might add up to a breakdown.

The supports are universally fine: Johnson again shows there’s more to her than the 50 Shades films (thank you, Movie God); Paul Mescal cuts through as a randy hotel employee; and veteran Ed Harris is terrific in a deeply etched turn as the weathered resort owner.

Yet, the film’s pace does wilt and the wavering story doesn’t totally pay off, leaving us with a decidedly “meh” finale that’s not all that satisfying; Gyllenhaal prefers to keep things on simmer when there are lots of spots she could have turned up the heat.

The film is adapted from the novel by the pseudonymous Elena Ferrante, so perhaps it’s a case of not wanting to mess with the source.