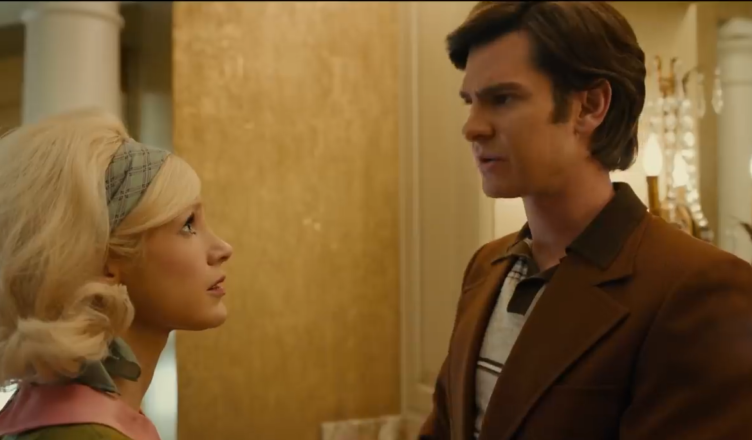 In the name of God: Jessica Chastain and Andrew Garfield play Tammy Faye & Jim Bakker in ‘The Eyes of Tammy Faye’.

THE EYES OF TAMMY FAYE ***1/2 (126 minutes) M
Given how close they were to caricatures in real life, it would have been so easy for a film to prey on the scandals and excesses of 1980s televangelists Tammy Faye Bakker and Jim Bakker, making a meal of their tabloid image as a garish pair of populist preachers whose love of the good life was generously funded by their followers.

But all the parodies and satire have been well serviced by sketch comedy and stand ups, something The Eyes of Tammy Faye seems to have wisely factored in to its admirably counter-intuitive approach.

Instead of going the cheap-shot route, the film takes a largely sympathetic, albeit critical view of the couple whose faith, wealth and rather novel interpretation of God’s word lead to an outsized life, a powerful television empire and a fall from grace that played out almost entirely in front of cameras.

As heightened as their lives and personalities were, the story is grounded in the sobering drama of a couple whose dreams didn’t quite square with the reality surrounding them.

Thus we have their infatuation with the power of television as Jim dreams up grand projects to grow the reach and impact of their ministry, all thanks to the cascades of cash flowing in from their loving donors.

The film is at pains to show how Tammy, for all her splashy make-up and look-at-me wardrobe, had almost nothing to do with their business, the strong suggestion being that her ignorance was one of the reasons why things got so out-of-control.

The sensational, scandal-spangled story, directed with notable measure and decorum – and a love of montage – by Michael Showalter, assiduously avoids any overt fun-poking as it seeks to humanize these people by looking beyond the ridicule that surrounded them.

And the film pulls it off with great panache, thanks to the story being earthed by three outstanding performances.

She channels Tammy Faye as a ball of life-loving, gospel-fuelled energy, her high spirits, radiant smile, passionate gospel songs (all sung by Chastain) and love-for-everybody philosophy totally magnetic to behold, from the film’s attention-grabbing opening frames to the memorable finale.

Admittedly, Chastain’s performance had a lot of rich reference material to draw upon. The film is based on the 2000 documentary of the same name and inspired Chastain after seeing it during her press tour for Zero Dark Thirty. There are also hours of Tammy Faye on YouTube.

Yet it never feels as though Chastain is putting in a feature-length impersonation, merely mimicking her way through Tammy Faye’s dizzying character arc. She presents a fully-formed character, not a pastiche.

The same with Andrew Garfield as Jim Bakker. His finely etched portrait is positively radiant; brandishing a camera-ready smile and a slick, highly persuasive Bible-quoting turn-of-phrase, he could persuade anyone of anything, especially when it comes to getting his loyal legions of TV followers to hit the phones and give just that little bit more.

In scenes exploring Jim and Tammy’s courtship we see his eloquence work its seductive magic on Tammy as he declares how Love of God is Love of Money, two concepts he first fuses, then confuses.

It’s a golden moment and a crucial story point deftly nailed when he drives up in a giant new car and Tammy asks – through a cute puppet character she has invented to help preach to children – how they can afford it. His sincere response sets her understanding of how their unique brand of religion works – for their followers and for themselves.

The chief measure of just how much they grind against the televangelist mainstream is registered through the critical eye of ultra-conservative, anti-gay pastor Jerry Falwell.

Again pushing against any temptation to caricature or spoof, the superb Vincent D’Onofrio plays Falwell as a self-assured man of the people, a self-appointed saviour driven by his own convictions to save the soul of America.

It’s his presence that highlights what a big deal it was that Tammy Faye, in the midst of the 1980s AIDS crisis, bravely defied Falwell’s hatred of homosexuals by conducting a TV interview with Stephen Pieters (Randy Havens), a gay pastor who was HIV-positive.

Clearly part of the film’s purpose is to acknowledge how Tammy Faye used the power of her platform to promote love and understanding for those people Falwell and fellow homophobe pastor Pat Robertson (played by Gabriel Olds) would happily condemn to the fires of Hell.

It’s the film’s most touching scene that justly places Tammy Faye at the centre of the fight for gay rights. No wonder the LGBT community love her so.

The movie’s other big motivation is to show how Tammy, for all her excesses and wealth, didn’t actually do anything wrong, at least legally. All the embezzling, payoffs, misappropriation of funds was Jim’s doing, but when the hammer of public opinion came down, it came down on both of them.

He went to jail and Tammy Faye was reduced to living alone in a small flat, pitching bad ideas to uninterested young TV producers.

Not fair, says the film, a point it makes well by showing in a terrific finale how even after such a steep fall it’s possible for a person to rise again, just like the Phoenix – only with plenty of mascara.