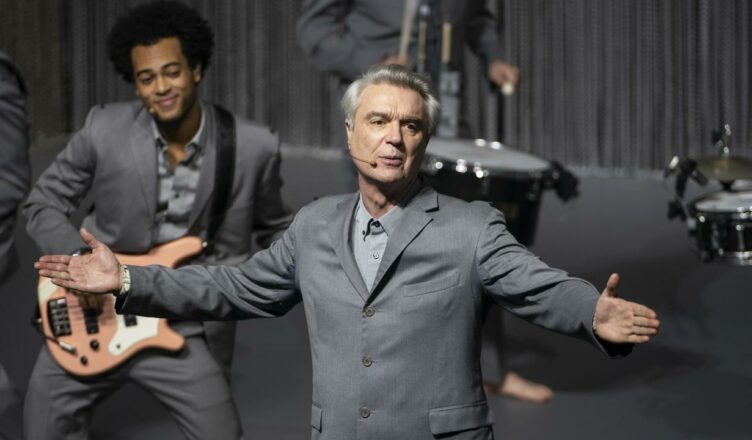 DAVID BYRNE’S AMERICAN UTOPIA **1/2 (101 minutes) M
The term “average” is not a word readily associated with the extraordinary David Byrne, yet that’s the most appropriate adjective when it comes to describing his new project.

Indeed, anyone expecting Spike Lee’s movie of Byrne’s musical theatre production American Utopia to be anything more than an adequately photographed concert film is going to be sorely disappointed.

Fans excepted, of course. Members of that breed stretch back to the formation of his phenomenal band Talking Heads in 1975 and are on show here in all their middle-aged glory, cheering and dancing. As diehard fans they’ll adore anything he does, God bless ’em.

A broad stage adaptation of his 2018 album Byrne, in grey suit and bare feet, announces a general theme to the show being dire the need to repair the connection people had with each other in the pre-digital age.

We presume it’s the pre-digital age, anyway, signalled by the pretty funny joke he makes early on about those in the audience who met through apps and those who met through normal means. But it’s not as though Byrne pursues or develops the idea with any great zeal across the show.

It’s essentially a run-through of songs old and new as his band of 11 players, all similarly dressed and in bare feet, swish about in impressively choreographed patterns on a bare stage defined by three chain-link curtains.

Byrne is big on percussion with about half the players strapped to drums of varying size and configuration while the others bear traditional instruments, all of which are connected wirelessly to their amps.

For some reason that’s a big deal for Byrne. He introduces one song by making a huge point about how his stage is uncluttered by cords or wires running across it and that all the music and singing is being performed live without backing tracks or pre-records.

He makes this statement as though our collective response is supposed to be: “What?! In 2020? Wireless instruments? Really?! No wires on the stage? Makes you glad you lived this long.”

Byrne is an renown innovator, but if he’s expecting some sort of special award for using wireless instruments and mics he might be waiting a while.

In keeping with the minimalist style of the piece, Spike Lee’s camera coverage is fairly boiler plate, with a few standard embellishments such as overhead shots and second unit work where segments of the show were staged separately to allow the camera to be on stage.

In full flight Byrne is a marvellously energetic performer, echoing his stage presence in Stop Making Sense, the 1984 Talking Heads concert film directed by Johnathan Demme considered by some – though not by all – as a masterpiece.

His new material is showcased though, to be honest, the biggest audience reaction Byrne gets is to his old Talking Heads stuff, such as Once in a Lifetime, Home and

Politics seeps in as Byrne makes a passionate plea with his people to get out and vote, noting how the 2016 election had a 55% turn out rate, while local council elections average about 20%, with an average age of 57. He even points people to a table he has had set up in the foyer where people can register to vote. That’s Byrne’s fist pump for democracy.

Things get more earnest when he takes up the cause of Black Lives Matter, singing a protest song written by singer/actress Janelle Monae in response to black victims of police brutality.

At this point the film is less David Byrne’s American Utopia and more Spike Lee’s American Dystopia. As Byrne sings out each victim’s name we cut to stand-alone shots of a relative holding a large photograph of the person. The song is even updated to include mention of George Floyd.

While American Utopia is, in all fairness, a fine concert film it could also be a contender for most overrated movie of the year, if the reviews it’s been attracting thus far are any guide. It also contains a distracting, hammy performance from one of Byrne’s backing singers, whose constant mugging is irritating.

In regards to American Utopia being hailed as some masterpiece of the concert movie form, one is at pains to point out that the most novel and interesting piece of camerawork in the film is the use of a tiny GoPro action camera to follow Byrne around as he leads his players through the audience singing Road to Nowhere.

Wow. Makes you glad you lived this long.