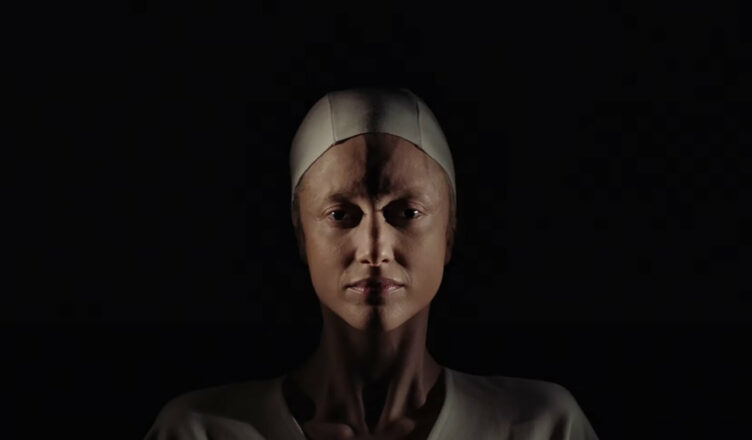 POSSESSOR *** (104 minutes) R18+
In that gleaming, foreboding near-future dystopia with which filmmakers appear to be infatuated, a mysterious shadowy agency has the technology to transfer a person’s consciousness into the body of another, completely taking it over for a brief period. Sounds like fun, what?

But never mind all the good such a process could do. Those in charge of the brain-piercing technique seem primarily interested in using it to kill people on demand. It’s a murder-for-hire business, the trick being that after the killing, the process must be reversed so the host’s mind can leave the possessed body and return to the lab where their true body is lying on a table with its head strapped into the apparatus. This exit strategy involves killing the possessed body.

What could possibly go amiss? You guessed it. While agent Tasya Vos (an uglified Andrea Riseborough) is on a mission inside the body of Colin Tate (Christopher Abbott) to execute a corporate head (Sean Bean), she gets stuck in that body.

The film’s chief issue is that nobody but a sociopath is likely to feel any emotional connection to any of the film’s characters, so dramatically the film is exceptionally dry.

Still, it’s a big advance on the director’s previous effort, the tedious Antiviral (2012). While that film was painfully dull, Possessor can at least boast that it’s not boring for a single second. And that’s an understatement.

The other big boast the film is entitled to make, and which has been the subject of much cyber chatter, is how its portrayal of violence hits a new level of vividness.

With Cronenberg harking from the same “body horror” school as his father, his object here is to push the art of practical make-up effects to the point of photo-realism.

On that score he succeeds to a frightening degree.

When somebody gets stabbed, jabbed, shot or sliced up in Possessor it looks real, with Cronenberg thrusting the camera up close so you can squirm at every gory detail.

The blood flows freely and frequently, oozing and gushing out in rivers and fountains that look about as real as any normal person could stand. Some might find these visuals as fascinating as they are shocking. Others might simply find them repulsive – a perfectly reasonable reaction.

There are no cutaways or obvious prosthetics. It’s graphic as all heck and a must-see for anyone interested in registering just how realistic the art of horror movie make-up effects has come since Tom Savini’s pioneering work in the 1970s and 1980s (see Creepshow for a great sampling of his brilliant work).

As confronting as these moments are, could it be argued that while the effects are state-of-the-craft, could they constitute an evaporation of style? Why be so graphic? Why not deploy subtler means?

It’s commonly argued how, when it comes to violence, suggestion is more powerful that being explicit, with the work of Alfred Hitchcock, and his iconic shower scene from Psycho standing as the standard example.

Yet graphic violence has its stylistic place in a suitable context, with Saving Private Ryan and GoodFellas being just two famous examples.

In the case of Possessor, the depiction of extreme violence is counterpoint to the film’s subdued mode, thus making it more shocking and, therefore, more effective.

It’s graphic with a purpose, which is to shock people with the reality of violence. In that sense, the film’s portrayal of violence can be defended from charges that it is gratuitous or pointless. Needless to say, it all comes down to a matter of taste and personal tolerance.

The intensity of the film’s violence helped earn it a justified R rating, along with its depiction of nudity and sex.

So, it’s not for the sensitive or squeamish or for anyone thinking they’re in for an off-the-shelf horror film.

That’s the one thing Possessor is definitely not.