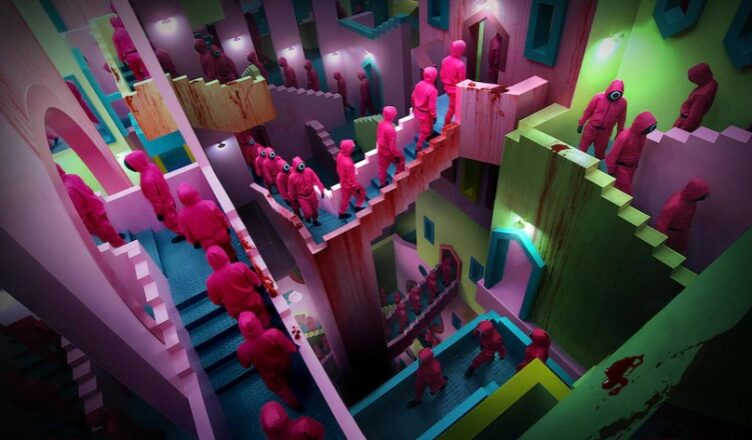 Not an exit: One of the impressive sets in the less-than-impressive ‘Squid Game’

SQUID GAME * (479 minutes; nine episodes) MA
whole series review
In Squid Game a large group of people in severe financial trouble are taken to a secluded island and made to participate in a series of lethal games where losers are progressively eliminated – usually shot – as they vy for a prize pool of money that grows each time somebody gets killed. Last person standing gets the loot.

Sounds like low-flying fun, what? And in a kinder world that had some respect for our patience and intelligence Squid Game would have existed quite comfortably as a nifty, throwaway horror-thriller running about 80 minutes, an easily digested blood-splattered exploitation flick you watch before moving onto something more worthwhile.

Unfortunately, we don’t live in that world.

We live in the world where the threadbare premise of Squid Game is mercilessly drawn out over nine interminable episodes, running just on eight hours and moving like a superannuated slug.

You’ve seen the hype. Forget it. Squid Game is a dirigible-sized dirge, a boring, bloated, bloodthirsty serving of craptacular D-grade schlock complete with pretentious twaddle about being an allegory of 21st century capitalism.

And some really, really awful acting.

Nothing amiss with the “lethal game” idea, mind. The premise harks back almost a century to 1932’s The Most Dangerous Game and the genre includes such other notable films as Arnie’s The Running Man (1987), Battle Royale (2000), The Hunger Games (2012-15), the Saw series (of course) and 1975’s Rollerball, probably the best iteration of the idea to date. Oh, and let’s not neglect Australia’s own 1982 epic Turkey Shoot.

The problem with Squid Game is that it’s 95% padding – and slow, drawn out, poorly directed padding at that.

Hwang Dong-hyuk, who is also credited as writer and creator, seems entirely uninterested in any sort of style or polish or subtlety that might justify the show’s length.

Instead he opts for crash-bang mode that robs the game sequences of any tension – hasn’t he seen even one Saw movie? – and keeps the characters from developing beyond two-dimensional cardboard-thin cliches – though, to be fair, some of the main characters don’t get beyond one dimension.

Compounding this a worm-burning standard of performance that makes you think the entire series is composed entirely of first takes.

That’s not to say that Lee Jung-jae, Park Hae-soo, Jung Ho-yeon, O Yeong-su or Heo Sung-tae are terrible actors. But their performances are, well, terrible, especially from Heo Sung-tae, whose turn as a gangster consists mainly of grunts and sneers. God, it’s hard to watch.

As is the series. Consumed by your humble reviewer in two marathon gulps, the experience of sitting through every minute of the whole shebang proved to be a resoundingly hollow experience. You really feel your time being wasted.

There are no characters worth investing in; no drama to draw you in; no suspense, or fear, or horror, or dread, or shock – even as players are brutally murdered out of frame, the gunshots barely registering on those people in the frame. It’s just dire direction.

As for the lashings of graphic ultra-violence in Squid Game, there are stabbings and shootings and all sorts of killings going on all over the place, often with gore and geysers of blood spurting and leaking all over the shop like crimson sump oil. And all without an iota of style.

It’s an age-old syndrome we see in Squid Game; drench a film with wanton carnage and buckets of blood to make up for the chronic lack of pace and ingenuity. Well, to try and make up for it, at least.

Even on its own comic-book terms Squid Game can’t keep it together.

The games are supposed to be held on a privately owned, heavily guarded island. But, gotta tell ya, for a tightly controlled, super-secure facility, it’s not all that secure.

Despite being closely supervised 24/7 by masked guards and cameras, the players get to sneak around with knives, lighters and secret mobile phones, they have sex in the toilets and go crawling around in air ducts undetected.

You know, it’s possible Squid Game might have been marginally passable as time killing schlock if, on top of everything else, it wasn’t so damned pretentious.

Yet about half-way through the series – after a whole lot of chopping and killing and dismemberment and blood blood blood – we suddenly get hit with a wet bag of pseudo-philosophical bulltwang about how the games are based on equality where everyone gets a fair go and there’s no discrimination of any sort.

Bleah. It’s just nonsensical twaddle, delivered as though it was deep. Players bend the rules, have the rules bent on them, are terrorized and murdered by other players and are subject to summary execution by guards, even if they complete tasks exactly as instructed.

There’s even an earnest attempt in the closing chapter of Squid Gameto wrap the whole shemozzle in meaning, as though what we’ve just sat through is a cleverly conceived parable about the human condition.

Two words for that: No Sale.

That said, there are a few scant moments in episode two that actually feel promising, where the players get to choose whether the brutal games should continue or not. This is the only time when any claim that Squid Game is truth-speaking about the perils of debt-driven capitalism hold any water.

Alas, the ham-fisted storytelling and sloppy direction see that possibility quickly evaporate, leaving Squid Game’s only detectable theme being the one about how people in debt will do desperate things to get out of debt. Gee Wizz.

Admittedly, some of the visuals are impressive, with giant game stages and one oft-used set resembling that Escher sketch with all the stairs.

The show has proved quite the global hit on Netflix, especially in Australia, and is thus far the platform’s biggest show to come from South Korea. Good on it.

No definitive answers here, just a tentative bit of theorizing to posit how, in the middle of a pandemic where people are stuck in their homes eager for diversion, they’ll pretty much sit through anything that kills time.

And there you have it, folks. The most generous way to describe Squid Game: a time killer.

Still, there is one vaguely uplifting takeaway after having sat through all nine episodes of such a dreary series.

To wit: director Hwang Dong-hyuk has stated (to Variety, no less) how the development of the series has left him exhausted, thus there is very little prospect of there ever being a Squid Game 2.