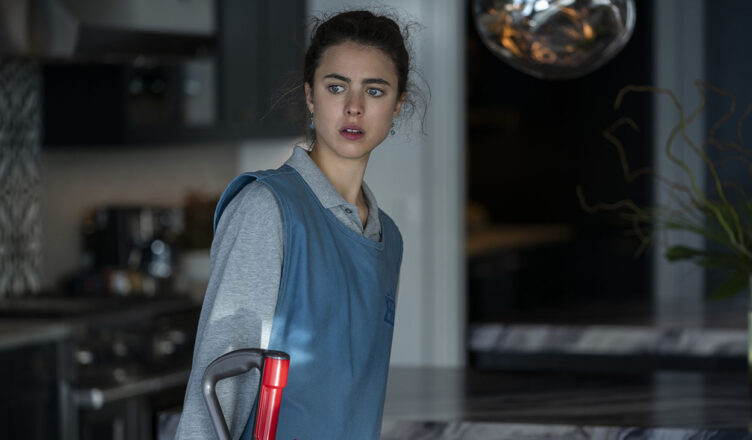 Cleaning house: Margaret Qualley is outstanding as a single mother in the drama ‘Maid’.

MAID ****1/2 (527 minutes; ten episodes) MA
whole series review
There are many times while watching Maid when you feel like reaching into the screen and giving its central character Alex a big warm hug as tribute to her strength, endurance and love, for standing up for herself, for being proactive and protective, for not being pushed around.

At other times you wish you could tell her to wise up, to stop being so stubborn, so naïve, so gullible and stupid. If only you could tell her to use her common sense, to take stock of her dire situation and take advantage of opportunities, even if it means being a little more forgiving and a little less selfish.

Such is the depth of feeling, nuance and authenticity we find in Alex Russell (Margaret Qualley), a young, single, unmarried mother of a three year-old daughter who steals away from her home after an outburst from her alcoholic partner Sean (Nick Robinson) instils a fear of escalating violence.

It certainly seems a heroic and sensible thing to heed the warning signs, but Alex soon learns how the definition of what constitutes domestic violence and emotional abuse is very rubbery.

And while she believes she has fled one nightmare, Alex finds herself caught in another; she is awestruck by the bureaucracy and form-filling involved in seeking emergency shelter, finding work and protecting herself and her daughter Maddy (Rylea Nevaeh Whittet) from Sean.

Anchored by a great lead performance by Margaret Qualley (best-known as the hippie chick in Once Upon a Time in Hollywood), Maid offers a captivating, humane, unflinching look at the raw realities of day-to-day life for women who flee bad relationships with little more than what they can stuff into an overnight bag.

Managing to find part-time work as a maid to help her qualify for a range of benefits that come with strings and conditions, Alex spends much of her time one breath away from complete destitution, sleeping with her daughter in her car and, at one point, on the floor of a ferry terminal.

Cleverly devised captions show her desperate text exchanges and her financial status, which barely holds above zero as everyday expenses eat into the pittance she makes as a cleaner.

Struggling to maintain custody of Maddy, she finds a great enemy in the law, which readily casts judgment on her value as a mother and her claims that she has actually been abused.

There are no easy answers, caricatures or villains in the richly nuanced world of grey Alex inhabits, and she is deeply flawed; her noble efforts to protect Maddy and earn a decent living are often countered by poor decisions and short-sightedness.

From her deadbeat mum Paula (Andie MacDowell, Margaret Qualley’s real mother), the help is a tad more erratic. A ganja-loving free spirit with bad taste in men and no head for finances – she rents her house out while living in a trailer – she is flaky, air-headed and unreliable.

With her father Hank (Billy Burke) there are hefty offers of support, yet dark memories from the past taint his gestures of generosity.

A raft of intriguing, genuinely challenging themes drive the drama of Maid, all of them humanizing complex emotional situations that are too often portrayed in black-and-white terms.

Coursing through Alex’s experience is the issue of women getting back into relationships with men who have abused them.

It is a tough topic the series handles delicately and intelligently by raising questions about judgement, forgiveness and redemption.

For instance, we see in Sean a troubled man trying to win back his family. He is an alcoholic, prone to violence when drunk. Yet he is never reduced to being an easily dismissible brute. You wish he would be, but Maid bravely denies such convenient comfort.

Alex is forced to face the possibility that such a man is capable of change. Would trusting him to make up for past sins and prove his commitment to a new life be an act of compassion? Or stupidity?

Whatever the case, Sean is presented as a three-dimensional human with real concerns and a haunting backstory. The complexity and moral ambivalence we see in him exists in all the characters.

Alex’s friend Nate is another case. Do his generous offers of support come with caveats? And what about her father Hank, who has had two children with a much younger woman? Can Alex look past the shadows of their history to see a better person? Or does there have to be a hidden agenda lurking somewhere? Perhaps there is. Perhaps she’s paranoid.

Lots of hard questions, no pre-packaged answers in Maid. And always there’s the terrifying, ever-present threat of homelessness for Alex and Maddy.

Created by Molly Smith Metzler, the series is based on the memoir Maid: Hard Work, Low Pay, and a Mother’s Will to Survive by Stephanie Land, who served as an executive producer with Metzler, John Wells and Margot Robbie.

Sometimes when you get a mix of directors working across a series quality and style can be erratic, but that’s truly not the case here; Maid has a beautifully modulated, organic flow, the cinematography by Quyen Tran, Guy Godfree and Vincent De Paula making great use of handheld cameras and natural light.

It’s no revelation that Margaret Qualley is so damned terrific as Alex. We’ve already seen how good she is in Once Upon a Time in Hollywood and My Salinger Year. Still, here she absolutely gleams, her wide, expressive eyes and signature style – she likes to nod and insert strategic pauses while delivering dialogue – conveying a broad palette of emotion in an outstanding marathon performance.

In an equally challenging role, Nick Robinson gives heart to Sean, a character we would otherwise find easy to despise, even hate were it not for the show’s steadfast refusal to stereotype him as a white trash loser. You really sense Alex’s feelings for him changing, though the understanding does not automatically entail approval.

Most impressive, Raymond Ablack positively shines as Nate, the enormously helpful friend who finds his sweet nature ensnaring him in an emotional tangle when Alex’s behaviour puts his personal integrity on the line.

Not that Maid is all doom and gloom. While there are many well-judged scenes showing Alex struggling to make ends meet – she begs people for money; is caught short at the supermarket; relies on lifts to get around – there are also some deft touches of levity designed to show what’s going through her head.

The best of these is one golden courtroom scene where a barrage of legalese has her hearing the word “legal” repeated over and over. Equally funny and poignant is when a wad of forms she needs to fill out are seen to have headings mocking her desperate situation.

Whether Maid can – or should – be seen as a #metoo drama is debatable. While the show certainly lays bare the plight of women escaping domestic violence, it refuses to castigate, categorise, condemn or demonize anybody, a practice common in much #metoo discourse.

Still, if the #metoo movement embraces a higher purpose calling for compassion, consideration, understanding, respect and support for abused women without the automatic derogation of an entire gender, then perhaps Maid could be seen as a high-end #metoo drama. One that looks beyond #metoo clichés to a deeper truth.

No surprise, then, that along with all its other qualities, Maid certainly qualifies as a great conversation starter, bringing to light a range of topics and issues long overdue for the kind of air Alex seeks for herself and her daughter.