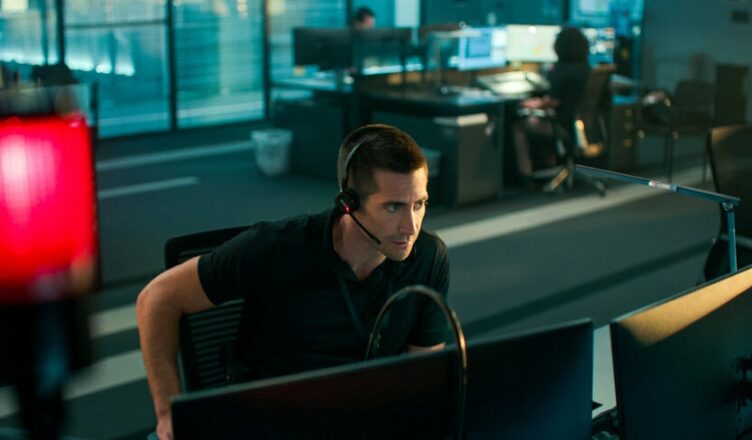 THE GUILTY **1/2 (90 minutes) M
As a demoted Los Angeles cop working the emergency phone lines the night before a court hearing that could end his career, Jake Gyllenhaal does a fine job holding together what is essentially a one-man film.

Dealing with various emergencies and not getting on very well with his colleagues, Gyllenhaal’s Joe Baylor becomes fixated on one complicated scenario involving a kidnapping and children left at home alone.

The ferocious bushfires raging on the rim of LA shimmer on giant screens in the background, giving the piece a suitably oppressive feel as Baylor gets increasingly frustrated and frantic trying to understand and resolve the situation before it ends in violence.

Playing like a high-end arthouse film, director Antoine Fuqua – best known for large-scale action films such as Training Day, Shooter, Olympus Has Fallen and The Equalizer – maintains a reasonably tight grip on our attention thanks chiefly to Gyllenhaal’s convincingly sweaty, fevered performance, which has the maniacal edge we saw in Nightcrawler, only dialled up.

The impressive cast voicing the people on the other end of the phone include Peter Sarsgaard, Ethan Hawke, Paul Dano and comedian Bill Burr. That’s quite a line-up, given they’re kept out of view.

There are moments when you wish for a cut to the action on the road, and one does wonder how a cop as highly strung as Gyllenhaal’s would be allowed anywhere near an emergency call line. You need to be a bit calm for that sort of duty, don’t you?

Still, The Guilty is not a bad little number, underscored by glossy, claustrophobic cinematography highlighting the hothouse atmosphere charged by crisis upon crisis.

And the final moments do deliver a sting as we discover what it is that is rattling inside the guy’s head.

Shot in 11 days on a relatively small budget, The Guilty is a remake of the 2018 Danish film, with Gyllenhaal also producing.