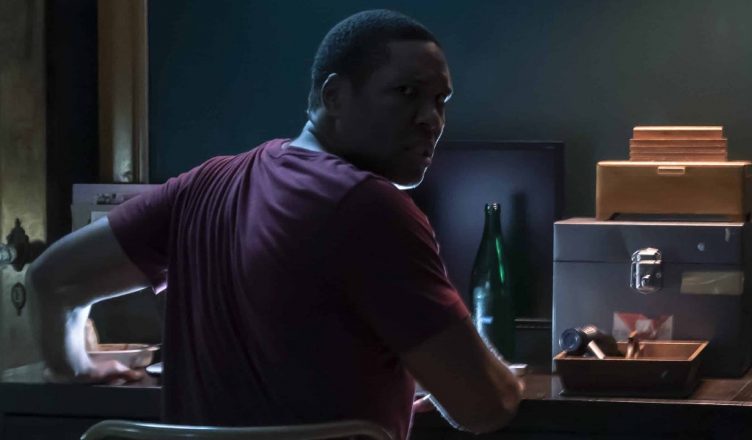 Who’s there?: An agoraphobic vlogger has some surprise visitors in ‘Night’s End’.

Two prime examples here of low-end horror films with strong premises that fall back on standard horror conventions once they run dry of fresh ideas.

In Night’s End we have a fairly intriguing premise involving financially strapped agoraphobic Ken Barber (Geno Walker). He’s papered over the windows of his dingy abode and is trying to live through his computer by posting videos.

After something “creepy” occurs in the background of one of his posts without him knowing – something falls off a shelf – he is encouraged to capitalize on it with the hope of getting enough views to earn money.

There’s lots of YouTube-speak about video compilations, viewership, comments, monetization and so forth as Ken gets “professional” help about the odd, otherworldly occurrences in his home, possibly relating to dark events in the house’s history.

Despite early promise and a committed performance by Walker, the film stubbornly sticks to its visually dull string of computer screen conversations, resorting to some bargain basement schlock for its rather silly payoff.

Michael Shannon is the only name actor here, appearing as a supporting character. Heaven knows why.

It’s a low-budget, low-flying horror effort strictly for those who scare easily and are very forgiving about the license such films take with the concept of paying “homage” to their obvious influences.

With Broadcast Signal Intrusion we have a slightly more intriguing set up that indulges the curious,ly widespread nostalgia for pre-digital analogue technology.

Set in 1999 just as digital was beginning to take over, video technician James (Harry Shum Jr from Glee and Crazy Rich Asians) has the labourious task of transferring a load of archived news video cassettes onto disks.

A moderately interesting follow-the-clues mystery ensues; James’ determination to find out what went on, where it happened and why coughs up an OK horror cocktail, with a final reel that tries ever-so-hard to deliver something ugly and confronting, which, of course is what we all wish for from horror films.

Predictability prevents it from really paying off, but as with Night’s End undemanding fans of the genre of a mind to eagerly buy into even the slightest fright should be happy.

Night’s End is available on Shudder; Broadcast Signal Intrusion is on AppleTV, Microsoft Store and Google Play for rental and purchase.