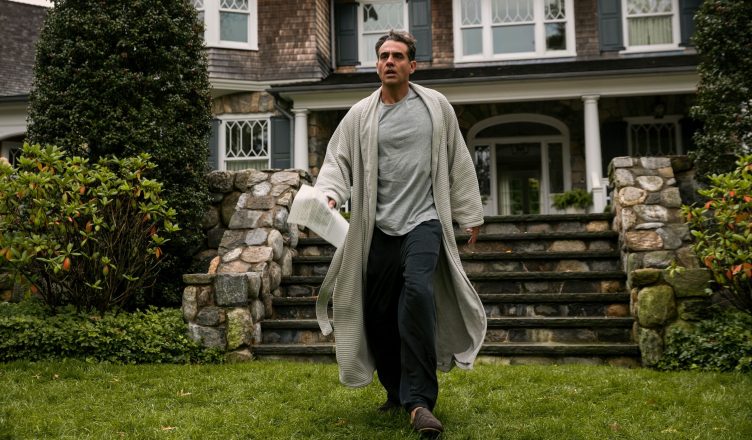 Miscast: Bobby Cannavale as a harried homeowner in ‘The Watcher’.

Yell from the rooftops as loudly as you like how it’s supposedly based on true events, it doesn’t make the The Watcher any more believable, or keep it from unspooling as an exceedingly bad, boring, overlong serving of D-grade mystery “thriller” that suffers from terrible direction and some pretty soggy performances.

In a major mid-life move, New York couple Nora (Naomi Watts) and Dean Brannock (Bobby Cannavale) move their family from the crime and noise of the city to the tranquillity and relative safety of Westfield New Jersey, which claims a low crime rate and picture-perfect houses.

They can’t afford the huge, beautiful house they move into, but they buy it all the same, hoping Nora’s prospects as an artist and Dean’s position at work will pan out nicely and put them afloat.

Unfortunately, their dream of happy living in suburbia is derailed by several factors, not the least of which being that they are surrounded by America’s creepiest collection of upper middle-class neighbours.

These include the ones across the road who love trespassing; an old dude who keeps entering the house and even their dumb waiter; and, perhaps scariest of all, there’s a preservation activist played by a post-facework Mia Farrow.

On top of all this, they start getting ominous, vaguely threatening letters from someone called “The Watcher” who, like everybody else – including Nora’s old friend and real estate agent Karen (Jennifer Coolidge) – is totally obsessed with the house.

To protect the family, and suddenly forgetting that they’re supposed to be strapped for cash, Dean decides to install an expensive security system including an array of cameras that surround the house.

But guess what? While he’s happy to spend $7000 on this surveillance, it never occurs to him or anyone else to spend an extra $100 and put a camera on the friggin’ mail box.

That’s just one of many ludicrous story holes peppered throughout the dull, drawn-out investigation to track down who “The Watcher” is.

Sloppily executed with some very poor production values – Nora and Karen meet many times, but always at the same restaurant at the same table – the show is further hobbled by a host of ludicrous “twists” and an underlying confusion as to what the show is supposed to be.

Though it’s presumably meant to be building tension and mystery about what’s going on, there’s all this half-hearted levity in the direction with sitcom-level performances grinding against any sense of believability or suspense.

Perhaps in an attempt to liven things up, the characters are in the habit of making all these off-hand comments that sound like improvised gags, but that invariably fall flat.

Consequently, for much of its inordinate length The Watcher plays like a failed comedy.

The acting feels persistently off-key, the main culprit being Bobby Cannavale, a very talented and versatile actor who – hard as it is to say – appears to have been miscast. He just doesn’t project the gravitas required.

Worst of all, The Watcher contains a surprise ending that is not surprising at all. If you endure the show from start to finish, you may find yourself resisting the powerful urge to lob a vase at the screen. Please don’t do that, don’t destroy your TV.

If the show’s so terrible, if it’s such a waste of time, why would a reviewer sit through it all?

Chiefly, so you don’t have to.

As with many other mediocre streaming shows – Inventing Anna; The Lazarus Project – there comes that point where you have to decide whether it’s worth going on.

On the one hand, you’ve got the powerful argument that there are more valuable and interesting things you could be doing with your time (as was the case with Anna and Lazarus.)

On the other, with hours already invested in an unrewarding show, you carry on in the hope that things will improve.

That didn’t happen here, but that’s the price you pay for being an old-school reviewer who has to see things to the bitter end before rubbishing them. And The Watcher is rubbish. It’s five and a half hours you’ll never get back.

A stinging irony is how this stinker comes from Ryan Murphy and Ian Brennan, who just gave us the excellent Dahmer series. They shared directing credits here with Paris Barclay and Jennifer Lynch, who also worked on Dahmer.

Just goes to show how quickly you can go from good to bad. Go figure.

Footnote: How distressing it’s been to see how much acritical media coverage The Watcher has received, mainly because of its “true life” backstory and star cast. That’s long been part-and-parcel of entertainment “reporting” but, dare one say, it’s become far more common since the advent of streaming. Just saying.