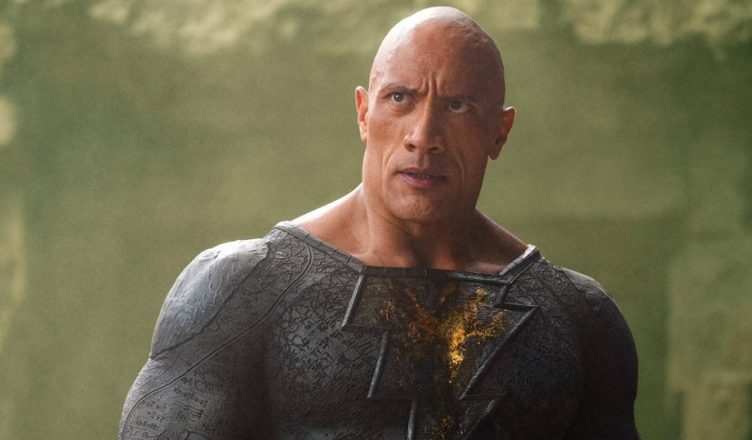 BLACK ADAM **1/2 (125 minutes) M
A wry, knowing little smile briefly graces the face of Dwayne Johnson at a key point during his largely non-smiling performance in Black Adam. We know what that’s about.

The Rock has just planted his flag in yet another movie franchise. There’s a lot to smile about.

So you’d think his performance might be a little more enthusiastic as the 5000-year-old super-powered Black Adam.

Alas, counter to his string of colourful turns in recent films – Jumanji; Fighting With My Family; Skyscraper; Jungle Cruise, etc – Dwayne is rather bland in Black Adam, either stoically stone-faced or growling with eye-whitening rage. Remember him in The Scorpion King (2002)? Same thing, more or less.

In Black Adam Johnson plays a super-powered being who is brought out of a 5000-year hibernation in the city of Kahndaq, which is in need of a hero to free it from the tyranny of a criminal gang.

Thinking his presence might be a bad thing, Black Adam is forced to cross swords with the four super-powered members of The Justice Society, headed by Dr Fate (Pierce Brosnan) who gets his powers from a magical helmet.

Note also that distinguishing between these two superhero brands is apparently very important, especially to the marvellously dedicated souls who dutifully file in by the million to see these films, even though the films themselves are often indistinguishable from each other. Indeed – and how blasphemous it is to declare in public – if you were told Black Adam was a Marvel film, you wouldn’t blink.

Why The Justice Society deem Black Adam to be a bad egg isn’t really made clear as all he does after he wakes up is defend himself against machine-gunning criminals.

Anywho, they form an alliance to protect the good people of Kahndaq from Sabbac (Marwan Kenzari), head of the crime outfit Intergang (really? That’s the best name they could come up with?) He wants to get hold of the all-powerful crown, which was acquired by professor Adriana Tomaz (Sarah Shahi) when she woke Black Adam up. So, for good measure, Sabbac has acquired her son as a bargaining ploy. So that’s added motive.

In strict accordance with Superhero Movie Law, Black Adam is replete with lashings of ultra-loud big-screen action – especially eye-blasting when seen in Imax – all executed with standard proficiency.

Yet for all the scale and obvious expense, Black Adam serves up the all-too-usual serving of same-same spectacle; there’s plenty of flash and dazzle, an edit every 2-3 seconds, loads of blossoming fireballs and explosions filling the screen with flying rubble.

As for how Black Adam shapes up as a central figure: the dude can fly, move at super speed, is impervious to bullets, rockets, explosions and any reasonable demand for him to emote.

He’s indestructible in every conceivable way, so in terms of how he fits into the superhero pantheon, his god-like powers place him a little on the dull side. He might technically be human, but he doesn’t seem all that relatable.

Perhaps he can learn something about appealing to regular people from Batman in the sequel that will inevitably come, save for the unlikely scenario that the global saturation marketing campaign that has been pushing the film into every available eyeball in the past two months somehow misses the mark and the film founders.

So while Black Adam is passable and reasonably diverting, if unexceptional and a bit too same-same, it’s well-made multiplex mulch that does what it says on the box: draw the crowds in on opening weekend, keep them sufficiently entertained with the usual flurry of VFX, saturate them with action and leave them smiling with a nicely placed tease for a sequel.

Working with a $200 million budget, director Jaume Collet-Serra (OrphanJungle Cruise; The Shallows) delivers precisely what’s expected. There’s no messing with the template, so if you’re looking for a different type of superhero adventure, you won’t find it here.

To its credit, the actual running time of the film clocks in at a comparatively brief 113 minutes, sans credits – but be sure to stay for them for the usual “surprise” treat.