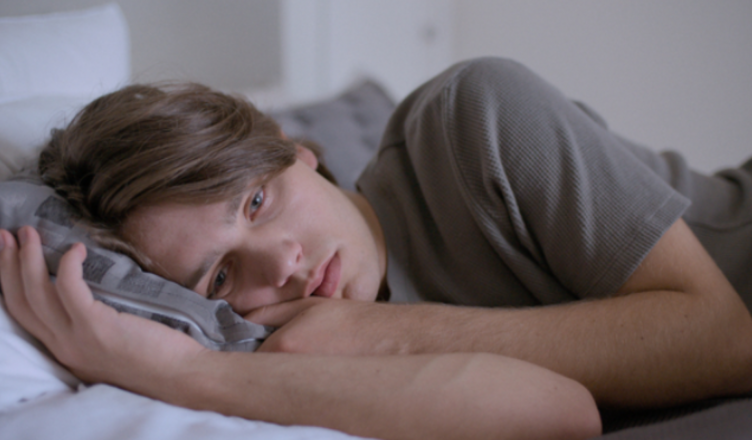 Sad sack: Jordan Dulieu plays a troubled teen in the drama ‘Everything in Between’.

EVERYTHING IN BETWEEN * (90 minutes) M
If only good intentions and noble themes were enough to make a good film.

In the low-budget Australian drama Everything in Between, suicidal teen Jason (Jordan Dulieu) meets American drifter Liz (Freyja Benjamin), a Zen-loving young lass whom he brings home, a plush Sydney mansion where mum (Gigi Edgley) and dad (Martin Crewes) are at loggerheads with each other and with how best to cope with their taciturn son’s many issues.

As the two draw close it’s obvious there’s a lot of heart in the film, directed by feature first-timer Nadi Sha O(co-writing with Grant Osborn, but the pace is glacial, the tone morbid, the characterizations wafer-thin.

Dad comes off as a sort of new-fashioned ocker stereotype; mum is a wine sipping shrew; Liz has no real backstory; Jason remains an enigma. As for Linda (Esther Anderson), the secretary dad is boffing, she is literally forgotten about.

The performances are stilted, largely unconvincing and, sad to say, largely uninteresting. Yet the end credits lists the presence of a “dramaturg” (Benjamin Mathews, who also plays a doctor in the film), continuing the decades-long mystery as to what a “dramaturg” does.

The patchy story charting the relationship between Jason and Liz and some pretty dire, exposition-heavy dialogue suggest the film relied on a screenwriter’s notepad rather than a polished screenplay. That’s a guess, of course, but some of the exchanges between Jason’s mum and dad are pretty hard on the ear.

Example: at one point Jason’s state of mind finds expression in a line of falling dominoes. It must have taken many hours to set up, but it just pops up out of nowhere. How’s that?

We are also graced with a highly improbable escape from a hospital aided by one of those cosmically incompetent security guards you only ever see in movies. He’s worse than useless and apparently doesn’t know how to use a telephone.

Same applies to the facility’s staff. Seriously, did nobody notice during the table read?

It doesn’t help that during a bonding scene between Jason and Liz we get a glaring continuity error that takes you right out of the picture. Aren’t there ways to edit around such obvious flubs?

As with too many Australian films, Everything in Between has no third act, so even if you forgive all the film’s faults you still end up with an unresolved story.

Watching the hundreds listed in the long end credit scroll, it’s truly heart-breaking that all this effort went into the service of a sluggish, drab story with so little emotional resonance or sense of conviction.

And dealing with issues such as depression doesn’t mean the film itself has to be so depressing, surely.