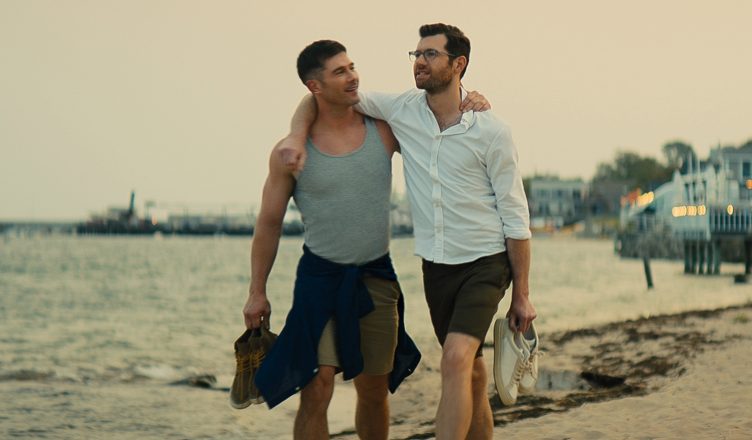 Happy together: Billy Eichner and Luke Macfarlane in the rom-com ‘Bros’.

BROS **1/2 (115 minutes) MA
Fitting squarely into the Noble Attempt category comes Bros, a romantic comedy about a gay guy looking for love in New York as he tries negotiating his way through a world of gender politics and dating protocols.

Hungry for a meaningful relationship, Bobby Lieber (Billy Eichner from Parks and Recreation) hooks up with the hunky Aaron Shepard (Luke Macfarlane) but finds it tough going, even though they break one of the cardinal rules of rom coms by falling into bed fairly promptly.

Bobby is also a podcaster and curator of a new museum dedicated to LGBTetc history, which is struggling for funds to launch. He’s a loudmouth and highly opinionated, putting him at odds with friends and colleagues, even as they’re trying to help.

Directed by Nick Stoller (Forgetting Sarah Marshall), who co-wrote the screenplay with Eichner, Bros is a fairly funny comedy hampered by a cluttered story that suffers from self-importance and overreach.

Heralded loudly, and inaccurately, as the first gay rom-com to get the backing of a major studio – In & Out did that with Paramount way back in 1997 (see below) – Bros often seems too self-conscious, cramming in a myriad of bullet points about gay culture, gender identity, sexual politics, coming out, representation and a raft of other topics. Indeed, the film sort of resembles a podcast, full of talking points but with little structure.

While individual scenes are often quite amusing – the opening is killer, the Debra Messing scene hilarious – the film struggles to come together, despite impressive performances from the leads; an example of a film being less than the sum of its parts.

Though Universal deserves kudos for putting its heft behind the film, dreams of it having wide appeal have foundered.

The film has been greeted with great favour with most critics, yet has bombed quite resolutely at the box office.

Consequently, there has been much pondering about why straights, gays and everybody in between didn’t flock to the multiplexes in support of such a ground-breaking film.

An early scene in the film sees Bobby discussing with a studio exec how best to fashion a gay rom-com for a wide audience. It’s meant to be a lampoon of how movie execs think and what mainstream audiences expect yet, ironically, it’s stuff the filmmakers behind

The characters in Bros largely exist inside a gay bubble, having very little meaningful contact with those outside the community. It’s very much an us/them scenario that in terms of drama makes things a bit insular and somewhat dull. Well, not dull, exactly, but too easy.

For instance, Bobby’s search for key museum financing takes him to a big-time producer, an outrageous gay caricature who is happy to shovel over millions with a few strings attached. Might it not have been more interesting for Bobby to confront a potential benefactor who wasn’t gay and needed some persuasion?

Then there’s the explicit content of Bros. Filling a rom-com with so much adult content is risky enough, yet Bros takes it a step further.

The high quotient of sex and beefcake seems designed to cater to a gay audience. There are lots of topless dudes in the film – nothing wrong with that – but combined with all the nakedness and nookie and talk of group sex, Bros could leave mainstream filmgoers cold.

The movie’s poster also doesn’t suggest a mainstream film, with a faceless shot of two guys grabbing each other’s bottoms. To be honest, it looks like something you’d see at a queer film festival. So probably a big turn-off factor there.

The manner in which the film engages with gender identity is awkward and clumsy, throwing around terms such as “cis” and “heteronormative” and so forth as though they are part of everyday vernacular, which they aren’t. They’re agenda-driven terms found in commentary pieces that many humans either don’t get or resent.

Then there’s the trouble with Bobby, who, as some characters in the film point out, is not a very likeable chap for a lot of the time. He’s funny all right but often hard to warm to, armed as he is with a forceful personality that can be quite obnoxious.

To wit: in one scene he refuses to stop arguing with Aaron’s mother (Amanda Bearse) about teaching sexual politics and gender identity to young kids in school.

Brave brave brave for the film to take on such a contentious ball of barbed wire in a rom-com but it’s a highly divisive topic that sits uncomfortably in the heartland.

And even though Bobby is castigated for being so rude as to bring it up at what was supposed to be a pleasant gathering, the film does ultimately declare its position on the issue.

Again, a courageous move but not precisely the type of thing to endear a film to a wide audience.

For an instructive comparison about how to do a gay rom-com well, check out the terrific Netflix series Uncoupled, created by Darren Star (Sex and the City) and starring Sean Patrick Harris.

It’s a very funny series set in the upper tier of New York’s gay community that keeps focus on its main character’s quest for love after being dumped from a long-term relationship.

And how great it is to see the 1997 comedy In & Out popping up on Stan. Directed by Frank Oz and starring Kevin Kline, the hit film from Paramount has a much more substantial claim than Bros to being a ground-breaking gay comedy from a major studio.

It certainly renders as stupid any suggestion that the box-office failure of Bros is due to “homophobia”, as Eichner himself has unwisely implied.