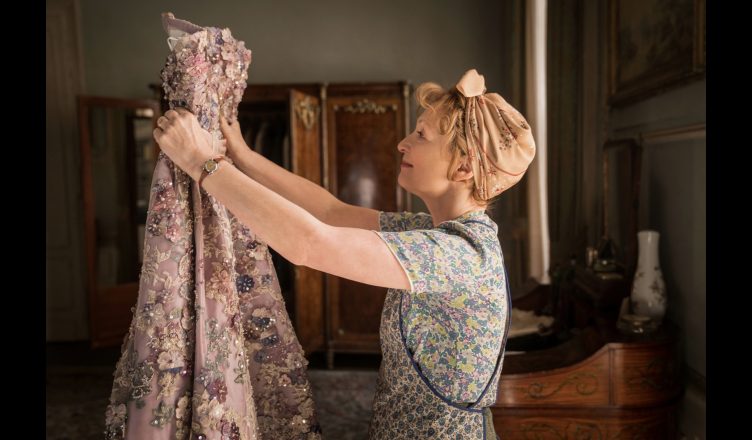 Me and my dress: Lesley Manville in ‘Mrs Harris Goes to Paris’.

MRS HARRIS GOES TO PARIS ** (116 minutes) PG
There’s no quibble that the ultra-light, feel-good nostalgia trip offered in Mrs Harris Goes to Paris has its charms, yet those charms are thinly spread over an overly generous running time, its slow direction stretching what should have been a sweet Eailing-style dramedy about small-time dreams and class into a bit of a slog.

It’s a common complaint that so many films today – especially those that debut in the stream – are too long by about 20-30 minutes. Mrs Harris is a prime example.

Set in 1957 London, lowly but proud cleaning woman and war widow Ada Harris (Lesley Manville) dreams of owning a Dior dress and is determined to scrap and save every penny so she can fly to Paris and get it.

Encouraged by her chatty, life-loving friend Vi (Ellen Thomas) and gunned by her naivety about the fashion world, Ava manages to crash an exclusive showing at Dior HQ.

Full of loud working-class bluster, she is received with overt contempt from Dior boss Claudine Colbert (Isabelle Huppert, now 69 and apparently ageless) and with a sprinkling of awe from the models and seamstresses who seem chuffed that somebody other than the usual rich, stuck-up clientele have turned up.

Ava especially catches the attention of Dior number cruncher André (Lucas Bravo), who is inspired by her brash manner and desire for high-end elegance to formulate a daring solution to Dior’s financial woes.

There’s no carping with the lovely performance Lesley Manville (Another Year; Phantom Thread) registers, which radiates warmth and a congenial defiance against being judged for her class and refusal to accept the post-war middle-aged drudgery she is expected to accept.

The rest of the cast offer good support, especially Jason Isaacs (Harry PotterMrs Harris Goes to Paris But Doesn’t See Much Of It.

Certainly, those in the mood for a lie back before a pleasant, undemanding old-style comedy-drama should respond to the film’s charms, as have most of the world’s film reviewers, apparently.