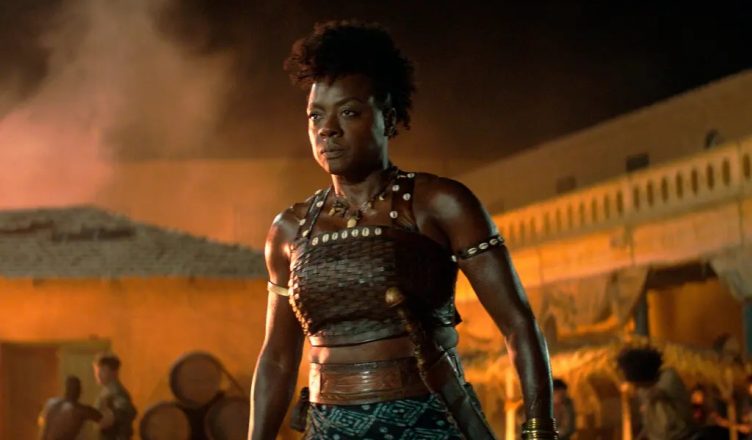 Battle-ready: Viola Davis as an Amazon warrior in ‘The Woman King’.

THE WOMAN KING ** (135 minutes) M
All hail Viola Davis for at least looking the part of the two-dimensional General Nanisca, the fierce, no-nonsense, non-smiling leader of the all-female army devoted to defending their African kingdom of Dahomey in the 1800s.

With stern-faced gravitas and a taste for cutting implements, she trains an Amazon squad of women (based on the real Agojie warriors), preparing them for battle against rival tribes and white slave traders.

As the central figure in this massively overrated, low-end epic, Davis puts in a performance of rock-solid resolution that no amount of melodrama can crack – not even when she suspects a personal connection with one of her new recruits.

When it comes to chopping her way through the enemy, she’s certainly got what it takes. When it comes to relating to another person in a way that’s meant to sell her as anything more than a noble cliche, not so much. Davis has long proved what a great actress she is. Just not here.

Directed with wavering degrees of focus by Gina Prince-Bythewood – who made the wonderful romantic drama Love & Basketball and the solid action film The Old Guard – the film spends a lot of time showing the splendidly lithe warriors in rigourous training or glorious battle, glistening with massage oil, dispatching their foes with relative ease.

Not enough time is spent sorting out the muddled story, which somehow posits the king of Dahomey (John Boyega) as a progressive hero because he wants to transition away from selling slaves to selling produce. What a guy. It’s a tough sell, made all the tougher by some soapbox speechifying and dialogue. God bless Boyega, but his royal presence here is stolid and rather average.

Despite the moral murkiness of the Dahomey slave trade, the film sets this thorny story point aside to squarely frame the big battles as being between the righteous, flawlessly athletic Dahomey warriors and the white slave traders who aren’t very good fighters and whose transport ships sit off the coast, waiting to take them back where they belong once they’ve had their asses kicked.

For all its claims of being an epic film, The Woman King is blighted by some pretty ordinary cinematography. The exposure levels appear to bounce all over the place, despite the widescreen ratio and the vast South African landscape there’s no real feeling of scale, with many scenes lacking sweep and depth. There’s also a bewildering preponderance of close and medium shots, just like in a TV show.

According to The Hollywood Reporter “In her meetings with the studio, Prince-Bythewood referenced epic films like Braveheart, Gladiator and The Last of the Mohicans“.

Unkind as it may be to say, this is not something you could deduce from watching the film. Bluntly put, there is not one sequence in The Woman King that is comparable in scale or power to anything in any of those three films – or in many other modern-day epics.

The messy battle scenes look as though they were edited in a blender with the warriors belting out high-pitched war cries as they leap into the air, their bodies gleaming with body oil, their blades slicing down on their colonial adversaries who can never quite fire their muskets in time.

There are plenty of close shots and lots of rapid cutting, but no sense of a real life-and-death fight with high stakes. The warriors are always the easy winners. A bit naf, that.

The film was produced and co-written (with Dana Stevens) by Maria Bello, the veteran American actress best known for her roles in such films as The Cooler, Grown Ups, Prisoners and Coyote Ugly.

Kudos to her for breaking out of the box and for pursuing the project with Viola Davis and Prince-Bythewood, who faced many rejections and pressure to compromise their vision. The backstory about the production is quite impressive.

Yet it is important not keep separate the championing of their fortitude and creative integrity with an honest response to The Woman King.

When a film receives such overwhelming critical praise, it is so easy to play safe, kick with the wind and just go along with what has been said.

It’s also tempting to reflect the film’s values with a glowing review. The Woman King, quite rightly, deserves applause for what it does for the cinematic representation of women of colour, the portrayal of black history and its condemnation of slavery (mixed though that is).

Noble as all that is, it doesn’t automatically make for a particularly good film. It’s as though The Woman King is a film you’re supposed to admire, never mind its obvious shortcomings or your better judgment.

To be fair, the film has enjoyed some box office success; it’s taken about $US85 million so far since its 16 September release, which, given its $US50m budget, isn’t bad at all and augers well for its leap into the stream.