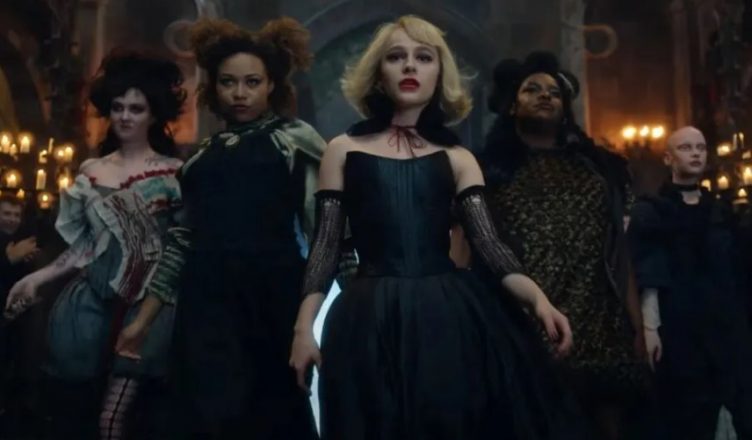 THE SCHOOL FOR GOOD AND EVIL *** (146 minutes) M
In what is likely to be the most beautiful thing to hit the stream all year, this visually sumptuous comedy-fantasy from director Paul Fieg (Bridesmaids; Spy; A Simple Favour) takes us to a highly recognizable fantasy realm – thank you, Harry Potter – where two stupendously designed schools sit opposite each other, joined across a ravine by a very attractive walkway. One trains good characters for fairy tales, the other bad.

Into these schools are deposited two friends, magically transported from their village where neither of them is having a great time. This is at the request of Sophie (Sophia Anne Caruso), who wants to become a fairy tale princess, complete with the package deal that entails.

As luck would have it, Sophie is unceremoniously airdropped into the School for Evil while her reluctant bestie Agatha (Sofia Wylie) finds herself in the School for Good, despite accusations back home that she’s a witch.

With Sophie eager to be transferred to the other school and Agatha fighting to save Sophie’s soul from the temptations of the power evil can bestow – thank you Star Wars – there’s perhaps too many competing storylines going on as we’re inundated with characters and subplots, all supervised by Dean of Good (Kerry Washington), Dean of Evil (Charlize Theron) and Dean of Everything (Laurence Fishburne). And in case that’s not enough A-list talent for you, the whole shebang is narrated by Cate Blanchett.

With so much storytelling clutter to get through it’s a while before the actual point of the yarn comes to the fore as the girls’ friendship comes under a series of extreme stress tests.

Still, it’s very difficult to complain because of how downright gorgeous The School for Good and Evil is, its sensational, pastel-coloured costumes, the grandeur of its epic set-design and the dazzling state-of-the-art wizardry of its visual effects giving the soiree, based on the 2013 novel by Soman Chainani, a real sense of magic.

Of course, the film is a clear case of style over substance, something you’re never supposed to encourage or admire. But what the Hell.
Netflix

Nicely mounted and unashamedly cheeky, the jape manages to rework one of the greatest romantic tragedies of all time into a teen love story that’s a little more upbeat and kinder to its peppy protagonists. Based on Rebecca Serle’s 2012 novel When You Were Mine.
Disney+

MEMORY *** (113 minutes) MA
An above-average Liam Neeson action piece – which is saying something given some of his recent efforts (Blacklight; Honest Thief) – finds our favourite latter-age man of action as an assassin who refuses, at the moment of truth, to kill a child.

While dealing with the consequences of such a risky career move – the Mexican drug cartel ain’t very happy – and his encroaching dementia, a clutch of detectives, led by a very gruff, determined dude (Guy Pearce) are on the trail.

Her family is living well beyond their means so her hapless father Lord Rollo (Andrew Scott), leaps upon the quick, sure-fire solution of hitching Birdy to a sufficiently wealthy man, whatever his age or decrepitude, in return for financial security and possibly his title.

Forced marriage is just one of a host of teen-related issues Dunham breezily deals with in an engaging historical comedy, set in the 13th century, based on the 1994 Karen Cushman novel and buoyed no end by Ramsey’s energetic central performance.

Though things obviously weren’t as clean in medieval England as seen here, it’s a handsomely mounted piece with just the right amount of dramatic bite to make the story sing.

Kudos, too, for such an obviously low-budget endeavour looking so handsome. According to the impeccable Wikipedia, much of the film’s location shooting took place in the environs of Stokesay Castle in Shropshire, a lovingly maintained historical estate that, like so much of historical Britain that star in so much film and TV, is heritage listed.
Prime

Letting down their hair for a night, they party so hard Beth wakes up next morning with a sore head and – guess what? – a missing roommate.

Increasingly stressed, Beth tries piecing together the increasingly complex picture of what has happened, and what is happening, with a helpful local cabbie Zain (Ziad Bakri) and the less-than-helpful local authorities.

Not a bad little number, this, well-directed to the genre template by Farrant and with an excellent supporting performance by Luke Norris as Beth’s husband Rob. His scene on the phone is a mini-masterclass in emotionally authentic acting.
Netflix