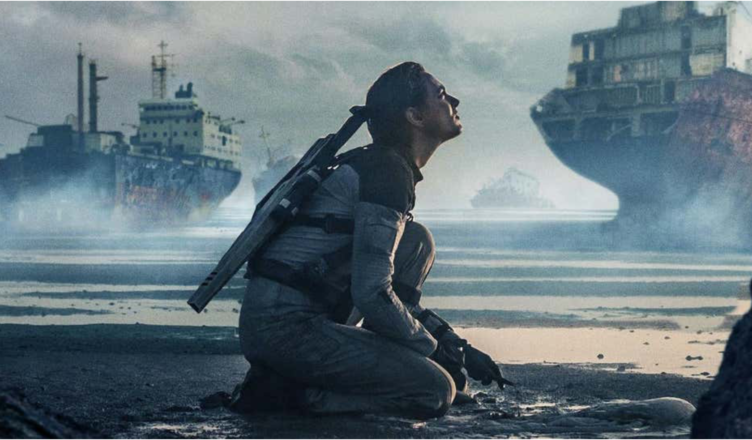 Return home: Nora Arnezeder is trapped on a desolate Earth in ‘The Colony’.

THE COLONY *** (100 minutes) MA
Set on a post-apocalyptic Earth half-way between Mad Max and Waterworld comes a nifty sc-fi adventure that gives fresh visual polish to some well-worn ideas about rebuilding society from the ashes of the wasteland.

Descendants of those who abandoned Earth centuries earlier return to see if they can track down survivors of an earlier mission.

The original objective was to see if their former home had recovered sufficiently from all the damage inflicted by centuries of human excess. Seems that humanity’s temporary digs on a distant, arid, rocky planet called Kepler-209 aren’t all that swish, thus the desire to return home.

Alas, first impressions aren’t impressive. All that is left of civilization consists of raggedy, ill-tempered nomads living in the husks of giant ships that now sit with majestic poise on what appears to be a never-ending flat. (No surprise the film’s other title is Tides.)

And they’re an agro bunch, as expedition member Blake (Nora Arnezeder, from Army of the Dead) quickly discovers as she is dumped into a prison hole after being stripped of the tech gear she needs to communicate with her people.

Shrouded in a forever fog, the film’s look is strong on atmospherics, helped no end by apparently having free access to the creepy, labyrinthine interiors of decrepit warships.

While he can’t veil the inspirations drawn from the Mad Max movies or Aliens (hail Ripley), director/co-writer Tim Fehlbaum gets a gritty, convincing turn out of Arnezeder and keeps the story moving at a steady clip, especially when uncovering the true story behind the ruffians Blake encounters, and what their plans are for the future of their distressed Earth.