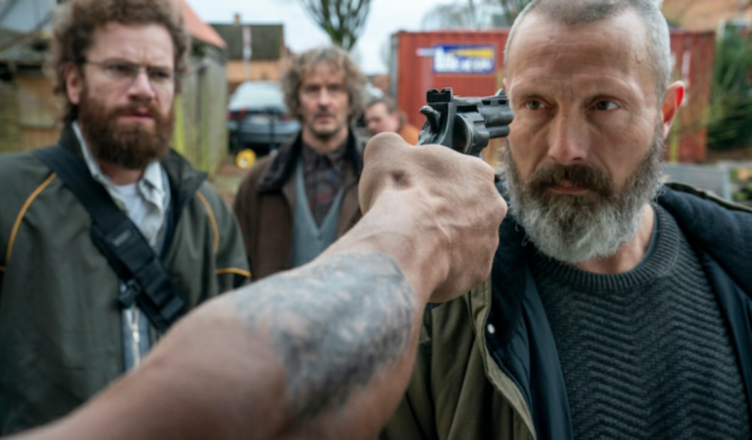 Unmoved: The ubiquitous Mads Mikkelsen and his colleagues in ‘Riders of Justice’.

RIDERS OF JUSTICE **** (116 minutes; subtitled) MA
The catastrophic reach of The Butterfly Effect – wherein a tiny event sets in train a string of cause and effect that can result in large-scale tragedy and disaster – sits at the boiling centre of Riders of Justice, a tremendously involving, attention-grabbing, decidedly off-beat Danish revenge drama that questions whether life is governed by coincidence or fate.

A moment beforehand he had given his seat to Emma (Anne Birgitte Lind), who was killed, leaving her daughter Mathilde (Andrea Heick Gadeberg). Also killed was a star witness in a high-profile case against the notorious Riders of Justice bikie gang, an event he can’t put down to coincidence.

With the hacking help of fellow tech heads laconic Lennart (Lars Brygmann) and Emmenthaler (Nicolas Bro), Otto carefully formulates a case that the accident was, in fact, a cleverly designed, cleverly disguised plan to assassinate the witness.

The fire for revenge is stoked when they take their highly persuasive evidence package to Emma’s grieving husband Markus (Mads Mikkelsen), a soldier called out of the field to deal with his loss and his traumatized daughter.

What unfurls is a tightly wound, superbly dispatched tale mixing black humour, emotional tension and bursts of cathartic violence; writer/director Anders Thomas Jensen locks you into the story within a few minutes and does not let go as he delivers a ripping story where surveillance technology is made to serve the impulse for payback.

The ubiquitous Mads Mikkelsen is as good as ever, sporting a beard and giving his angel of vengeance a soulful edge as he both deals with his troubled daughter while teaching his coterie of justice-seeking geeks how to operate automatic weapons.

Alongside the revenge narrative, Anders Thomas Jensen deftly beds in a pretty thoughtful theme regarding the operation of luck and coincidence in everyday life.

As one character explains to Mathilde, a complex network of small, random events lie behind such calamities, rendering senseless any attempt to make sense of them.

It’s not often we get a ripping revenge drama that delivers philosophical appetizers while also making good on its all-important duty to enthrall and entertain. So chalk Riders of Justice up as a rare treat that satisfies both sides of the ledger.