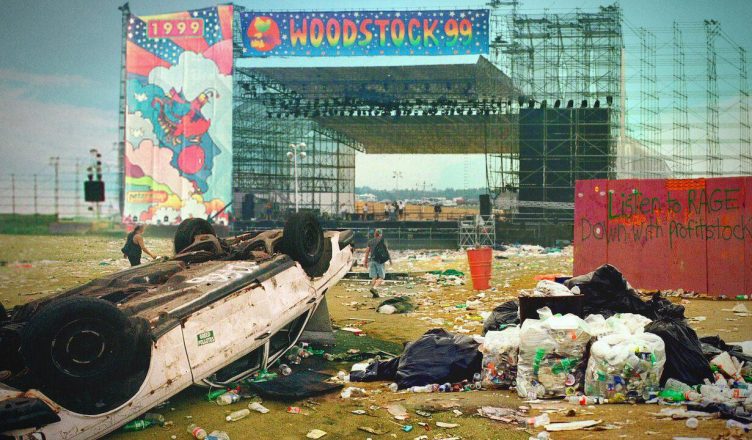 The party’s over: Part of the festival aftermath as detailed in ‘Trainwreck: Woodstock ’99’.

TRAINWRECK: WOODSTOCK ’99 ***1/2 (three episodes; 143 minutes) MA
There’s an unintentionally gross sequence in Trainwreck that provides a vivid, perfectly apt, rather disgusting visual expression to what the mismanagement of the mammoth Woodstock’99 music festival in Rome, New York had descended to.

Gleeful young revellers are seen playing in large puddles of mud, sliding around, rolling about, smearing themselves with it, all while laughing and having a good old time in an echo of the kind of mudplay that went on at the original rain-drenched Woodstock music festival in 1969.

The big difference is that the mud these funsters were slopping around in was partly composed of runoff from the nearby portable toilets, the capacities of which were greatly overwhelmed by the sheer volume of young festival goers.

Hence, these innocent, fun-loving kids were unwittingly engaging in something that the festival had itself become. Namely, a Shit Show.

As detailed in Trainwreck, the dunny disaster turned out to be the least of it.

Replete with archival footage from home video cameras and extensive news coverage, and with the willing participation of the organizers (including Woodstock creator Michael Lang, who died soon after being interviewed), the absorbing three-part documentary devotes an hour to each day of the festival, analyzing how the driving need to make a profit resulted in corner cutting that wrought catastrophic consequences.

It’s important to acknowledge how a lot of people had a grand time at Woodstock ’99, with one of the attendees saying as much, both then and now. Some remarkable footage show the heaving ocean of people enjoying the acts, but it’s the dark, disturbing underside of the festival the series journeys through.

As graphically illustrated throughout, a central problem involved the sheer lack of oversight and quality control with outsourced service providers.

Neglect of such a basic business principle resulted in layers of garbage covering the festival grounds (a huge decommissioned air force base), poor security, rampant drug dealing, price gouging ($4 for a bottle of water – in 1999!) and people baking in the hot sun.

Worse was how the organizers failed to read the huge crowd they had drawn, with bands such as Kid Rock, Limp Bizkit, the Chilli Peppers, Rage Against the Machine and Korn working the crowd into a frenzy that ultimately got out of control.

As the details of the final night calamity are picked over, the confessional nature of the interviews becomes clear. The organizers lament over what went wrong, and why, and are often frank about who at fault for creating the conditions that allowed the eruption of the fiery riot after the final act.

As an insight into crowd behaviour, Trainwreck provides some startling illustrations of mob mentality and how hundreds of thousands of people can appear to act as a single organism.

It also shows how the anonymity offered by a huge crowd can vapourize inhibitions, leading to violence, destruction and sexual assault.

Frustration is given as one of the chief reasons the crowd went wild, with pent-up anger over the mis-management of the event igniting when a rumoured “surprise finale” failed to materialize.

The presence of thousands of party-hard frat boys is also offered as greatly influencing the behavioural tone of the crowd, which saw young women molested and man-handled as they crowd surfed.

There’s a highly questionable suggestion that had the festival been held today, social media would have served as a release valve for a lot of that aggression. Hmm. A debatable point.

What’s beyond debate is that bad management and a clear lack of foresight invites such disasters, as we saw in November last year with the Astroworld concert in Houston, which claimed 10 lives.

An excellent companion piece to Trainwreck is the feature-length 2019 documentary Fyre: The Greatest Party That Never Happened (***1/2; 97 minutes; M). It’s a truly blistering account of the monumental con job that was the 2017 Fyre Festival, with one gent admitting how far he was willing to go just to elicit a favour. Riveting stuff.