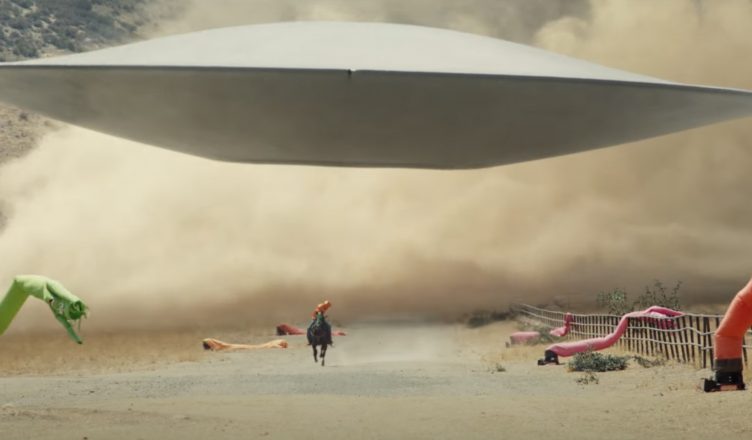 Don’t look up: A UFO harasses a horse ranch in ‘Nope’.

NOPE * (126 minutes) M
You’ve got to hand it to writer/director Jordan Peele. The guy is nothing if not efficient, for with Nope he accomplishes two things at once by delivering unto us what is unquestionably the most uninteresting alien movie ever while also tightening his grip on his standing as one of the world’s most overrated directors.

It’s main target, though, is a horse farm run by OJ (Daniel Kaluuya) and his feisty sister Em (Keke Palmer). It’s above their turf the extra-terrestrial whatever-it-is chooses to linger, “hiding” inside a cloud that remains stationary.

Having given us the reasonably engaging horror jaunt Get Out and the terrible Us, Peele here sets his sights on delivering a sci-fi thriller full of mystery and tension.

What is plopped before us on the screen, however, is a painfully slow, mind-numbingly dull film with so many story holes and lapses in logic one has to wonder whether any member of Peele’s creative team had the stones to tell him when things in his turgid tale just weren’t making sense.

After a big of low-level mayhem, OJ and Em dedicate themselves, and an assortment of eccentric associates, to capturing the UFO on film, a tricky deal given how it shuts down everything electrical when it swoops down around the homestead.

It’s a lame and listless affair as Peele pits the film with longueurs that, presumably, are meant to generate tension but instead allow you too much time to think of how stupid and unoriginal the proceedings are getting and how little thought has gone into the telling.

An instance of this, and one of the many irritations in the film that defy common sense, is how the gradual loss of power as the alien nears results in the speed of voices and songs slowing down, even though it’s a digital signal. If the power cuts out the signal would simply stop, it wouldn’t slow down, the way it would with, say, a cassette player that was losing power.

It’s a maddening technical gaffe – and this from an A-list director?

The whole matter about how they manage to take photos and film of the UFO is similarly infuriating. Its proximity might shut down all electronic devices, yet the film itself shows us how easy it would be to get around that – yet, bizarrely, it never occurs to any of the characters how to do this. What idiots.

Yet Peele attracts fans who are keen to read great profundity into his work, with Nope being no exception. This defies rational explanation. He has a lot going – he wrote the fine Candyman remake – but there just aren’t enough runs on the board as yet.

As for Nope, one would have thought all the glaring narrative flubs would have invalidated any claim that the film was worthy of any deep and penetrating analysis. But, nope, that ain’t the case. Go figure.

Though there are some admittedly impressive visual effects – the best being the UFO as it transforms and the rendering of a murderous chimp called Gordy – Peele appears too self-conscious about style.

To wit, Peele loves that old device about not showing too much of the main object of interest, and so keeps the UFO in darkness, on the edge of the frame, in the background and often out of focus.

It’s a neat trick, sure, though it wears a little thin the 700th time he uses it.

Credit to Peele on one account, however: he shot the movie on 65mm Kodak film stock. Good man.

There’s nothing all that sweet in the performances either, with the marvelous Daniel Kaluuya (so good in Judas and the Black Messiah) the most prominent case of waste.

The one bit of interesting casting in Nope – or Close Encounters of the Bored Kind, as it deserves to be known – is Michael Wincott, who plays a photographer who owns a hand-cranked camera.

A fabulous Canadian actor, Wincott was brilliant as the screaming hippie in Oliver Stone’s Talk Radio (1988) and sterling as Guy of Gisbourne in Robin Hood: Prince of Thieves.

Still, his punchiest performance is opposite Robert De Niro in the 2008 Hollywood satire What Just Happened in which he plays a hotshot young director who arcs up when the studio threatens to recut the ending of his Sean Penn film. Check it out in ABC iView. It’s a hoot.

As for Nope, just one word – avoid.