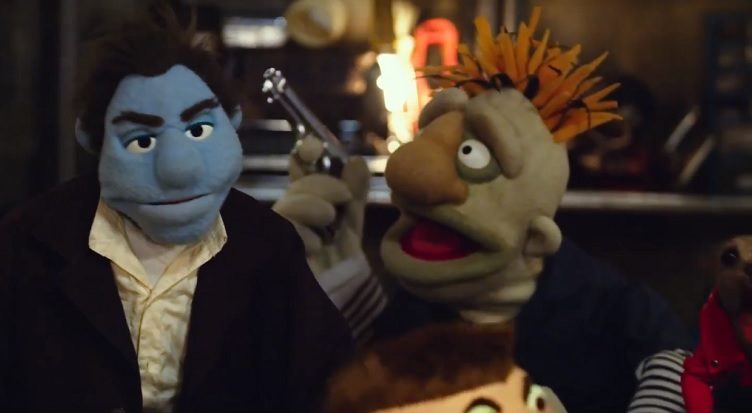 Manic muppets: things are about to get violent in the funny adult comedy The Happytime Murders, which was directed by Brian Henson, son of muppets creator Jim Henson.

We all pine for something different and original at the multiplex where repetition is the name of the game, and this nutty, adult crimedy might just do the trick, providing those with a slightly warped, definitely low-brow sense of humour some cinematic sustenance as well as some big laughs.

The story of Happytime Murders is certainly nothing new, being little more than a collection of detective movie cliches. What makes the film distinctive, however, is its cast, most of whom are muppet-era puppets.

In an alternate reality, human-like puppets live alongside humans in a free-but-not-so-fair society where they are largely treated as second-class citizens.

Ex-cop Phil Philips (voiced by Bill Barretta) is tasked by a sexy female puppet to investigate the source of an extortion attempt, a seemingly simple assignment that places him in the middle of a murder scene.

This leads him to team up with his potty-mouthed ex-partner Connie Edwards (Melissa McCarthy in full-on loudmouth mode, God love her) and together they try pinning down the killer who, they suspect, is targeting the cast of a 1980s TV show Happytime.

The pair, of course, spit bile at each other initially but soon – OK, everybody say this aloud and in perfect unison – develop a begrudging respect for each other.

That’s just one of the dozens of cop-movie tropes dutifully replicated here, and predictable though it is it services the novelty of watching what is essentially a muppet movie for adults.

So long as you don’t mind low-flying gags about sex, smut, violence and other adult topics you’ll have a ball with this. This reviewer certainly found a lot of the film, especially the schmutzier scenes, laugh-out-loud funny, mainly because of how elaborately preposterous they are.

The film hails from the production company of the late Jim Henson, who created the muppets, and is directed by his son Brian, who clearly aims the film at those who loved The Muppet Show but wanted to see muppet humour continue developing along a more adult vein.

Oddly, even though all of the puppet characters are original, the film attracted a lawsuit from the people who make Sesame Street, fearing brand damage from the film’s use of the slogan “No Sesame; All Street”.

The judge threw the case out, and quite rightly, too. There’s no way anyone is going to confuse this film with that show, nor is it likely a kid would see the film by mistake.

A fun blooper reel over the final credit crawl offers some glimpses into the ingenious way the film was made, with puppeteers operating characters through gaps on a raised set, so that the floor was at waist level. Apart from being funny, it shows how shooting such a film practically rather than with computer animated characters clearly allowed for more naturalistic, spontaneous performances along with a lot of improvisation.

It’s a real treat, this. Just beware that while the production might have been sophisticated, the humour definitely is not.

Singer Jimmy Barnes presents his jagged early life growing up in Glasgow and Adelaide in the 1950s and 60s in a raw and uncomfortably honest self-portrait that is often terribly sad and moving.

Dealing with warring parents, alcoholism and a search for love, Barnes revisits the key locales of his life and speaks freely into the camera, as do some key participants in his life. These are cut into a performance of his live biographical stage show.

Directed by Mark Joffe (Cosi; The Man Who Sued God), the film leaves all the mandatory Cold Chisel stuff till the final reel, and is wisely kept in the perspective of Barnes’ life. Fans might find that a little frustrating, but this isn’t a band doco, it’s a life story.

Despite the highs and tragic lows he describes, Barnes holds it together for most of the film, his most moving revelations being the story behind his surname and his central regret in life.

As far as tributes go, this definitely is a worthy one, driven by the values of survival, persistence and hope.

This realist urban drama by director Jason Raftopoulos follows a work day in the mostly miserable life of Jim (Damian Hill from Pawno), a lowly courier who is about to hit bottom.

Stuck taking care of his son for the day, he is forced to use his own car, a classic Ford, to make deliveries while trying to figure out how he is going to settle a $15,000 debt by the end of the day.

Strong scenes abound, though there are some major stumbles in the film’s tonal shifts as well as some inconsistencies in the story.

Still, the film can’t be faulted for its ambition or its widescreen cinematography as the pair glide through Melbourne suburbia and play on each other’s nerves.