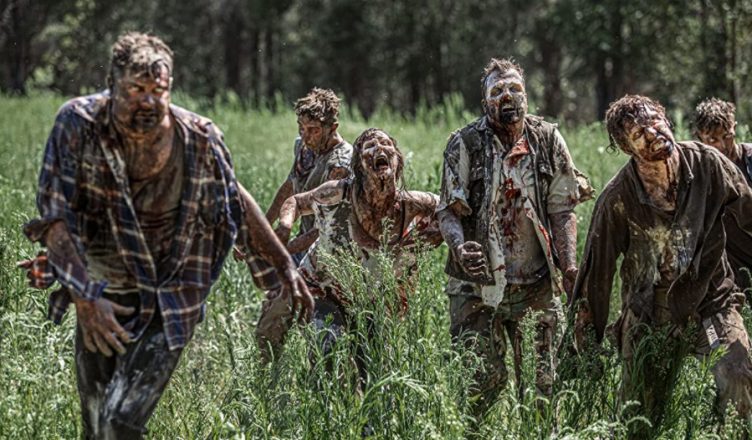 Welcome to the party: The Undead in the hunt for lunch in ‘Wyrmwood: Apocalypse’.

WYRMWOOD APOCALYPSE ***1/2 (88 minutes) MA
To try and make sense of the plot of Wyrmwood Apocalypse is to almost miss the point of this crazy-ass, gore-splattered Ozploitation lark, a bigger, brassier, bloodier sequel to 2014’s Wyrmwood: Road of the Dead.

We’re in the usual spot for a zombie party, being some ill-defined time in near-future where society has collapsed to that special point where you can’t get a decent coffee but you can still drive around in a suped-up vehicles and fire any number of impressive weapons.

The Undead are all over the shop, of course, with the post-apocalyptic setting here being the great Aussie bush rather than the endless desert.

At home in an impressively shambolic bunker, Rhys (Luke McKenzie) is back, his job here being to provide zombies to a subterranean military facility for experimentation. In return, he’s given medication that keeps him on the right side of human.

But is Rhys on the right side, morally? That’s one of many questions answered somewhere along the line – and kudos to you if you can keep track of all that’s going on in what is essentially an in-your-face blizzard of action, with fireballs, muzzle-flash and popping heads filling the screen for most of the film’s tight running time.

Breathlessly directed (again) by Kiah Roache-Turner, who (again) co-wrote the screenplay for the soiree with brother Tristan, there’s not a dead second in this frolic of the Undead, all spiced by the presence of two angry sisters (Shantae Barnes-Cowan & Tasia Zalar), a mad doctor (Nicholas Boshier), sexy semi-zombie Brooke (Bianca Bradey reprising her role) and a giant zombie cyborg.

Frenetically paced like a double-caffienated music video and with a love for exploding heads and splattering blood on the lens – nice effect, that – the film is clearly designed to leave fans of the zombie genre not just satisfied, but positively saturated.

Think of the early films by Peter Jackson (Bad Taste, Dead Alive), George A Romero (Dawn of the Dead), George Miller (Mad Max) and Sam Raimi (Evil Dead) all pressed into a blender and you’ll get the general vibe of Wyrmwood: Apocalypse.

Technically proficient with sharp editing and great camera coverage setting-off reels of well-mounted action, it’s carnage-filled zombie mayhem to the max, all done with a straight face and a cheeky wink to the audience signaling how the film knows precisely what buttons to punch, when, and how hard.

And still, beneath all that, the film does leave you with something to think deeply about.

In the Wyrmwood version of life after the apocalypse, zombies are used to generate power in a manner that is both efficient and cost-effective, given that they are freely available.

And, as we see in Rhys’s abode, they don’t appear to produce any carbon emissions, so no need to bother with offsets.

Perhaps Wyrmwood III will further explore this potential new source of clean, green energy, repurposing the Undead to help light our way through the darkness of our uncertain future.

And, of course, if they don’t play ball we can just blow their heads off.

Director Kiah Roache-Turner was kind enough to block out some time to chat. Please enjoy.