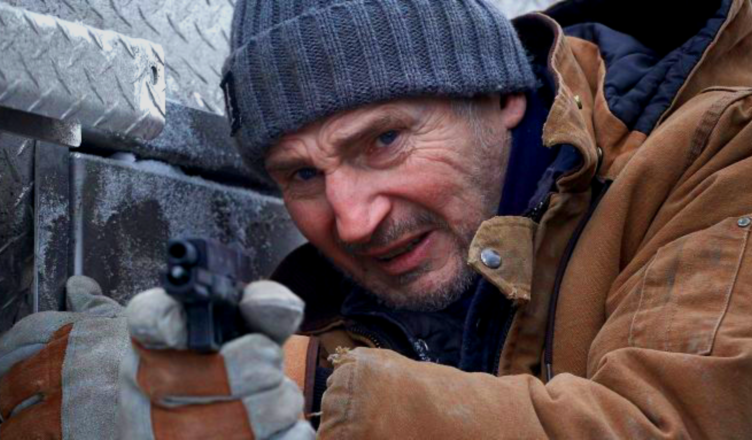 THE ICE ROAD *** (109 minutes) M
In the Liam Neeson truck chase action thriller The Ice Road Liam Neeson plays a driver who is chased by some bad people while driving a truck carrying life-saving equipment to a troubled mine site in Far North Canada where 26 men are trapped and running out of oxygen and will surely perish if the equipment doesn’t get there in time.

If you need more, where have you been for the last 12 Liam Neeson action movies?

Such a reductive, over-simplified generalization could not be further from the truth.

Set mostly in north Manitoba, that frost-bitten part of Canada we just don’t see enough of, a group of hard-working miners get trapped in their workspace when a methane explosion causes a cave in.

They’ve only got a few hours of oxygen trapped in there with them and the only way to save them is to take charge of a potentially lethal pocket of methane above them.

To do this they need a very special, very heavy piece of equipment that must be trucked in over ice-covered roads that have been closed for the year and are hence now very difficult and dangerous to traverse, especially in a large, heavy truck.

So three trucks are sent with the special equipment, the thinking being that those odds should offset the peril of driving large trucks over thinning ice.

In the lead truck is Jim (Laurence Fishburne), followed by feisty indigenous Tantoo (Amber Midthunder), whose brother is trapped in the mine, and Irishman Mike McCann (Liam Neeson) who has his brother Gurty (Marcus Thomas) riding with him. Gurty is a top mechanic and a veteran suffering from aphasia and PTSD.

Also riding with them in Tantoo’s rig is the insurance company man Tom Varnay (Benjamin Walker). He is supposedly there to oversee his company’s investment.

Now, if this was a straight-out rescue mission there’d be no conflict and, thus, no movie. So along with all the tense dangers of the drive there’s the usual dose of corporate skullduggery woven into the story as we cut between the trucks, the mine and the company office.

Pretty much like the trucks in the film – all Kenworths, by the way, so cheers to some wily product placement – you can see the story coming a mile away.

Is it cliched? Is it predictable? Is it formulaic? Yes. Absolutely. No question.

And is it entertaining? Thoroughly. Especially if you happen to like slightly above average Liam Neeson action movies.

While it’s common practice to consider a formulaic film with derision, the truth is that so long as the movie formula is dispatched with sufficient care, love, skill and commitment, the ride can be perfectly pleasant and enjoyable. and that’s the case here.

It also helps if you are a fan of Liam Neeson action movies, something writer/director Jonathan Hensleigh clearly is.

He’s certainly got the runs on the board when it comes to mounting action and moving a cleanly structured story; his credits include writing Die Hard With a Vengeance, Jumanji (the original 1995 version), The Saint and Armageddon. He also wrote and directed Kill the Irishman and The Punisher.

Though there’s some unavoidable digital work here, it’s very well done and blends nicely into the film’s many well-edited moments of impressive action involving real trucks as they thunder precariously up and down the ice roads.

As for Liam Neeson, he seems increasingly eager to invest his action movies with a grim, gritty conviction, his performance in The Ice Road being especially meaty as he copes with the ice road, corrupt corporate types and his disabled brother.

The indigenous Tantoo also provides a punchy B-story about casual racism, aided chiefly by the oily performance from Benjamin Walker, a very versatile comedian and stage/screen actor who we saw in Abraham Lincoln: Vampire Hunter, Flags of Our Fathers, In the Heart of the Sea, the romantic drama The Choice and Kinsey, in which he co-starred with Liam Neeson. So it’s like full circle for him.

OK, OK The Ice Road isn’t Wages of Fear, but that’s an unfair comparison given how Wages of Fear is the best film about truck driving ever.

Instead, think of The Ice Road more as a well-directed mashing of the best episodes of Ice Road Truckers (clearly an inspiration) with Black Dog, that unfairly trashed Patrick Swayze truck chase movie from 1998, which staged all its action in analogue.

If there is any mystique in the film, it’s the on-going one regarding the late-career connection between action film lovers and the ageing Liam Neeson, who is almost 70. There truly has been nothing quite like it and we should be grateful.