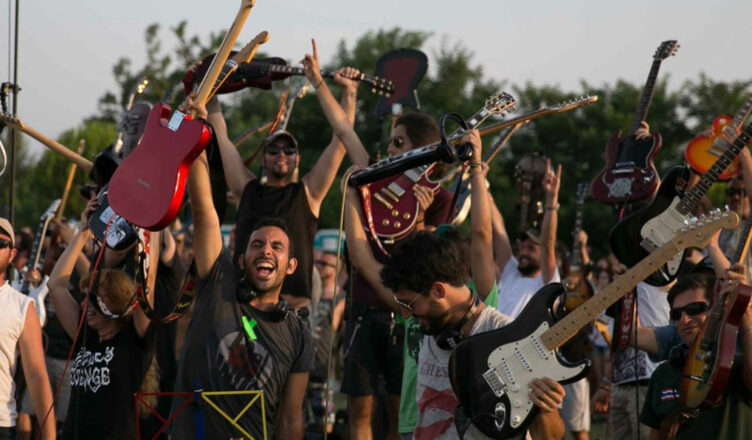 One voice: Musicians band together in the music documentary ‘We Are the Thousand’.

As Covid restrictions continue to pare the 69th Melbourne International Film Festival to the bone – with all cinema screenings now cancelled – we can at least settle in for the treats available online. Here are three. Well, two.

WE ARE THE THOUSAND **** (80 minutes)
In one of the more beautiful and astounding expressions of pop fandom, Cesena citizen Fabio Zaffagnini formed a 1000-strong band to perform the Foo Fighters song Learn to Fly, an ostentatious, ingenious ploy designed to persuade Dave Grohl and the band – who knew nothing of what was going on – to come play in the little Italian town.

As history records, and as duly chronicled in Anita Rivaroli’s concise, comprehensive, moving documentary, the charm offensive worked a treat, and then some.

Rivaroli’s cameras are there from the get-go, capturing the germ of the idea, the apprehension of pulling it off, the fear that, as one participant so cogently put it, the thing might turn into a giant shit show.

Certainly the logistical and acoustic nightmare of having hundreds of guitarists, drummers and singers performing in near-perfect synchronicity is vividly captured.

Indeed, of all the achievements embedded in the event, perhaps the most impressive and improbable was the harnessing and momentary suppression of ego needed to make the shebang work. That collective, Zen-like annihilation of ego on such a scale is truly stirring to behold, embodied in the shots of hundreds of drummers playing in unison.

It comes as something of a relief to learn that the tear-inducing effect of watching the full performance was a common reaction. Even Dave Grohl confessed to it. So don’t feel ashamed if you find yourself crying like an idiot.

As well as being a tribute to the people who organized and participated in the performance, the film is testament to just how classy the members of the Foo Fighters are by embracing the gesture and delivering the type of whole-hearted response everybody was dreaming for.

THE INHERITANCE** (102 minutes)
If ever you need a powerful argument against living in a collective household full of people dedicated to socialism, The Inheritance is it.

Half-interesting, half-boring, the film looks and sounds like it was made in the early 1980s as actors of varying quality perform vignettes about communal living while documentary inserts tell of the MOVE Black rights organization that was bombed by the police.

The squabbling amongst the house members often sound like takes from Monty Python and the Holy Grail and show just what a pain in the tookus sharehouses can be, politics or no politics. That’s fun.

Far less fun are the straight-to-camera pieces, which include the rehearsal of a play and the solemn reading of some really ordinary poetry. Sitting through it is a stark illustration of the sacrifice revolution demands.

Well, for some people, anyway.

Alex (Raiff) is a college newbie doing it tough, suffering separation anxiety from his loving family and proximity anxiety over his unkempt, booze-guzzling roommate (Logan Miller, a gifted scene-stealer).

One unremarkable night Alex happens upon Maggie (Dylan Gelula), a dark-haired sophomore with a penchant for impulsive sex and long late-night talks.

While out to bury her former pet turtle the couple yap breezily about life and college. For her it’s a lovely conversation. For Alex it’s a little more.

The dialogue flows freely and naturally as their encounter develops into something more complicated, with Raiff proving himself adept at capturing those nuances and small gestures that can escalate a situation.

Though its verbiage has inadvertently condemned Freshman Year to be compared to Richard Linklater’s massively overrated wordfest trilogy – Before Sunrise/Sunset/Midnight – it is, in fact, a much sturdier work, a heartfelt ode to first-love anxiety, a condition that here expresses itself emotionally and physically.

The film does have one running irritation, which is the constant use of the phrase “right now” as the punctuation mark to almost any sentence. Yes, it’s very current, but the repetition might do your head in a bit.