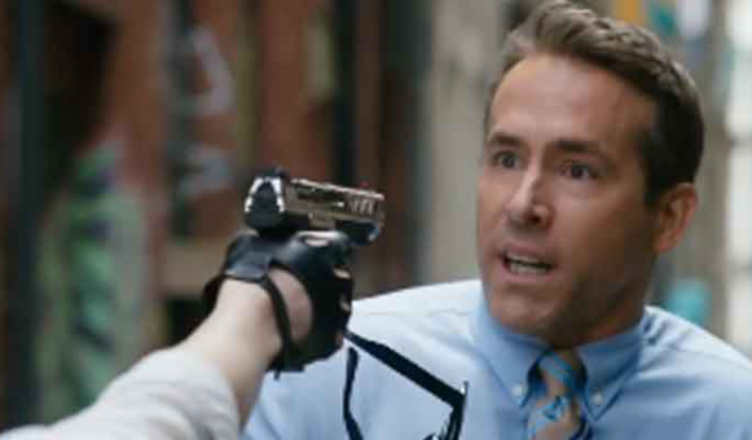 FREE GUY ***1/2 (115 minutes) M
For far too long Hollywood has ignored one of the most crucial stories of modern life. Now, finally, we have Free Guy, a motion picture brave enough to step up and explore, without fear or favour, what life is really like for a background character in a computer game.

And it’s about time. How long could we have coped without this important story coming to light? Thank you, Hollywood.

Actually, as a piece of unashamed fairy floss escapism, Free Guy unspools as a goofy, funny, self-referential action comedy spectacle crammed with florid, over-the-top visual effects and graced with just enough heart to make you care about what happens to the characters on both sides of the flat screen.

Essentially a cinematic gene-splicing of such reality-questioning films as Matrix, The Truman Show and Groundhog Day, Free Guy takes us into the life of Guy (Ryan Reynolds, in yet another self-consciously daffy performance), an insignificant background character in a hugely successful game called Free City.

Working in a bank and deeply in love with the rigid structure of his repetitive daily life, Guy accidentally experiences how his world looks to the heroes who crash, explode and shoot their way around the city.

On the other side of the screen are programmers Millie (Jodie Comer), Walter (Joe Keery from Stranger Things) and Mouser (Utkarsh Ambudkar).

Inside the game Millie exists as Molotov Girl, a trigger-happy hero in search of proof that Free City was stolen from her and Walter by mega-entrepreneur Antwan (Taika Waititi). He runs Soonami, a highly profitable game development megalith.

As Guy becomes self-aware, his real-world popularity as “Blue Shirt Guy” increases to the point where it threatens the release of Antwan’s new game, so plans are afoot to destroy Guy’s world.

Deployed with precision pacing and featuring some truly unique VFX sequences, Free Guy is a fast, fun ride as Guy slowly works out what is really going on around him.

It’s pure fairy floss fantasy escapism. Yet it’s fairy floss with substance. No to the point of pretention, thankfully, but with just enough thought to keep an adult mind from thinking about tomorrow’s grocery list.

Amidst the film’s dizzying array of visual confection – there is so much impressive A-grade digital work here it could qualify as an animated feature – director Shawn Levy, who co-produced the film with Reynolds, manages to underscore the hyper-fantasy mayhem with some surprisingly engaging ideas about reality and identity.

Key among these is the notion that if Guy is a self-conscious artificial intelligence does the virtual world he inhabits qualify as being real? And if so, would his destruction constitute murder?

And without wanting to put any tickets on the film, it pulls off a nice side-step into “I think therefore I am” territory, though philosopher René Descartes never cracks a mention alongside all the other references to movies and video games. Pity.

The whole mindplay of what’s real and not real is a common themes in movies – Arnie’s Total Recall remains a classic of the sub-genre – and Levy allows the concept enough dramatic oxygen to rouse sufficient sympathy for the characters stuck in the game and what ultimately happens to them.

As usual for a high-level fantasy film, Free Guy is a scribble of story threads. Still, there’s an unusual degree of clarity in the telling – quite an achievement given what a throwaway piece of mulch the film could have been in lesser hands.

As with millions of other major movies, Free Guy was delayed by at least a year thanks to Covid. Still, it has finally reached us, its message arguably even more pressing.

Grateful we should be to the insights offered by the film for now we cannot, in good conscience, ever regard the minor background characters in computer games with disrespect. For if Free Guy teaches us anything it is that they, too, have souls.