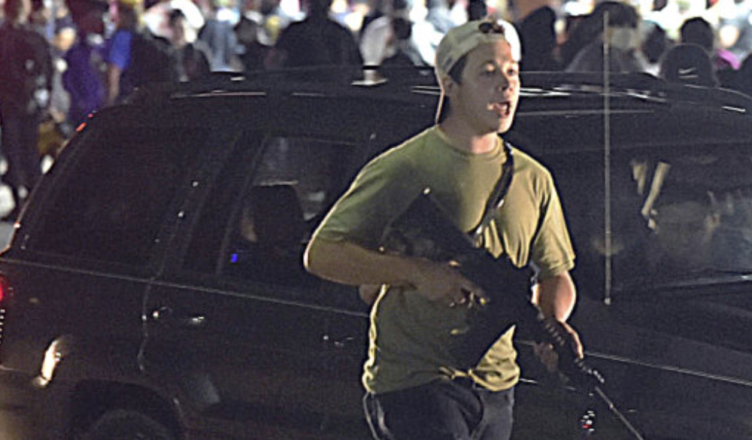 Not Guilty: Kyle Rittenhouse in Kenosha, Wisconsin, on the night of 25 August, 2020.

We are all already familiar with how Kyle Rittenhouse reacted when he was found Not Guilty of all five charges levelled against him.

Rittenhouse was up for murder for his killing of two men and wounding of one during the violent street protests in Kenosha, Wisconsin on the night of 25 October 2020.

As the verdicts were read out we watched Rittenhouse break down, his face contorting as he collapsed into his seat.

This is what it looks like to have an iron girder of doubt and anxiety about your future suddenly lifted from your shoulders. It was powerful to witness.

Having spent almost a year living with the prospect of spending the rest of his life in prison for murder, the verdict literally handed Rittenhouse his life back. His defense of self-defense was validated.

Those who had been closely following the courtroom coverage in real-time and on YouTube – the ultimate Reality TV medium – understood this extreme physical reaction to immense emotional relief.

At the other end of the spectrum, one can only imagine the reaction of US President Joe Biden found out about the verdict.

Regrettably, there were no cameras trained on him the moment he got the news, but it’s a fair guess that while Rittenhouse shuddered with relief, Joe Biden was likely to be overtaken by a somewhat different sensation.

The fallout of the Rittenhouse verdict has only begun. Protests, some of them violent, have swept across the US; support for Rittenhouse has been massive; Twitter has, as usual, gone berserk. There have been raging emotions, death threats, calls for revolution, cries that the system is broken. You know, the usual.

Some hail the verdict as a massive win for justice, common sense and the cherished Second Amendment (the one about the right to bear arms).

Others deride it as yet another example of a racially biased system protecting the white guy. The Black Lives Matter movement is processing it as another attack on their flock. A popular argument is that had Rittenhouse been black he would surely have been killed by police that night.

The Kenosha riots, which included the trashing and looting of stores, immolation of vehicles and the destruction of businesses, were triggered by the police shooting of Jacob Blake on 23 August.

Blake, who is black, had a warrant for his arrest on several charges including domestic violence and sexual assault. He resisted the officers who were sent to arrest him and, armed with a knife, was shot seven times when one of the officers believed he was going to be stabbed.

The shooting paralyzed Blake; the officers were cleared of any wrong-doing.

The streets of Kenosha were subsequently besieged by protests, some peaceful, some destroying property through fire and looting.

Rittenhouse, then 17, was one of many who responded to the online call to protect the community, in particular businesses vulnerable to attack.

On the night of 25 August, while patrolling the streets with his rifle (a semi-automatic AR-15 style weapon that discharges with each pull of the trigger) and a medical kit to render first aid on request (Rittenhouse wants to be a nurse), he was confronted by an angry mob of protesters.

One of them, Joseph Rosenbaum, verbally threated to kill Rittenhouse and pursued him. When he grabbed Rittenhouse’s gun he was lethally shot four times.

As Rittenhouse continued to flee the mob towards police vehicles he tripped in the middle of the road and was attacked with a skateboard by Anthony Huber, who then grabbed at the weapon. Rittenhouse shot and killed him.

Then Gaige Grosskreutz ran towards Rittenhouse pointing his Glock pistol at him; Rittenhouse shot him in the upper arm.

Rittenhouse then tried surrendering to police, but was waved on. He gave himself up shortly after at a police station in Antioch, Illinois, where he lives.

So, what happens now?

There are a lot of variables in the air right now about what will happen, but one thing is certain: President Joe Biden has squarely put himself on the wrong side of the verdict.

There are two giant problems President Biden faces over this matter.

The first is his startling choice of words in reaction to the verdict.

On the White House lawn he told a media huddle: “I stand by what the jury has concluded. The jury system works and we have to abide by it”. All good – so far.

But about an hour later an official White House statement from Biden was released stating:

“While the verdict in Kenosha will leave many Americans feeling angry and concerned, myself included, we must acknowledge that the jury has spoken. I ran on a promise to bring Americans together, because I believe that what unites us is far greater than what divides us.”

The compendium of gaffes President Biden has accrued since taking office in January 2020 is formidable, yet they are generally written off by compliant media outlets as ramblings from a loveable stumblebum.

But this isn’t that. Siding with those who oppose the verdict is likely to cost him very dearly.

When you boil it all down the evidence that Rittenhouse acted in self-defense is pretty in-your-face and too compelling to douse, as the prosecution found time and time again.

The video evidence clearly shows Rittenhouse running away – or trying to – each time he is attacked.

Now, you don’t need a law degree or even to have watched an entire season of Law & Order to twig that somebody running away from you isn’t posing a threat, that the threat is posed by the angry pursuers baying for blood.

So when they catch up with Rittenhouse, how else was he supposed to respond? Initiate a conflict resolution dialogue?

The one moment during the trial that truly crystallized the case was when witness for the prosecution Gaige Grosskreutz, who Rittenhouse had wounded, was shown an unambiguous image capturing the moment of their confrontation. (above)

Grosskreutz is pointing his loaded Glock automatic pistol directly at Rittenhouse who is lying on the road, firing at Grosskreutz with his rifle, hitting him in the arm, “vapourizing” his bicep.

However tenuous the prosecution’s case was – helped not one bit by Judge Bruce Schroeder having to angrily school prosecutor Thomas Binger about the US constitution and the inalienable right to remain silent (how will he ever live it down?) – it was surely this courtroom moment that seemed to scuttle all hope for a Guilty verdict.

By all considered accounts, the outcome of the Rittenhouse trial was a prime example of the law doing its job, of justice being served. Those watching the case unfold in real time saw that the no-nonsense judge was unbiased and a stickler for due process and protocol.

Yet there have been shrieks of protest over the verdict – no surprise there, given today’s highly polarized discourse where nuance, rational thought and critical thinking have no place amidst all the screaming that insists how America is the most oppressive society on Earth.

But for Biden to side with the protesters – that he, too, is “angry and concerned” about the verdict – is, to put it mildly, poorly thought through.

It means that any citizen who sees the court’s verdict as just, fair and reasonable, who agree that justice has been served, are automatically at odds with their President.

That’s going to put a lot of people off, including those Republicans who turned their red states blue to get Trump out of office.

And it’s not as though the statement was made off-the-cuff. Biden wanted to put his “anger and concern” over the verdict adamantly on the record.

His earlier comment about accepting the decision should have been it, but Biden just couldn’t help himself. Either that or his advisors have more sway over him than they should.

An arguably bigger problem facing President Biden right now is the very likely prospect he’ll be hit with a rather large lawsuit for defamation.

In another act that raises severe questions about his judgment and his advisors, last year on 30 September Biden’s official Twitter feed posted a video associating Kyle Rittenhouse with the white supremacy movement.

There’s no other way to put it: the President of the United States refused to disavow white supremacists on the debate stage last night. pic.twitter.com/Q3VZTW1vUV

There is no evidence – none at all – that Rittenhouse has anything to do with white supremacy, yet Biden has never addressed the issue, apologized or retracted his assertion.

Indeed, when given the opportunity to do so by a reporter who directly confronted him about the accusation shortly after the verdict, Biden simply ignored the question.

The legal team advising the Rittenhouse family have clearly canvassed the issue with them; mother Wendy Rittenhouse has addressed defamation action on TV, and in detail. She sounds keen.

Should a defamation action proceed it would be one of the things that define Biden’s run in 2024 – and the depth of the damage it would cause is difficult to calculate.

For at the core of American values is the presumption of innocence and the right to a fair hearing.

The behaviour of President Biden in response to the Rittenhouse verdict puts him squarely at odds with those values.

And it’s a fair guess that those in the Trump camp are salivating as they observe the situation, strategizing over beers and burgers how best to exploit it. Given the depth of Trump’s Red State support, 45 must be considering this as an early Christmas gift.

Biden has served up one heck of a rod for his back.

At present almost all the surveys and polling paint a bleak enough picture of Biden’s chances against a revitalized Donald Trump, both in 2024 and if an election was held now. His response to the Rittenhouse case has handicapped himself even further.

Admittedly, Biden’s gaffes and goofs have received very soft treatment from major media outlets – the same ones, incidentally, that have run a very hard line against Kyle Rittenhouse, describing him as a “vigilante”.

This time around even they might find President Biden’s blundering too big to ignore.