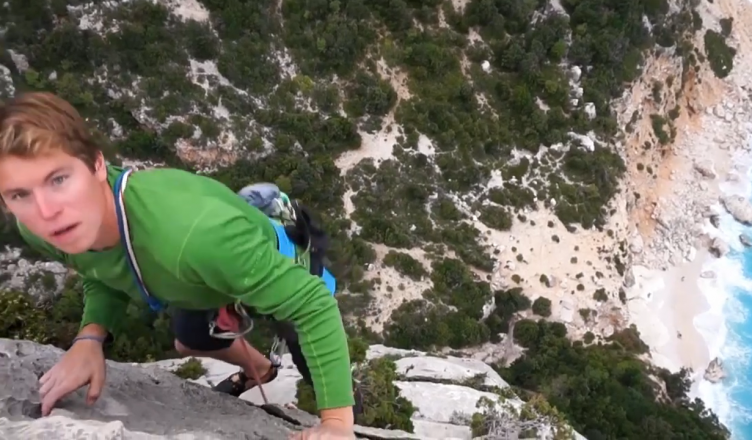 To the heights: Tom Ballard scales a cliff face in the documentary ‘The Last Mountain’.

THE LAST MOUNTAIN ***1/2 (107 minutes) M
One of the instinctive reactions to the untimely loss of a loved one is to couch the tragedy in some sort of rationale in a bid to provide an explanation, and perhaps even make sense, of a terrible event.

That’s what we see happen in the second half of The Last Mountain, an engrossing, highly scenic feature-length documentary about a mountaineering family struck by two tragedies, 24 years apart.

In 1995 pioneering mountain climber Alison Hargreaves perished while descending from the peak of K2, the world’s second highest mountain. The British mother of two had already conquered Everest in a world-first assault by doing it without oxygen and without company.

In 2019 her mountaineering son Tom Ballard died on Nanga Parbat in the Himalayas, a site that had claimed scores of lives. He perished with fellow climber Daniele Nardi, an Italian adventurer who had long dreamt of getting to the peak via an untested route.

Inspired by his mother, Tom Ballard had already racked up many achievements and was renown for his methodical and measured approach to mountain climbing.

Using huge amounts of archival footage – both home video and material from the 1996 documentary Alison’s Last Mountain, about Alison Hargreaves – director Chris Terrill spends the first half of the film registering grief.

After giving a moving account of the life, extraordinary achievements and loss of Alison, he nutshells the death of Tom, which left his father Jim, sister Kate and mountaineering girlfriend Stefy devastated – and somewhat bewildered.

The film then segues into a detailed, absorbing unpacking of the ill-fated climb, raising the question of why a studied, by-the-numbers mountaineer such as Ballard would embark on an endeavour that sat squarely outside his risk parameters.

Exploring plenty of speculation and counter-speculation, the film tentatively broaches the theory – and that’s all it is, Terrill is at pains to stress – that he might have fallen under the spell of Daniele Nardi, who sported a more dare-devilish reputation.

Implicitly showing the comfort and closure that can come with hindsight, especially when paired with tunnel vision, there is understandable support for this idea from Tom’s loved ones.

Still, the notion is challenged along with the more hard-nosed and sobering claim that Nardi’s influence is a non-issue, that Tom Ballard knew the risks involved in the enterprise and made a decision to be on the mountain at a time when conditions were at their worst.

There’s no denying the tragedy of what occurred but what elevates The Last Mountain is its coverage of the culpability issue.

The film illustrates how, on the one hand, we applaud and admire thrill-seekers for the risks they take, often defying death in their ventures, yet when things go wrong the impulse is to look for something or someone else to blame.

Is that wise?, the film asks. Can we laud Tom Ballard as an experienced, accomplished and passionate mountaineer, then deny the possibility he made bad decisions or committed errors of judgement?

One of the fascinating aspects of The Last Mountain is how it spotlights the way 21st-century mountaineering can be recorded in real time.

In the pre-digital era the thoughts and feelings of climbers would be recorded in diaries or on analogue devices that could only be read or watched after their return. Should they perish, such material would need to be recovered, provided the bodies of the fallen climbers could be reached.

Yet while the bodies of Ballard and Nardi could not be recovered, they each maintained a real-time online chronicle, offering us the type of detail and insight into a perilous mountain assault that was impossible when Alison Hargreaves fell victim to her passion.

There is a distinctly haunting quality to these images and texts as the pair moved towards a fate described earlier with one arresting, entirely appropriate word: cruel.